Recording Techniques: The Effects Of Microphone Placement On Banjo Tone

There are many mic placements to try, but if you're looking for a new direction this is a great starting point.

Some time ago I decided I wanted to find out how the location of a microphone near a banjo affects the tone quality you hear.

To make these tests scientific as well as subjective, I measured the spectrum of the banjo in several different mic locations. The spectrum of a musical instrument is its output vs. frequency.

It affects the tonal balance or timbre. It is the relative levels of the fundamental frequencies and harmonics, and can be measured with a real-time analyzer.

As an experiment, I measured the spectrum of a Chuck Lee open-back banjo in several different mic locations to find out what the differences were. I also compared the sound by recording the mic signals and listening to the playbacks at equal listening volumes.

For example, this screen capture shows the frequency spectrum of a banjo picked up at 1 foot (green) and at 3 inches (yellow). 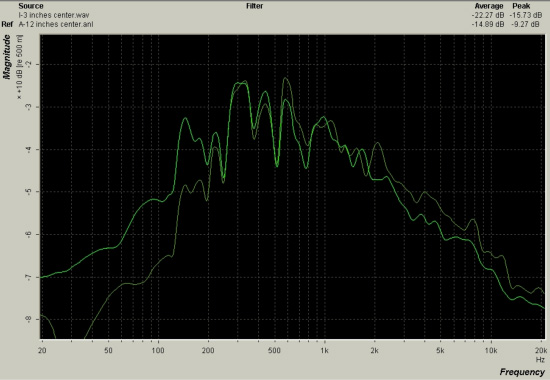 Six inches from the center
Warmer or thumpier than the reference. +8 dB from 100-180 Hz.

Comments: The closer the mic is to the banjo head, the more warmth or bass you get. That’s not due to microphone proximity effect in this case, because I used only an omnidirectional mic, which does not have proximity effect.

The same thing also happens with an open-back guitar cabinet.

Three inches from the center
Bassy and dark. The hand gets between the strings and the mic, so the highs are diminished about -4 dB from 2kHz to 10 kHz.

Six inches away, halfway between the bridge and lower rim:
Good match with the reference, but a little warmer due to a +6 to +9 dB rise from 100-180 Hz. A nice, natural sounding mic location (in my opinion).

Six inches from the lower rim
Thin, due to an 8 dB loss from 160-360 Hz compared to the reference mic location.

Six inches from where the neck meets the pot
Similar to the reference, but a little warmer due to a +7 dB boost from 100-200 Hz. This is another natural-sounding location, but is not as loud as halfway between the bridge and lower rim. 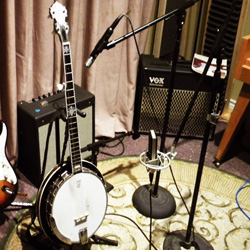 Three inches from where the neck meets the pot
Similar to the reference but +6 dB from 100-140 Hz.

Obviously, the purpose of these measurements is not to tell you how to mike your banjo. That depends on your instrument and your personal taste in tonal balance. Each instrument is different, too.

However, hopefully these tests may shed some light on how mic placement affects the reproduced timbre of an open-back banjo.

So, here’s a quick summary of what I found.

• Mic 12” from the center of the head: A little thin or weak in the bass. (But a cardioid mic with proximity effect might not sound thin here).

• A “natural” sound is available halfway between the bridge and lower rim, or where the neck meets the pot.

• Miking near the rim sounds thin.

• Close miking sounds bassier than distant miking but provides more gain before feedback and more isolation from floor monitors and other instruments.

In the end there are many more mic placements to try, but hopefully this give you a starting point if you’re looking for a new direction.