This is the second in a series detailing the latest technology in wireless microphone systems. To read the first installment, covering the AKG DMS 700 system, click here.

(Note that the “D” in “Digital” for this MIPRO system is capitalized because it is part of the official product name, rather than the generic system name.)

Specifically, the MIPRO ACT Digital covers 620–692 MHz – fairly close to the upper limit of what the FCC Part 74 rules now allow for this type of use.

In terms of features and operation, it’s somewhat similar to the Lectrosonics 700 Series digital wireless system, but with some interesting differences.

The rechargeable approach is usually just fine for churches or other installed sound applications, but sometimes it’s not as popular for touring or portable music application, where the convenience of “getting some new/fresh AA batteries from the corner shop” is more ingrained.

Although the bandwidth of this system is indicated as “620–692 MHz,” it’s actually broken into three fixed bands, each 24 MHz wide.

Each receiver and transmitter can only tune within its specified range. This is similar to many other systems, such as those from Zaxcom, Lectrosonics, Sennheiser evolution, etc.

Most analog systems introduced in the past few years, however, such as the Sennheiser 2000 Series and Shure UHF-R, have much wider bandwidths, with 70 MHz or even 90 MHz being quite common.

The AKG DMS 700 offers a whopping 155 MHz, which is not matched by any other system at this time. The trade-off is that the wider the bandwidth, the more unwanted signals are being “digested” by the receiver front end. In general, users should choose the narrowest bandwidth that still meets their needs.

Like the AKG system, the MIPRO offers digital outputs and a word clock connection – nice features now that consoles are more and more accepting digital sources. Again like the DMS 700 (as well as Sennheiser 2000 Series and Shure UHF-R and ULX Pro), the ACT Digital has an IR port for synchronizing the settings between the receiver and the transmitter. This can be a nice, time-saving feature.

The color display on the receiver front panel is a good feature that is hampered by a limited interface. A single knob to change all settings?

The product documentation is also quite limited – while the company’s marketing literature is fairly clear, the owner’s manual is truncated, lacking in detail.

Audio Performance
The ACT Digital system uses a sample rate of 44.1 kHz and a 24-bit A/D conversion process. This yields a flat frequency response of 20 – 20 kHz with a tolerance of -2 dB, better than most analog wireless systems, particularly at the bottom end. Most analog systems exhibit something like a 40 or 50 Hz low end response and a 16 or maybe 18 kHz on the top end.

Because the ACT-Digital system does not use a compandor, the associated artifacts are gone as well. The dynamic range of this system is a very nice 110 dB, A-weighted.

Latency or “group delay” for the system is listed at 4 milliseconds (ms), which is on the order of many other types of digital signal processing, including consoles, and is largely a factor of the 44.1 kHz sample rate.

Higher sample rates would yield a lower latency, but would also require a greater data rate between transmitter and receiver. While 4 ms is respectably low, it is bested by some other systems. And for speech applications, it is well within the range that will be undetectable.

The only problem might be if this system were used with a digital console along with any additional analog processing.

The resulting latency might be in the 8 to 10 ms range – within the area of detectability for many users, particularly singers using in-ear monitoring (IEM) systems.

Encryption
The ACT Digital offers selectable encryption at a 128-bit key length, now the minimum for any truly secure system and relatively “sell-able” – although it is restricted as to who can buy it, there is no special government license needed as there is for 256-bit encrypted systems. Also, 128-bit can be very robust if implemented properly.

Choosing to engage the encryption on this system is a simple as selecting it on the receiver and on the transmitter. This is a very easy-to-use feature on the ACT digital wireless.

Conclusions
While there aren’t any real ground-breaking features or technology here, the ACT Digital wireless system is a nice package and can certainly provide quality audio and data encryption where needed.

Keep in mind that it competes with other signals in the UHF band, and offers only three 24 MHz bands within the larger tuning range of 620-692 MHz, so whether or not this system will work well in larger, multi-channel applications and with competing signals (potential interference) in the same band needs to be tested. 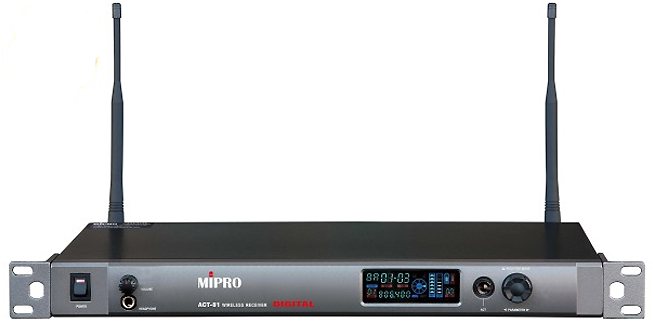 Most digital wireless system manufacturers claim that their products are “impervious to inter-modulation problems” and “not affected by crowded RF spectrum”. But since there are no known larger-scale systems out there, this remains to be seen

The audio specifications look very solid and are indicative of what can be done with digital as opposed to analog with respect to wireless systems. The latency is fairly low and should not affect most applications. Other comparable systems include the Lectrosonics 700 Series and the AKG DMS 700.

Note that this is nearly double the listed pricing for that AKG DMS 700, and is in the ballpark of the pricing for the Lectrosonics 700 Series. Therefore – and as always should be the case – only you can decide if the feature set, audio quality and other factors make this the right product for you.

Find out more about the MIPRO ACT Digital system here.

Other posts by Mike Wireless:
Inside The AKG DMS 700
Is The UHF Spectrum Going To Ease Up After June 12?
Change The Only Constant In Marketplace For Wireless System Spectrum