While curveballs, surprises, delays, and sometimes even chaos may erupt onsite, having a system for getting things done is key to taking on the unexpected and to continue to make progress towards being ready for showtime.

For me, there are few moments more exciting than the opening sequence of a well-produced corporate event. A swell of house music, followed by eager anticipation of a sizzling opening video. The thump of music accompanied by applause as the speaker takes the stage and settles in to engage with the audience.

Being the A1 for small and medium-sized corporate events often means being the one ultimately responsible for everything happening with the audio system, which makes the payoff of those moments when everything is firing on all cylinders truly special.

Getting to that moment takes a lot of work, however, and in my previous article, I looked at the strategies I use to prepare for all the different hats I end up wearing through the course of working these productions. When load-in day arrives, it’s time to take all of that planning and put it into action. While curveballs, surprises, delays, and sometimes even chaos may erupt onsite, having a system for getting things done lets me respond to the unexpected and continue to make progress towards being ready for showtime.

Ideally, before the truck even starts being unloaded, I take a walk through the show space. While doing this, I look at whether it matches the event drawing (or is at least close) and if it matches my expectations.

On shows where I haven’t been provided with a drawing, and therefore haven’t been able to plan loudspeaker locations, I observe the eventual coverage area and think about ideal speaker locations while keeping in mind best practices for low-variance system design. That said, I must also remember that as things like video screens and sets are built, I will most likely have to compromise to a less-perfect design based on the other needs of the show.

Working collaboratively with the other department leaders and the production manager is an important part of this process. Together, we can then consider system design trade-offs in all departments and reach a consensus on where things will go before gear gets into the room.

As equipment arrives, staying organized is key. When I’m working with a vendor whose gear I am familiar with, I try to intercept cases as they come in the door and send them in the right general direction.

Conversely, when I’m unfamiliar with a vendor’s pack, I try to group all audio-related items in one spot. This lets me assess all pieces of the puzzle at once, and from there I can distribute appropriately. Running around the room in circles looking for equipment gets incredibly frustrating and is only made worse by finding that lost pair of loudspeakers after I already adapted my design and set the rig up.

On a related note, having the pile of gear in front of you is a perfect time to confirm that everything that should be there, is there. Even the best warehouses make occasional mistakes; the sooner that missing items (or those damaged in transit, for that matter) can be identified, the sooner that a replacement can be sent over.

While on the smallest shows I may be the only member of the audio crew, I often have at least a couple of stagehands to assist me. Knowing whether the production company has provided general stagehands, audio-specific utilities, or even a dedicated A2 (audio assist) helps guide me when it comes to delegating tasks to others.

As an example: for many corporate events, the A2 role includes not only placing microphones on presenters, but also things like RF coordination, stage patch, and intercom setup. With an experienced A2, I can often hand over paperwork and let them loose on these tasks. If on a similar show, I am only provided with inexperienced stagehands, I may just ask them to re-battery all the mics while I set up the rack.

The reality of small- and medium-sized productions is that two shows with the same gear list and production schedule might mean vastly different workloads for the A1, depending on crew budget and experience. Being up for the challenge is an innate part of finding success in any situation.

Method Versus The Madness

Regardless of who will be completing setup tasks, the important thing to have ready is a running list of things that need to get done. This can be a mental checklist or a physical piece of paper; either way, being able to know what’s next and which tasks can be delegated to others helps keep the crew moving and progress being made.

I approach this as much as I can in order of importance by asking myself and the production team, “What needs to be ready to go when the client walks into the room?” Knowing that I should prioritize getting a microphone ready for the CEO rather than fixing that buzz in the intercom is helpful – yet sometimes, the only client I’ll deal with on a load-in day is a producer that would rather have intercom up and running by the afternoon for tech rehearsals than every mic perfectly rung out for the stage.

When the time comes for client rehearsals, I try my best to stay as engaged as possible with the rehearsal; this is their time, not mine anymore. It’s tempting to try to knock out the side projects that still need to be carried out before I’m done for the day, but it’s embarrassing to have to get called three times to bring up a microphone because my head is down in my computer programming cues for the next morning. Once they leave the room, it’s time to get back to work on those loose ends and add the final polish before the show.

One of the benefits of building a patch list based on the scope of work before even arriving onsite is that as the show is being built, that patch list becomes a checklist. It’s easy to recognize when the speakers are all working, but I know I won’t forget to check levels for the record feed if I’m looking at a patch list that says “Record L/Record R.”

Verifying things like backup microphones, webcast sends, video playback lines, press mults, intercom packs, and overflow rooms is nonnegotiable. After a long and busy day, it might be tempting to assume that since one wireless mic is working, all of them are probably fine.

However, I never want to be in a position where something surprises me because of an assumption I made. Being fully confident in what will happen when I pull up a fader, press record, play back a cue, or turn on my headset is key to a successful and smooth show. When the unexpected happens – and it will – being able to demonstrate that I did everything I could to make the show a success before, during, and after the fact keeps me in favor with the production company and end client.

While the work put into preparing and building a show starts to pay off when the show opens, things often continue to evolve after the first exciting moments. During the show, I keep that running list handy and fill it with follow-up items for later. This can include diagnosing that buzz in the backup lectern mic, replacing batteries, preparing audio cues, and testing video playback levels.

Even after a long day of juggling microphones and faders, I take a look at this list and make sure everything is squared away before I leave for the day. This way, in the morning I can simply walk the room to make sure my system is still fully functional and then maybe even sneak in a few sips of iced coffee before showtime.

While much of the focus of this article has been on getting a production up and running, I would be remiss if I didn’t mention an important piece of the puzzle – the customer service role of the A1. Often on smaller events, my very visible location at front of house makes me the de-facto face of the production team to both the client and attendees.

As the A1, I frequently end up placing microphones on executives and speakers as well. Maintaining a professional demeanor, being well-groomed and fresh-smelling, and responding to changes with grace are all skills that require zero technical knowledge, yet instantly go a long way in conveying confidence and expertise to clients and the other members of the production team.

After the event concludes, equipment gets packed up, and the van or truck door closes, there is one last step that I have made a vital part of my process: Jotting down show notes while they’re still fresh in my mind. This can include notes about the venue, the gear, the show itself, the people involved, or anything else that comes to mind.

I find that analyzing both what went well and what could have been improved helps guide the pre-production process for my next event, and sneakily creates a cycle of self-improvement that keeps me from making the same mistakes multiple times. Having a repository of notes to look back upon helps me prepare for the next time I’m in That Room With The Awkwardly Low Ceiling, how to deal with a challenging client, or even wire a tricky amp rack.

Most importantly, though, it gives me a way to track and reflect on my career, and all the hats I’ve been lucky enough to wear along the way. 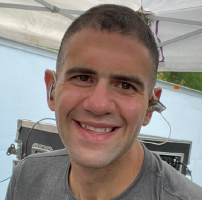