A retrospective on concert sound for the Grateful Dead over the course of almost 20 years...

This article originally appeared in the June 1983 issue of Recording Engineer/Producer magazine.

The Grateful Dead have been playing their unique brand of improvisational, eclectic music going on 18 years now.

Though their records are modest sellers, and more or less ignored by radio and the “establishment” press, the Dead are consistently among the highest-grossing concert acts in the country.

What they do musically is improvisational, existential, and not always satisfactory; but since the beginning the Dead have been attended and experimented upon by forward-looking sound specialists, always seeking to improve the quality of their live sound.

Dan Healy has been mixing the Dead’s concerts since the band first took to the San Francisco clubs and ballrooms, and he says he’s never been bored.

To Healy, the Dead is “a vehicle that enables an aggregate of people to experiment with musical and technical ideas. It’s a workshop and a breadboard, as well as a dream and a treat. There’s no place in the world that I know of that would give me this much space to experiment and try new things and also to hear good music.”

The Dead’s own people have developed equipment and techniques to improve the state of the sound reinforcement art, and they have invited others to use Grateful Dead gigs as live testing grounds.

“We live on the scary side of technology, probably more than we ought to,” guitarist Bob Weir concedes. But you don’t learn much from maintaining the status quo, and the Dead have always encouraged experimentation and sought new knowledge in many areas. 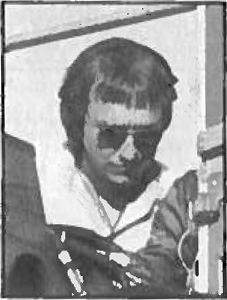 The first PA system Healy operated, at the Fillmore Auditorium in San Francisco, consisted of a 70-watt amp, two Altec 604s, and a two-input microphone mixer.

“And that was far out compared to what was there the week before,” he recalls. When Healy and his fellow soundmen started trying to put better systems together, they found that the hardware available was not very advanced.

“The first thing we did was go get tons of it, only to find that that was only a stopgap measure,” Healy remembers. “It was obvious that there was nothing you could get off the shelf that you could use. Furthermore, there were no answers to our questions in journals or texts; where the equipment ended, so did the literature and research. What we needed was past the point where R&D had taken sound equipment.” So they set out to find the answers for themselves.

Healy and the Grateful Dead became willing guinea pigs for John Meyer, then of McCune Sound; Ron Wickersham of Alembic; and others on the scene who were looking for ways to deliver music painlessly and efficiently at the often ridiculously high SPLs of the San Francisco sound and rock music in general.

“Those guys were long in the design and prototype area,” Healy explains, “and we were long in the criteria. We built a system and scrapped it, built another one and scrapped it. We never had a finished system, because by the time we’d get one near completion it was obsolete in our minds, and we already had a new one on the drawing boards.”

The concept of speaker synergy and phase coherency in particular was understood by the early Seventies, and several designers had come up with ways of implementing it. John Meyer and McCune Sound developed a three-way, tri-amped single-cabinet system with crossovers that reduced phase shift considerably. It was a significant improvement, but there was plenty of work yet to do.

While Meyer was in Switzerland studying every aspect of speaker design, acoustics and the electronics of sound, Healy and Alembic and the rest took off in other directions.

The Dead debuted a new system at San Francisco’s Cow Palace on March 23, 1974, in a concert dubbed “The Sound Test.” Bassist Phil Lesh calls it the “rocket gantry” and maintains that it was the best PA the Dead ever had.

“It was the ultimate derivation of cleanliness,” Healy explains. “No two things went through any one speaker. There was a separate system for the vocals and separate systems for each guitar, the piano, and the drums. You could get it amazingly loud, and it was staggeringly clean, cleaner than anything today. It still holds the record for harmonic and most especially intermodulation distortion.”

Healy calls this system’s theory of operation the “as above, so below theory. If you stack a bunch of speakers vertically and stand close to one, you hear the volume of that one speaker. If you move a little farther away, you hear two speakers; move away some more and you hear three. If you have a lot of them stacked up high, you can move quite a ways away and the volume stays the same.”

There was no mixing board in the house. Each musician controlled his own instrumental volume, because his speaker stack was its own PA system.

Guitarists Bob Weir and Jerry Garcia each had about 40 12-inch speakers in vertical columns, and bassist Lesh had a quadrophonic system. Vocals also were delivered to the band and the audience by the same speakers. Each singer had a pair of mikes, wired out of phase so that background sound arriving equally at both was canceled, while what was sung into one mike was passed on to the amplifier.

Healy recalls one unfortunate incident a year before the gantry system was officially unveiled, when some of these principles were tested at a concert in Stanford University’s basketball arena.

“We spent maybe $20,000 on amplifiers, crossovers, and stuff,” he recalls, “and we rebuilt a lot of Electro-Voice tweeters. We pink-noised the room from the booth and got it exactly flat. If you flatten a system from a hundred feet away, it’ll sound like a buzzsaw, and it did.

“We started the show, and in the first two seconds every single one of those brand new tweeters was smoked. We went through all those changes to put protection devices in, and they never worked, they blew long after the speakers were gone.”

There was no hope of replacing the 80 or more tweeters they’d blown, so Healy says they “opened up the tops of the crossovers, equalized a little bit and faked it.”

Healy points out philosophically that recovery from such catastrophes is “another thing that you learn after enough years. Recovery is your backup buddy.” He also notes that the years of experience make it much easier to estimate what will work and what won’t, so it’s easier to avoid disaster.

Read More
How To Build Your Own Plate Reverb: A Concise Step By Step Process

[This writer happened to have been in attendance at that Stanford concert. Although there were some rather long pauses while the equipment was worked on, the show itself was a good one, and a high time was had by all.]

It was economics that caused the “Sound Test” system to be dismantled. The gasoline crisis of the mid-Seventies made it unfeasible to truck tons of speakers, amplifiers and spares plus two complete stages which leapfrogged so that one could be set up before the PA arrived from the last gig.

“It began to eat us up after a while,” says Healy. “Remember that we were trying to take this across the country and interface with halls: set up the equipment, play a show for 20,000 people, tear it down, then show up the next day in another city and do it again for three weeks in a row, or a month, or six months.

“We were damn lucky,” he adds. “We got a tremendous amount of knowledge out of that system before it became such a burden that it started to distract from the music.”

All Posts
PrevPreviousVUE Audiotechnik Supports Arezzo Wave Love Festival In Milan ​
NextIn The Studio: A Video Introduction To The Proper Use Of De-EssersNext
Top Stories
Explore All Study Hall