An interesting look back at techniques for recording electronic instruments, circa 1970...

From the archives of the late, great Recording Engineer/Producer (RE/P) magazine, this feature offers an interesting look back at techniques for recording electronic instruments. The article dates back to September, 1970. (Volume 1, Number 1). The text is presented unaltered, along with all original graphics.

Everyone who listens to pop music has at some time heard that weird swishing effect swooping down through a drum solo or a vocal group making them sound rather like a long-distance short wave broadcast.

Most engineers will tell you that this is caused by phasing, yet most have only a vague idea of the mechanics involved and few still are able to produce a controlled effect.

Let’s take a quick look at what happens to produce this effect and then show some ways to accomplish it.

Phasing effects, like the sound of short wave broadcasts, are created by the addition of multiple signal paths, some of which are slightly delayed from the original. When the quantity of this delay causes the two signals to be phased 180 degrees from one another, cancellation occurs, causing a notch to be formed in the spectrum. This notch varies in depth and width, randomly (unless controlled) causing the swoosh as it travels up and down the spectrum.

In the case of audio phasing, a delay is introduced by speeding up or slowing down a tape machine in one of the information channels. The enables the two signals to be lined up electronically.

As the signals at the gaps of the playback heads begin to line up in relation to time, a point will be reached for each frequency when it is 180 degrees out of phase with the original signals, thus canceling them. The particular frequency depends on the playback head hap width, and also the degree of displacement of the two signals. The farther apart, the higher the notch frequency and the narrower the notch.

As the two signals approach 180 degrees delay the notch becomes wider and deeper. This is why fixed bandwidth tunable notch filters have been generally unacceptable for this use.

The block diagram of Fig. 1 shows a simple but effective way to produce a controllable phasing effect. These effects are usually added when combining to the finished product. 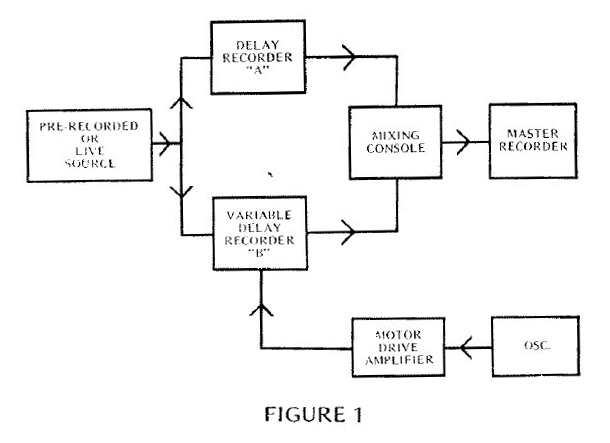 They may also be added during live recording, but since the adjustment is rather critical, most engineers prefer to wait until dub-down when they can give more attention to obtaining the desired effect.

The delay recorder “A” of Fig. 1 may be eliminated if the source recorder is equipped with “sel-sync” operation and you have an unused track available. Simply re-record the track or a mix of the tracks you wish to phase on the available track. Then place this track in “sync” position (playback from record head) and connect as shown in Fig. 2.

By speeding or slowing the delay recorder, the track can be positioned so that it phases with the original tracks. Since the amount of delay necessary to produce the desired phase shift is very small, close speed regulation is essential. 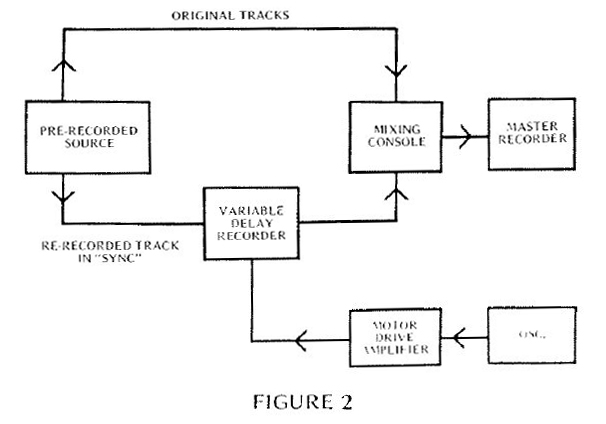 Control of oscillator frequency must be smooth and precise. It should be accomplished in such a way that fractions of a cycle may be adjusted. One way to do this is to use a vernier knob on a stable oscillator. 360 degree rotation of this knob should change the frequency one of two cycles at the most. This will enable you to accurately align the two signals for the proper effect. Many kit type oscillators can be adapted to this use.

Some type of frequency meter will be very helpful (but not absolutely necessary) in adjusting the frequency of the oscillator.

The methods suggested here are not the only ones that can be used, but are among the simple to implement. Some very complicated lash-ups can be used, but will not produce any better effects while being much harder to adjust.  Remember, the simpler you can keep any hookup, the easier it is for you to control.

(Go to next page for sidebar)