This article, from the archives of the late, great Recording Engineer/Producer (RE/P) magazine, provides an in-depth look at a new concert sound loudspeaker system unveiled in 1983 by leading touring company Electrotec. The text is presented unaltered, along with the original graphics.

Roxy Music has not toured in the U.S. since the late Seventies. The band actually dissolved in 1979, and only came together again during early 1982 to produce Avalon; in April of this year, the group was on the road to promote that album, as well as the recently released, live four-song “mini LP,” The High Road.

Twenty-six shows were scheduled over a period of 30 days, in various venues around the country ranging in size from 6,000- to I6,000-seat capacity. According to Roxy Music’s production manager, Chris Adamson, those 26 shows were very important to the group as it attempted to re-acquaint concert-going audiences with its music.

Regarding the group’s choice of sound companies, Adamson says, “It was basically a mutual decision made at management level. Robin Fox, our house engineer, felt that the new Electrotec system would be a good vehicle with which to present the group’s new material, and we were particularly interested in finding a company which could offer a package deal on sound and lighting.” 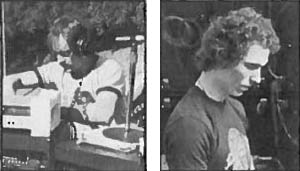 As Robin Fox recalls, “At rehearsals, I used four pairs of the new speakers in the main room at Studio Instrument Rentals [Hollywood], and I was favorably impressed with them indoors. This tour has a lot of indoor dates, but the outdoor shows are where we will really tell whether or not a system has what it takes. So far, I think we made a good choice.”

Lab-Q Loudspeaker System
The Electrotec Lab-Q is a three-way active/fourth-way passive, two-cabinet speaker system, capable of being stacked on the ground, or flown in the air with no additional special hardware. According to Pierre D’Astugues, Electrotec’s senior vice president, the new system is the result of more than three years of research and development.

“The low-end of the system was computer-designed and manually tuned so as to offer a response to below 40 Hz,” he says. “Our mid-cabinet is also computer-designed, and can achieve a true 60-degree coverage angle. Right now, the system is at a certain point in its evolution; this is not necessarily where we plan to stop with it. The basic cabinet structuring will be a constant, but as new transducer and electronics technologies hit the market we plan to adapt this system to fit the new developments.”

D’Astugues feels that the Lab-Q system is fully taking advantage of today’s available technology, but that a 10% to 15% improvement in the system will be evident by next year, due to engineering advances. “Feedback from engineers—[both] our own, and those employed by the accounts we service—is bringing about positive changes, and this system is exciting in that respect,” he remarks. “It is an ongoing thing. Crossover circuitry, transducer manufacturing technologies, and component alignment are all three areas where advances will occur.”

System Low-End
The Lab-Q low-end cabinet, of which 26 were used on the Roxy Music tour, houses a single 18-inch cone driver capable of handling 600 watts RMS. “The speaker is not currently available to the public,” explains D’Astugues. “It has been developed especially for us by JBL, and is a bit different from the similar, commercially available speaker.” When pressed for details, all he would offer by way of elaborating was that, “it’s more
expensive, I’ll tell you that much!”

The cabinet, which covers the sound spectrum up to 250 Hz, is a folded-horn design with center bracing, and currently is equipped with two round porthole vents (Figure 1).

System Mids and Highs
The second half of the loudspeaker system is a cabinet of identical dimensions designed to stack directly via locking corner mechanisms on top of the low-end cabinet, and thus create columns that tower approximately 8 feet above ground level. The mid/high cabinet contains two 12-inch JBL E120s loaded in a deep horn chamber; a new constant-directivity, bi-radial horn mounted on a JBL 2445 driver; and two specially modified JBL ultra-high frequency units that are passively crossed over (Figure 2). The system crossover point between the 12-inch speakers and the compression driver is 1.5 kHz.

The combined mid/high cabinet is rated at 400 watts RMS in the mid-range section, and 200 watts RMS on the top end. Coverage pattern of the horn-loaded 12-inch speaker section is matched to that of the bi-radial fiberglass horn, giving the cabinet an even 60 degrees of horizontal dispersion, Electrotec claims.

The cabinets arc constructed of a very dense plywood, manufactured with a patented process. “The wood is of considerable importance when putting together a speaker cabinet,” says D’Astugues. “Many people tend to ignore that part of the design process, but we have gone to great lengths to find the best material. The sound damping of the Lab-Q boxes is so good that nearly all of the energy goes into projecting the audio to the front of the cabinet, where it should be; walk around behind the box, out of the coverage pattern, and you will find very little SPL back there.”

According to D’Astugues, there has been no “magic” involved in the development of the Lab-Q system, just correct application of currently available speaker system technologies, a lot of trial and error, and much hard work.

System Electronics
At time of writing, Electrotec has been using Soundcraft consoles several years now, and its custom-designed version for slightly more than a year. The consoles have a distinctive custom metalwork outer housing finished in chrome (Figure 3). The module configurations are unique to the Electrotec boards; Soundcraft is building this console series especially for the PA company.

According to Soundcraft’s technical manager, Shane Morris, “These desks are similar to our Series Three in some ways, but they do not have any dual-concentric knobs … every function is laid out with a separate control. The desks are equipped with a front-access patch panel which utilizes Switchcraft mini-patch cables, and which is protected by a clear plastic cover on hinges.”

House and monitor consoles are nearly identical in appearance. The monitor console is equipped with 32 inputs, 16 outputs, and two additional effects sends; it offers four-way parametric EQ on all input channels and 16 outputs. The front-of-house console is equipped with 40 input channels, eight subgroups, and six effects sends.