From the April 1987 issue of RE/P magazine, John Meyer discusses the industry, techniques, and predictions for the future.

Editors note: From the archives of the late, great Recording Engineer/Producer (RE/P) magazine, this feature provides a look at what was modern sound reinforcement, circa April 1987. (Volume 18, Number 4).

On -stage monitors, when they were used, were handled by the house mix engineer, working with rudimentary equipment. Solid-state amplifiers were still a novelty, and active crossovers represented the cutting edge of experimental technologies.

Phase alignment of system electronics and loudspeaker arrays was widely regarded as insignificant. Cast in the role of pioneers, the men (and, very rarely, women) who were responsible for these systems battled heavy odds to put on a show. The loudspeaker systems – invariably “homebrew” affairs built by people with little or no formal training -were wildly inconsistent.

Distortion approaching 100% made it impossible to reproduce an intelligible vocal sound, and equalization was nearly useless. Component failures typically ran to 50% or higher each night.

Happily, the technology and practice of sound reinforcement have undergone explosive development during the past decade, and contemporary sound systems are much more sophisticated than their earlier counterparts.

The rise of manufactured loudspeaker systems has brought greatly enhanced consistency and reliability. Modular full-range cabinets now afford a high degree of dispersion control. Reliable, high power solid -state amplifiers and active equalizer /crossovers are the norm. Stage monitor mixing is a separate and complex task in itself, and concert sound engineers now work with consoles that are as sophisticated as the best recording and production desks.

As a result, the overall quality of concert sound has gradually improved. Moreover, amplified sound has achieved significant acceptance in legitimate theater, and even classical artists – once
the most vociferous critics of sound reinforcement – are taking advantage of high quality sound systems to reach larger audiences. 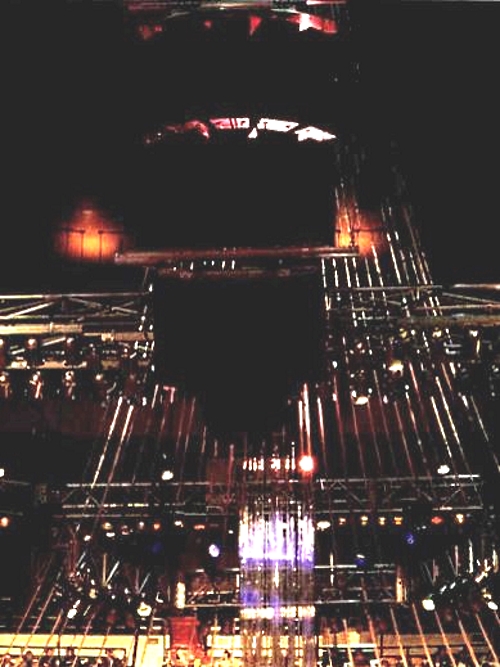 The developments of the past decade have placed at our disposal the means to deliver consistent high -quality sound show after show, with greater efficiency than ever before. We are approaching a new phase in our industry. The major changes that we now must make, in order to prepare for the technological developments of the next decade, are in the areas of attitude and practice.

This article will explore the implications of the current state of the art, and offer some predictions of coming refinements in the practice of professional live sound production.

The clear trend in reinforcement loudspeaker design today is toward the so-called “1- box,” full-range modular system. Because it offers the greatest flexibility in pattern control and ease of handling, this approach is unlikely to be supplanted in the near future.

As a result of refinements in transducer design, and the careful application of proven engineering principles, total system distortion can be reduced to less than 1 up to full power, with reasonably flat free-field frequency response and controlled dispersion.

With high resolution testing, we can identify and eliminate destructive narrow-band resonances. And most audio professionals now recognize the importance of paying close attention to overall system phase response.

As these developments become more widely accepted and implemented, the sonic differences among loudspeaker systems inevitably will diminish as the differences in image quality among color television receivers have become relatively subtle.