From the archives of the late, great Recording Engineer/Producer (RE/P) magazine comes a wealth of knowledge about reverb. (July/August 1979 issue)

Artificial reverberation, or echo as it is often called, is one of the most useful effects available to the recording engineer. Recently there has been an explosion of reverb devices available in the marketplace, and to compete for your dollars, they all must claim to be the best if not the ultimate machine of all time.

Actually, each has strong and weak points, so the purpose of this article will be to investigate the four basic types and see how they perform. The four types are: 1. Acoustic, 2. Plate, 3. Spring, and 4. Digital.

Each of these occasionally has been compared to natural reverb, so a look at some of the natural characteristics should be worthwhile.

Music is most often performed in a room large enough to accommodate musicians and an audience, so assume our space is 240,000 cubic feet or 100’ x 40’ x 60’. The recommended reverb time for such a space is 1.6 seconds at 500 Hz. Under average humidity conditions, the reverb time at 10,000 Hz, however, is likely to be no greater than .8 sec.

One important aspect of reverberation is the room modes or number of resonances per Hz the room exhibits, as this influences the coloration of the sound. For the reverb decay to be smooth, the room boundaries must be designed so that all resonances decay at the same rate.

Although this room exhibits the staggering number of ten thousand resonances per Hz in the critical mid-frequencies, only about three are necessary as far as human hearing is concerned. Another characteristic of this room is the density of reflections.

There are many thousands of reflections in the first second, although once again, only about 1,000 are necessary. This is shown in Figure 1, each line representing one reflection from a boundary surface; notice how they decrease in intensity as they increase in number.

Figure 1 shows another interesting aspect of natural reverberation; there are very few reflections in the early period — just enough to add some “air” around the direct sound but not enough to clutter it. Note that the reflections are random with respect to time and intensity and the time difference between reflections is usually not more than 20 milliseconds. 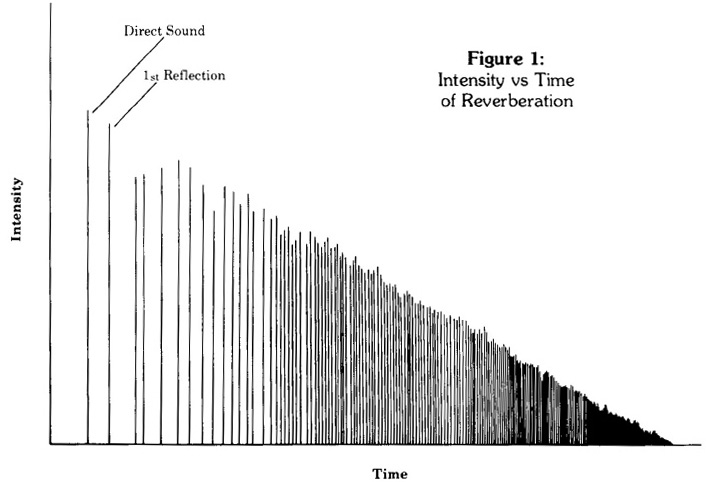 One more characteristic: each reflection may bounce around as many as 50 times before becoming inaudible, traveling an average distance of 38.7’.

In doing this the higher frequencies will suffer more loss than the lows which accounts for the shorter reverberation time at high frequencies.

Before anyone gets the impression that all this is a recommendation for live “in concert” recording — or giant echo chambers — it is not. But perhaps the preceding will serve as a base of reality from which we can assess the various artificial reverberation systems.

The acoustic chamber is the oldest type of artificial reverb; ideally, it is a room of at least 2,000 cubic feet whose walls are non- parallel to avoid flutter echoes and “hard” or reflective enough to have an absorption characteristic of .03 Sabines, easily obtainable with a few coats of verathane on plaster, the ratio of length, width, and height should not be integral multiples or the frequency response of the room will be unnecessarily irregular.

All of this should give a reverb time of about 3.5 seconds at 500 Hz. With an average temperature and humidity condition, the maximum reverb time at 10 kHz will be 1.25 seconds. For slightly longer times at 10 kHz, water vapor could be inserted.

The placement of transducers in an acoustic chamber is largely a matter of individual preference, although starting with the loudspeaker(s) in a corner and the microphones somewhere off center is a good place to begin.

An interesting variation of it is to use a dipole speaker somewhat off center with two PRP microphones located in the dead zones of the speaker.

A dipolar reproducer can be built by mounting most any speaker on a baffle board without enclosure so both sides of the speaker are open to the chamber. At a point 90° off axis from the cone the sound waves generated at the front and rear surfaces will meet.

Because these waves are approximately equal in amplitude but opposite in phase they will tend to acoustically cancel. At the places where this interaction occurs there will be little direct radiated sound.

This allows only indirect sound to reach the microphone and according to PRP principles, no coloration will be added due to comb effects of early reflections. Speaking of coloration, Figure 2 shows the zone of coloration of various reverb devices. Note the 2,000 cubic foot minimum of acoustic chambers. This fact, together with the extreme difficulty in isolating the chamber adequately, has influenced many studios to use one or more of the other reverb devices. 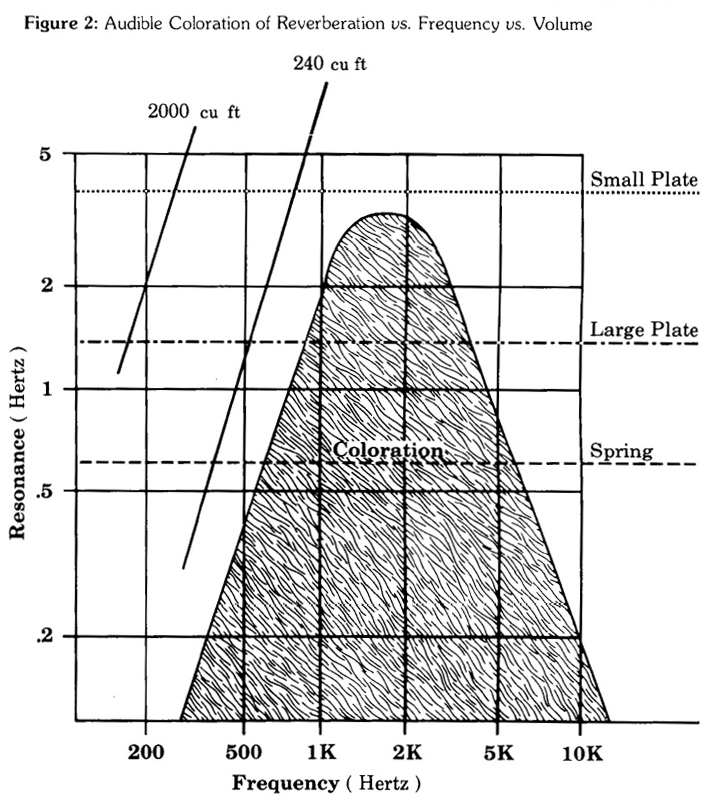 Probably the most popular type of artificial reverberation device currently being used to make “hit” records is the steel plate. Most likely this is due to some unique characteristics these devices have.

One of these is the long reverberation times at very high frequencies, over 2 seconds at 10 kHz, another is the frequency response as shown in Figure 3. These two qualities contribute to the crisp, bright decay for which plates are famous.

As has been shown, natural reverb cannot duplicate this due mostly to molecular absorption of the high frequencies by the air. Obviously, what is desired here is an effect; a “brighter” sound without having to turn up the equalizer. In other words, if the reverb that is added to the instrument has lots of high frequencies, it seems to give the impression that the direct sound is brighter.

One aspect of a steel plate that has been considered a drawback is the increase in reverb time at low frequencies. Although this occurs in natural reverb, it can be extreme in plates, which operate in the “bending mode.”

Although it can’t be seen, the sound ripples down the plate at a speed much less than that in air. This speed is directly proportional to the square root of the frequency, therefore low frequencies move much more slowly than high frequencies and so will take longer to decay.

When these devices first appeared, many engineers rolled off the low frequencies being sent to the plate. While this helps, it also reduces the “warmth” of the reverberant sound.

A better way is to increase tension on the plate and select clamping material which has exactly the right flow resistance to produce a flat reverberation characteristic.

Torsional vibration of the spring produces reverberation, but there is a finite delay as the sound travels up and down the spring, so the early part of the reverb is a series of short evenly spaced reflections. Excited by a short percussive type sound, an audible flutter echo is heard.

A number of ingenious solutions have been found to this problem such as multiple springs, deforming, etching, etc., to produce a high degree of diffusion. A well-designed spring reverberator, although not inexpensive, can sound more like natural reverb than any other artificial device, except for the moderately high degree of coloration inherent in these devices.

At the time of original publication, Jim Cunningham had been technical director of United Western Studios in Hollywood, California, for the previous three years. For six years before that he had been with the Sound Market in Chicago. While in Chicago he did extensive research into the acoustic properties of echo. This research eventually lead him to design the Ecoplate reverberation device which had been recently introduced to the recording community.
All Posts
PrevPreviousMatrix Sales Named New Renkus-Heinz Distributor In Denmark
NextASG Adds George Haile As Director Of Strategic AccountsNext
Study Hall Top Stories
Explore All Study Hall