Ray Stevens is in the seventh decade of a remarkable career in music. He began as a songwriter in the 1950s and by the 1970s was selling millions of records as a recording and touring artist, with comedy-centric hits like “Gitarzan” and “The Streak” alongside non-comedic work such as the classic “Everything Is Beautiful.”

Stevens, whose television variety show is seen each week on PBS affiliates, also owns recording studios and video production facilities, and his most recent project may be his most ambitious yet: the 35,000-square-foot Ray Stevens CabaRay Showroom, a 700-seat venue that opened in Nashville in January. And true to form for Stevens, it sounds great, with a RoomMatch sound system from Bose Professional at its heart. 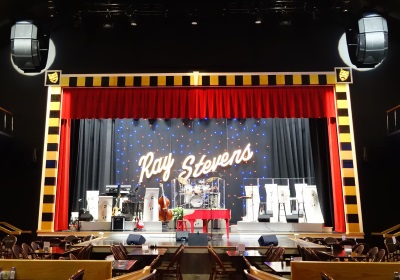 Harder-to-reach spots, such as under-balcony areas use a total of 12 RoomMatch Utility RMU208 loudspeakers as fills and delays, with four smaller 12-inch MB12 modular bass loudspeakers placed under the rear balcony seats. Two PowerMatch PM8500 amplifiers power the RMU208 delay speakers, one for left and right. The MB12’s are powered by two PowerMatch PM4500N networked amplifiers.

In addition, Bose FreeSpace DS 100F in-ceiling loudspeakers are used in the hallways, the foyer/box office area, and in the restrooms, powered by another PM8500N amp, to extend the live audio to those parts of the venue. Delays and other loudspeaker management tools are coordinated through a pair of Bose ControlSpace ESP-4120 engineered sound processors.

The system was designed by Steve Durr Designs, the audio and acoustical consultant on the project. “It’s an art form to marry a speaker with a room, and Bose RoomMatch has the ability to match the coverage pattern a room needs perfectly, without a lot of processing or electronics, because they can do it all through the loudspeaker waveguides,” he explains. “That alone makes RoomMatch the best place to start. You can hang a RoomMatch speaker on the wall and just plug it in, and it already sounds great.”

Durr, who has used RoomMatch on projects including the Country Music Association’s new world headquarters on Nashville’s Music Row, and Sony Music’s showcase performance space also in Nashville, notes that the RoomMatch system is innately tuned for musicality. “The RoomMatch crosses over at 500 Hz, well below the 1.1 to 1.5 kHz that most line arrays are set for, and that’s right in the middle of the vocal range,” he says. “That means RoomMatch has the clarity and intelligibility you need for music. You can hear and understand lyrics, so the emotion is always there.”

Durr says he took Stevens to hear the RoomMatch in the Sony Music venue and he was “just flabbergasted” at how good it sounds. “Ray knows how music is supposed to sound,” he says. “And so does Bose. That’s why it was such a great fit.”