Needed to deliver more than 110 dB SPL with maximum clarity

Named “America’s Best DJ” last year by DJ Times and PioneerDJ.com, Kaskade recently became the first solo electronic dance music artist in history to sell out the Staples Center in Los Angeles during a stop on his 2012 Freaks of Nature Tour.

Marking Kaskade’s first LA show since his two consecutive sold-out performances at the Palladium nearly two years ago, the Staples Center event was the most-hyped stop of the DJ’s 50-plus-city summer tour.

Needing to deliver more than 110 dB SPL with maximum clarity throughout the entire arena that normally serves as home to the Lakers, Clippers, Kings and Sparks, Rat Sound brought out its big guns with left and right arrays each comprised of 16 K1 enclosures tailed with three dV-DOSC cabinets for down fill.

A dozen V-DOSC per side, also featuring three dV-DOSC down fills, addressed the left and right sides of the audience, while two nine-enclosure KARA arrays very effectively covered the extreme upper left and right sections of the 220-degree seating.

For low frequency punch, a total of 26 SB28 double-18 subs were positioned across the face of the stage, while three ARCS horizontally arrayed directly in front of center stage delivered front fill.

A pair of 115XT HiQ coaxial wedges were also positioned just behind the DJ area for stage monitoring, and the entire system was powered and processed by seven LA-RAK touring racks, each loaded with three LA8 amplified controllers.

“The client wanted to ensure that the PA was absolutely top-notch for this gig, and with the K1 system, they got it,” says Rat Sound’s Manny Perez, who along with Manny Barajas and crew chief Jon Monson, flew the rig. “The coverage was fantastic. Even up in the nosebleed seats, the little KARA side arrays were absolutely rocking it.

“Kaskade’s DJ tech, who was in charge of ensuring that everything sounded good, was completely blown away when Milk (Mike Arnold, Rat Sound FOH/system engineer) took the K1 for a ride at sound check. Even Kaskade, himself, was overheard saying that it sounded badass. They totally loved it, and so did 20,000 fans.” 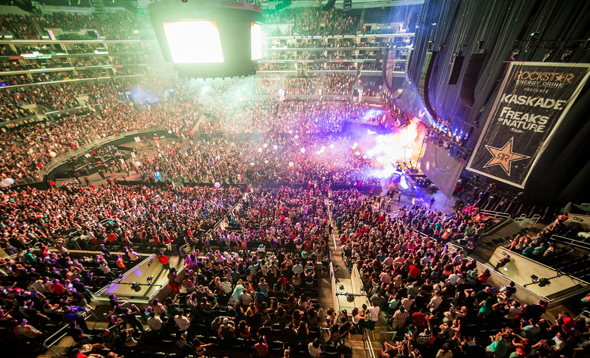