The division’s first product release is the Forest Audio F15 instrument preamplifier, a Class-A device with a unique feed-forward design that eliminates the use of circuit stabilizing negative feedback in the DI section, boosting sonic clarity.

According to Radial President Peter Janis, “Back in 1978, we started our first company and it was called Forest Electronics in homage to William DeForest, the inventor of the vacuum tube. (The new) Forest will include a variety of professional audio devices that will cater specifically to the professional musician, the engineer and producer.” 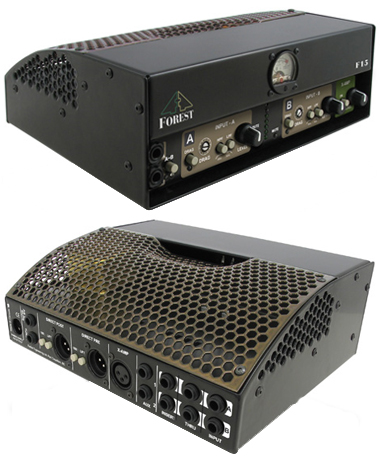 Two more Forest Audio products will be launched in the next 90 days, including the Q6 counter-coil EQ and the F11 Quad-Tube preamp.

Janis notes that Radial Engineering enjoyed a “record year” in 2008, with significant growth. Milestones include:

– The Radial JDX guitar amp DI and the Radial Phazer phase adjustment tool are now on tour with various bands, including AC/DC and Slayer.

– Primacoustic Recoil Stabilizers (nearfield monitor decouplers and stabilizing platforms) received a TEC Award nomination, and are used by noted recording professionals such as Al Schmitt, Elliot Scheiner, Daniel Lanois, Roger Nichols, and more. Special thanks to all of you for your willingness to try these and for allowing us to turn your studio world upside down!

Janis concludes, “In 2009, our goals are numerous. On the Primacoustic side, you will see a whole range of studio tools designed to allow the musician to create an effective working space in their home. With today’s incredible computing power, it is possible to record high quality tracks, produce great sounding demos and even bring your ‘homework’ to the big studio for final touches.

“On the Tonebone side, we have just started to ship the new Bones, a series of smaller yet very powerful versions of our popular tube distortion pedals designed to make music more fun and affordable.

“And with Radial, you will see some exciting new studio tools such as our new Lunchbox series, a new console switcher for festivals and we will start shipping the first of the Forest Audio brand of high-end audio devices.”

Click here (pdf) to get a preview of products.