It might seem pretty straightforward to put together a sound design for a national chain of entertainment venues.

After all, the term “chain” conjures up a cookie-cutter, assembly line process where one size first all. So get the first system figured out, put it in place, make some adjustments, and it’s good to go…right?

Not exactly, at least in the case of the live and distributed reinforcement systems developed for the growing stable of Toby Keith’s I Love This Bar & Grill establishments owned and operated by Boomtown Entertainment, based in Phoenix.

Carrying the name of one of the country superstar’s hit songs, all of the franchise locations offer live concerts several nights a week, similar fixtures and themes, and dining from lunch through the early morning hours each day, but from there, each takes on a life of it’s own.

Every facility (coming up on 20 and counting) is different in terms of layout, with about 70 percent built new as a “shell” that the design and construction team then configures and completes in a unique way, and the other 30 percent located in existing buildings that were previously a bar/restaurant.

Regardless, the centerpiece of every location is a massive “guitar bar” (literally a guitar-shaped bar with matching ceiling mosaic above) around which all flows, and each location also includes a private VIP room, green room and live performance stage, located where they best fit.

A perspective of a Toby Keith establishment in concert mode, and a look at a guitar bar.

The size and capacity varies as well, ranging from 800 up to 3,000. Performance stages are fronted by an open dance floor/audience area, with tables and chairs that can be moved around or removed if needed, the latter being the case when a national act is on the bill.

Fresh Look
Josh Maichele of the systems integration division of Parkway Electric in Holland, MI, serves as the A/V consultant to Boomtown Entertainment for Toby Keith’s I Love This Bar & Grill, also handling lighting, video, security, point of sale, and more in addition to audio. It’s a relationship extending back to the early days of the franchise, when he worked with a different systems company in performing design work for the initial locations.

The relationship was interrupted when Maichele departed to seek other ventures, eventually coming aboard with Parkway, but was rejoined when he was later contacted by Boomtown to support an initiative to upgrade the overall A/V effort while also developing a more standardized approach in terms of equipment choices and vendors.

“We took a fresh look at the sound design as a whole and started working toward a plan that would focus on the consistency and reliability of every system, while at the same time enhancing sonic performance and being as rider friendly as possible,” he explains. “Every single component was analyzed from a standpoint of reliability, and the ones coming up short were replaced. The goal is the lowest failure rate possible because it’s simply bad for business when a system fails in any way.” 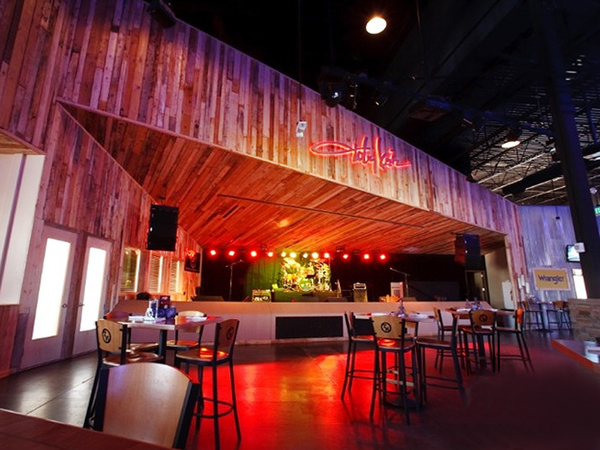 The stage and main loudspeaker array set at one of the locations.

It’s a process that’s still ongoing and probably will always be in play, but at the same time, key components have been implemented and are now significant to every system. Reliability has exponentially improved, while sound quality has also been enhanced to a national touring artist level.

A key directive from the client is that systems deliver intelligibility and consistency, with SPL as consistent as possible at the back of the room as at the stage. “Obviously, this is only attainable within reason, particularly due to the energy that’s going to be coming from the stage during a live performance,” he notes. “But our goal, which is achievable, is that not only the back of the room, but the VIP room and patio and so on get the same sonic signature at a commensurate level.”