Creative solutions to the daily challenges are readily available

Whether it’s a band using amplified and acoustic instruments, a bassist switching between electric and double bass, a drum kit right next to an acoustic piano, a particular sound that needs to be isolated in the face of loud ambient noise – or, well, you name it – selecting the right microphone (and deploying it in a certain way) can make a big difference in attaining the desired level and audio quality.

With that in mind, let’s take a survey of several live professionals about some of their “go to” mics and techniques when encountering acoustically difficult environments and/or in working with combinations of instruments.

Acoustic Piano
Preparing for a show with pianist/songwriter Mark Cohn, veteran FOH engineer Tom Dube announced that he could set up the piano mics in 60 seconds. With that, he reached inside the grand piano, positioned two DPA 4061 miniature omnidirectional condensers on the metal ribs of the piano’s harp with magnetic mounts, guided the cables, and plugged them into the stage snake.

Dube notes that he usually positions the mics in specific locations to maintain the proper phase relationship with the piano’s hammers. He then quickly adds a Barcus Berry XL4000 pickup to the soundboard under the lowest strings, running to the preamp.  (“Maybe the process takes 90 seconds,” he concedes.)

At the console, he generally adds some gentle limiting and applies a high-pass filter to the 4061s at about 180 Hz to reduce stage rumble. Additional equalization depends on the particular piano, consisting of a bit of midrange attenuation centered somewhere between 300 and 700 Hz, and perhaps a slight boost between 3 and 4 kHz as well as 8 and 10 kHz. The DPA mics are “remarkably consistent and useable,” he notes. 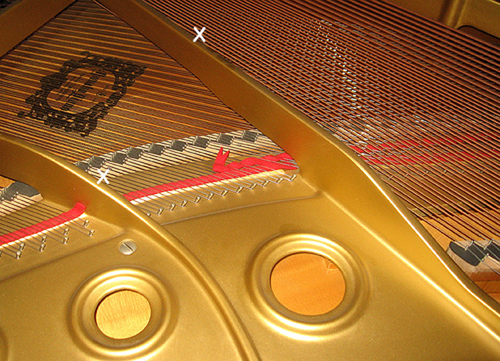 
The XL4000 pickup serves to reinforce low frequencies that are sacrificed for feedback suppression with the high-pass filtering. “I’ll dump a whole lot of 1 kHz and 2.5 kHz, as well as bump up a bit of 12 5 Hz to add the missing bottom,” Dube adds. Finally, he has the player hold some lower tones during sound check to determine the best phase relationship between the mics and pickup.

When talking with FOH engineer Nick Malgieri at the main stage of the 2013 Monterey Jazz Festival, he referred to the Shoepps MK4 and its “magical gain-before-feedback ratio” even before any EQ when used as piano overheads.

“I’m not sure if any other mic overheads would work as well on an acoustic piano on a live stage with a band,” he says. Because of higher stage levels and instrumentation, the MK4 output is typically blended with some combination of internally mounted DPA 4060s, AKG C414s, or an Applied Microphone Technology (AMT) M40 boundary mic attached to the sound board.

A DPA 4061 with convenient magnetic clip.

Acoustic Guitar
Getting an acoustic guitar to sound like it does unamplified, only louder, is a perennial challenge, especially when the guitar is doing more complex tasks than strumming chords in first position.

Solutions over the years have included a sound hole cover to seal the instrument’s acoustic chamber and lower the odds of feedback, as well as magnetic pickups under the strings, contact and under-saddle vibration-sensing pickups with outboard processing, and various small mics attached to the guitar either by themselves or in combination with under-saddle sensors.

At small venues where the audience is silent and the performer is still, simply placing a directional mic close to the instrument – avoiding close proximity to monitors and mains and adding judicious equalization – may do the trick.

Gary is a writer who has worked in pro audio for more than 25 years, holding marketing and management positions with several leading manufacturers.
All Posts
PrevPreviousNew Websites Launched For Grundorf And Grund Audio Design
NextChurch Sound: Why In-Ear Monitors Make A Lot Of Sense For Smaller ChurchesNext
Study Hall Top Stories
Explore All Study Hall