In the term “A/V” the “V” stands for “video” or “visual”—but it actually refers to anything that is displayed. Sure, it can be video, as well as a PowerPoint presentation, IMAG (Image Magnification) or even just information signage that tells attendees about the schedule of events at the event.

Today, the most popular method to display visual information for a large group of people is by using projectors and screens. Projectors come in many shapes and sizes, and they may be categorized into various groupings based on intended use, brightness, resolution, or cost.

To figure out which projector may be suitable for an intended use, it’s important to understand some basic terminology.

Resolution. This is the amount of data that the projector can display, usually quoted with two numbers separated by an X that represent the number of horizontal and vertical pixels in the display. The more pixels in a display the higher the resolution, and that means a more detailed picture.

Resolution can also be referred to by a name such as Super Video Graphics Array or SVGA. There are dozens of resolution standards in existence, ranging from the low CGA (320X200) to the high QSXGA (2560X2048). Here are a few of the common ones in A/V applications:

—SVGA (800×600) The lowest resolution commonly used in A/V. Not recommended for video or large display applications.

—WXGA (1280×800) The native resolution output for many widescreen laptops.

Brightness. The light output of a projector is measured in lumens with more lumens equaling a brighter image. Some like to categorize projectors based on lumens alone, but that method fails to take into account the ambient lighting in the room which affects the image, as well as other factors like throw distance and projected image size. 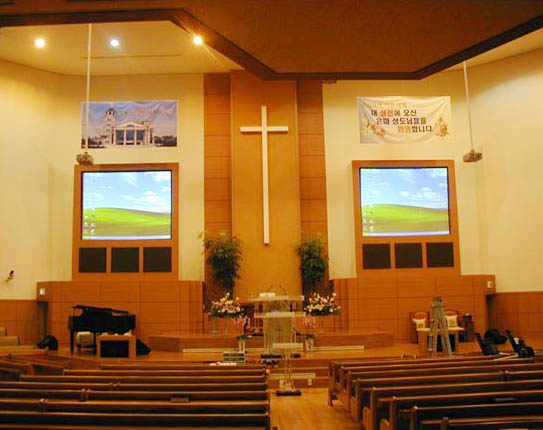 A projector might seem bright enough when it projects a smaller image, but could look dim when projecting a larger image. That’s because the available light output is now spread out over a larger area. The inverse square law that we know from audio is also in play with lighting. In lighting, as the distance from a light source is doubled, the perceived illumination decreases by 75 percent.

For A/V applications, projectors used in meeting rooms tend to be in the 2000-4500 lumen range with 6000-12000 lumen projectors commonly used on larger screens and in bigger rooms. For very large general sessions in ballrooms and theaters, projectors in the 15000-30000 lumen range are common.

It’s also popular to double stack projectors and combine the image on the screen for larger events. This not only gives a brighter picture than one from a single projector, but offers a built in backup if one projector were to die during the show.

Throw Distance & Image Size. As with any projected light beam, the farther you are away from the projection surface, the larger the beam size. Most projectors have an optimal range of placement based on their lens and this is stated as the throw ratio. In use, multiple the throw ratio times the width of the screen to find out the distance to locate the projector (measured from the front of the lens)

An additional category of projectors includes models made for “short throw” applications where the projector will be placed within a few feet of the screen.