Legendary sound engineer and businessman Michael Stahl passed away on Saturday, September 20, 2014, after succumbing to an extended illness. He was 68 years old.

Michael was raised around music from an early age growing up in the greater Washington DC area. He was fascinated as a child by sound and how every “noise” has its own unique and distinct collection of frequencies. “When I was growing up, I had no idea as to how these sounds could be changed or modified. I think my fascination was due, at least in part, to being surrounded by glorious classical music,” he said last year.

Micheal’s mother was the co-principal cellist of the National Symphony Orchestra in Washington, D.C., and many string quartet rehearsals were held in the living room of the Stahl home. What he did not realize at the time was that a string quartet was composed of superior musicians who were playing on extremely high-caliber instruments. It was experiences like these that gave Michael his foundations in both music and sound.

He got his start in production while performing in bands throughout high school, and college. After graduation he was employed briefly as a middle school history and math teacher. But the pull to use his musical and audio talents together lead him to opening a small recording studio in Northeastern Pennsylvania. It was from these modest beginnings that Michael launched a career in the professional audio business that would span more than four decades.

The studio Michael owned began to specialize in producing and recording advertising jingles for local businesses and also provided sound gear for live events on the side. When the early ‘70s gasoline crisis limited the ability of clients to travel to the studio, business dropped precipitously and Michael chose to close the studio. While this was not what he had planned, it set up the next important step in his career.

Michael was then hired by Clair Brothers Audio, located in nearby Lititz, PA, which was (and still is) the largest live sound company in the world. He worked for Clair for more than a dozen years, serving as one of the chief sound engineers on the company’s road staff. During that time he traveled across the U.S. and around the world providing the highest level of sound quality for some of the most demanding rock n’ roll acts of the day, including mega artists like Michael Jackson, Queen, Chicago and Kenny Rogers.

In the early 1980s, Michael was eager to get off the road and spend more time with his family. It was during this time that he accepted the position of general manager for Mountain Productions, one of the leading staging/production companies in the U.S. But it was sound, not staging, that was in his blood and not long after, he was back in the audio business, this time with Maryland Sound International (MSI).

At the time, Baltimore-based MSI was growing rapidly and was poised to open a new office on the West Coast. Michael was challenged to open and operate MSI’s West Coast Division and was appointed general manager of MSI, remaining there for several years.

He was next offered the position of general manager at ATK Audiotek. After serving nine years in that role, he and partners Scott Harmala and Mikael Stewart acquired ATK and he was named president. Stahl finished his successful career at ATK in the fall of 2012. 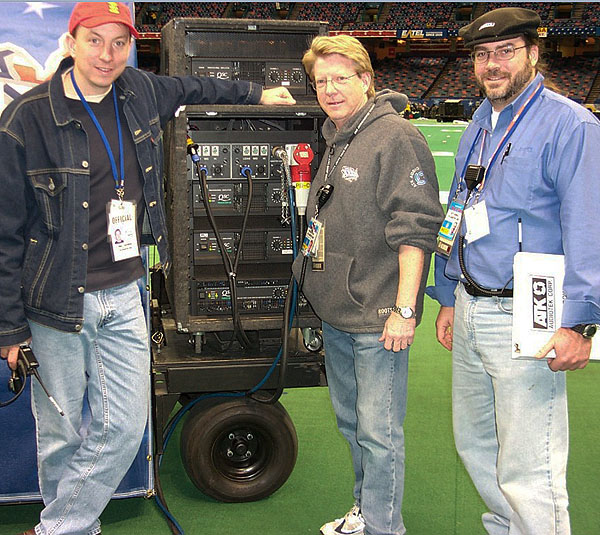 Mike Stahl (center) at work at the Super Bowl.

Under Michael’s tenure, ATK grew from a staff of six to currently having more than 70 full-time employees, and revenue grew 10-fold during that period, a testament to his drive and management expertise. ATK is recognized as one of the premiere audio companies in the U.S., counting The Super Bowl, Grammy Awards, Emmy Awards, Academy Awards, American Idol, The X Factor, The Voice and Dancing with the Stars among its many clients. After 21 years at the helm, as well as 20 previous years of live audio experience, he chose to retire and pursue both recreational and professional interests.

Michael had kept up his lifelong love of music that began as a child. He was an avid guitar player and collector and had amassed an impressive collection of vintage electric guitars. He was also a prolific writer and had been working on a series of articles that appear on ProSoundWeb outlining his experiences as a sound engineer and crew chief on the road in the 70s and 80s.

Michael is survived by his wife of 31 years, Judy, his adult children Michelle and Stephen, as well as his grandchildren, Samantha and Michelle. A memorial service will be held at Eden Memorial Park on Friday September 26, at 1 pm, 11500 Sepulveda Blvd., Mission Hills, CA 91345. The family has requested that donations be made to City of Hope in lieu of flowers.