Understanding frequency, wavelength, the speed of sound, loudness, propagation and much more

When the sound wave travels, it compresses air molecules together at one point. This is called the high pressure zone or positive component (+).

After the compression, an expansion of molecules occurs. This is the low pressure zone or negative component (-).

This process continues along the path of the sound wave until its energy becomes too weak to hear. The sound wave of a pure tone traveling through air would appear as a smooth, regular variation of pressure that could be drawn as a sine wave.

Frequency, Wavelength & Speed of Sound
The frequency of a sound wave indicates the rate of pressure variations or cycles. One cycle is a change from high pressure to low pressure and back to high pressure. 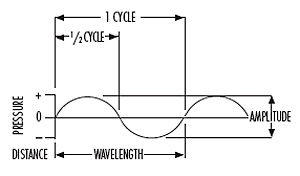 Schematic of a sound wave.

The wavelength of a sound wave of any frequency can be determined by these relationships:

Loudness
The fluctuation of air pressure created by sound is a change above and below normal atmospheric pressure. This is what the human ear responds to. The varying amount of pressure of the air molecules compressing and expanding is related to the apparent loudness at the human ear. The greater the pressure change, the louder the sound. 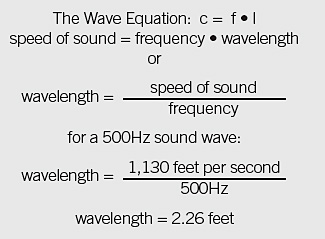 Under ideal conditions the human ear can sense a pressure change as small as 0.0002 microbars (1 microbar = 1/1,000,000 atmospheric pressure). The threshold of pain is about 200 microbars, one million times greater!

Sound Propagation
There are four basic ways in which sound can be altered by its environment as it travels or propagates: reflection, absorption, diffraction and refraction. 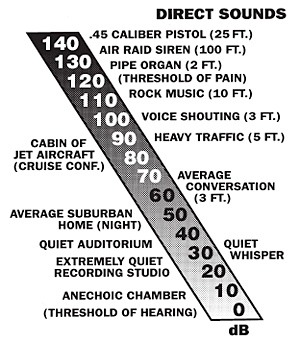 1. Reflection – A sound wave can be reflected by a surface or other object if the object is physically as large or larger than the wavelength of the sound. Because low frequency sounds have long wavelengths they can only be reflected by large objects.

Higher frequencies can be reflected by smaller objects and surfaces as well as large. The reflected sound will have a different frequency characteristic than the direct sound if all frequencies are not reflected equally. Reflection is also the source of echo, reverb, and standing waves:

Tim is a senior application engineer with Shure. He is noted for his teaching ability, presenting seminars about sound to a wide range of audiences and is the author of the Audio Systems Guide For Houses Of Worship.
All Posts
PrevPreviousIn The Studio: Using EQ Make-Up Gain (Video)
NextA Rig Of Their Own: Developing A Mobile Church SystemNext
Top Stories
Explore All Study Hall