A step-by-step primer for success from a veteran of more than 960 episodes of Late Night With Jimmy Fallon.

Day Of: Gain The Trust Of The House Crew
On most late night shows, the house crew will work with five bands a week. You’re just one act in a five-act show and your show is just one of the many shows they will see that season. In the first year of Late Night with Jimmy Fallon, there were 172 episodes total and only 37 of those episodes didn’t have musical acts.

The reason to have a good rapport with the house crew is the TV production world has a set structure as to how the daily schedule operates. The same dance happens on the studio floor every day — whether it’s your band or Beck with his band.

The day at the studio revolves around a production schedule and that schedule will include a slot for your band to setup and sound check. This is followed by a time for the director to take a look and convey any blocking, staging or lighting changes to the music stage manager. All of these mechanisms exist around the musical performance so they can fit your 3-4 minutes into the structure of an already well-oiled TV production.

Remember that you are a guest on their show.

The Camera Block Run-Through
After your band is setup and the blocking is locked, the lighting director will adjust the lights to further set the scene for your performance. Perhaps a touring set piece is integrated or use of video content is shown on the studio’s video wall. All of your road techs get to interface with the TV crew to make these hand-offs successful. As production elements, band risers and any floor lights get locked in, and the stage hands will start marking the floor so they can restore your gear to the exact spots during the change over from talk show to music performance.

The culmination of this time is a camera block run-through where hopefully you play the song and do any moves exactly the way you will for the taping or live performance that night.

The part of the show that your band will play in is rehearsed in its entirety with the music stage manger as your guide. They will sit or stand in the appointed spot where the host will be to give the intro for your performance. They will then wait for the cue from the director via headset to give the standby to all crew and band.

At this point, you should be at your starting marks and ready to spring into action. The director cues the intro, and the stage manager will read the intro copy and “toss” to the performance area. Then the magic starts.

Read More
Behind The Scenes: Mixing Monitors On A Late-Night TV Show

Following your song, the stage manager will enter and give an outro just as the host will during the taping. If all departments call the run through good and no tweaks are needed, then the musical act will be cleared from the set and the crew will go about methodically dismantling the music performance area so the next element of the show can be rehearsed.

Paul brings 20 highly credited years of technical experience to the details of audio, staging, video, and lighting arrangement in the areas of television broadcasts, arena performances, international music festivals, and special events production. In 2008, he was plucked out of John Legend’s “Evolver Tour” to audition (at SNL) for what was to become the Late Night with Jimmy Fallon television show. Over the course of six years (and 965-plus episodes), he worked in every music production element of the NBC nightly broadcast, in direct support of The Roots and in full collaboration with an enviable guest list of top acts which include Kanye West, Radiohead, Drake, Bruce Springsteen, Paul McCartney, Lauryn Hill, and The XX among many others. In 2013, Paul designed and built the monitor package for the famous Studio 6B set at 30 Rockefeller Plaza in New York City and saw the show through its memorable transition into The Tonight Show Starring Jimmy Fallon. Now the co-founder of Theory One Productions, he designs, creates, and implements the technical foundation for musical performances.
All Posts
Top Stories
Explore All Study Hall 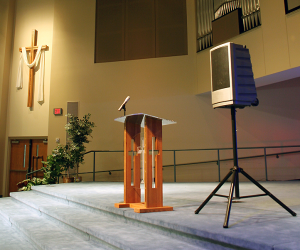