Presenting The Current View From Front Of House

House mix engineers from a wide variety of tours provide their views on digital consoles, as well as touring systems in general.

From the smallest van tours to the biggest worldwide touring attractions, digital consoles have established themselves for convenience, consistency and ease of workflow.

The modern sound system has neatly divided itself into two major products: loudspeakers and consoles.

Most analog consoles have the advantage these days of having been paid for, along with sonic quality and a familiar knob-per-function single-page control surface.

However, any production manager can tell you the advantages of digital consoles: footprint, size, weight, repeatability, consistency and all will mention that it reduces the FOH spec to a single product with a much shorter conversation about it.

Just as comparisons of digital to analog console prices never account for the laundry list of outboard equipment needed to complete the FOH equipment list, the time saved by not having to talk about all the outboard equipment has saved countless hours on the phone advancing shows.

The Holy Grail of digital desks is being able to walk into a gig and make someone else’s console your own by simply loading a file that fits on a USB memory stick, reducing the amount of equipment needed from one show to the next to a microphone kit, a pair of headphones and a laptop.

Whether you bring it with you or order it provided at each show or on each continent, digital consoles have finally reached the tipping point where their benefits outweigh the advantages of analog consoles for touring.

Let’s check out the view from the cockpit.

Dave Lawler (Diana Krall)
Dave Lawler has mixed Diana Krall for the last six years, relying on a Midas Heritage console for most of that time.

Prior to last summer’s run-out, he made the digital switch to a Soundcraft Vi6 digital console, which he calls “powerful, fun, easy and fast.” One of several favorite features he cites is the ability for more than one person to work on it at once, not all that common on mid-priced digital desks.

Lawler notes the console’s 22 inches of depth that saves a row of seat kills at his mix position compared to other makes of consoles, saving his artist hundreds of dollars every show. 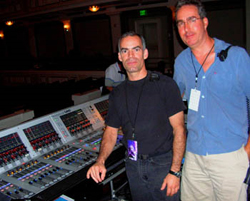 He mentions that the console’s size also allowed him to mix from a private box at the Hollywood Bowl, instead of the guest mix position further back. While the Vi4 is a foot shorter, its surface has eight fewer faders, and Lawler adds that having more faders available at once makes it easier and he’s glad he went with the larger console.

He also points out that he pairs stereo channels vertically, with the second channel on the second layer, allowing him to get most of his mix on the first layer’s 32 input faders. Another favorite feature is the ability to “gang” any number of channels and perform actions on all of them simultaneously.

He also uses a TC Electronic M6000 four-engine digital reverb, whose ICON remote control gives him five dedicated faders, besides those on the console. He also points out that they do a number of fly-ins and one-offs, where they go “commando” and just put this outboard equipment into a couple of 4U sleeves that fit into Pelican cases.

He mentions that the console’s onboard dynamics and effects are high enough quality for any application, with compressor, limiter and choice of gate or de-esser on every channel, plus the equivalent of eight Lexicon 960L reverbs inside. He comments that he didn’t expect to like it as much as he does, and notes that the screens are really bright and easy to use in sunlight.

As an accomplished system engineer as well, he incorporates a Meyer SIM3 and a pair of BSS Soundweb London BLU80 processors into the rack with the Vi6’s mix engine, feeding them AES digitally from the Vi6 and then coming out of the Londons using CobraNet, sending it into the Vi6’s digital tie lines going back to the stage, for a completely digital audio chain.

FOH connects with the Vi6 stage rack using redundant CAT5e, with a spare, for a total of three 80 meter cables, which are loomed together with 8 audio pairs for measurement microphones and intercom and a 12/5 AC run.

Lawler notes that a conscious decision was made to make their snake 80 meters, which is over 250 feet, instead of 100 meters, as it seemed like enough length for most venues, and it kept him from pressing the limits of CAT5 technology.