Josh Branch, owner of Firelight Media and Integration in Thomasville, GA wanted to make sure the audio system he selected to install at Praise Community Church in Lawrenceville, GA provided even coverage to the entire sanctuary, fit into the budget, and most of all provided long-lasting quality for the church.

“I’ve used the Flexsys system in the past before, but this was my first time really experiencing DVA. It was absolutely concert quality – a big reason we chose dBTechnologies was the quality, but the value for the money was incredible.”

When Praise Community Church first decided to update their facility, they made the commitment to seriously invest in their TV, video and audio systems. Where they used to have two loudspeakers mounted on stage, they now have two hangs each with 6 DVA K5 line array modules with Flexsys FM 12 stage monitors and four IG1Ts as front fills. 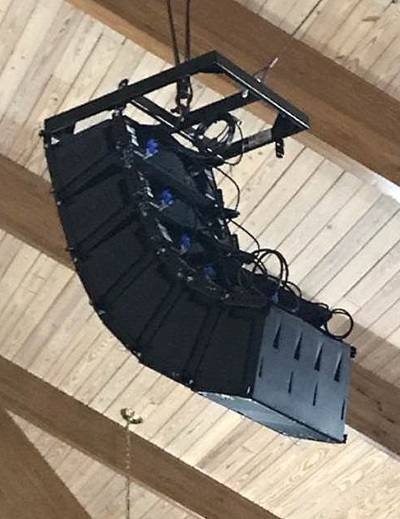 DVA K5 is well suited for both musical performances due to the internal reinforcements in each box, designed specifically to reduce vibration and unwanted resonance while delivering a clear acoustic response. DVA K5 also has a double rotary encoder which provides separate tuning for low frequency correction, as well as correction for high-angle midrange loss and air absorption compensation due to throw distance. The clarity and power of the system make it perfect for the vaulted wooden ceilings in Praise Community Church.

“Just those two flown arrays filled the whole 1200 seat auditorium and the large balcony perfectly, and the balance in the room is really good,” comments Branch.

Over 700 people fill the church during services and the clarity and intelligibility of the system was key, but Calvin Chacko, the media director at Praise Community Church, also emphasizes that the upgrades also help the space evolve with the church. “The old setup we had was 15 or 20 years old,” says Chacko, “and it was really intended for use with a choir. The dBTechnologies DVA system is much better suited for our contemporary worship services, and so far everything has been great with it.”

Branch adds, “”Firelight is a newly launched company and we’ve had several church installs this year alone. With more installs already lined up, we will definitely be considering dBTechnologies for our upcoming audio design projects.”

Open House At The Summit Church In Raleigh, NC To Showcase First d&b Soundscape Install In House Of Worship

A headset with a hypercardioid polar pattern and a podium mic with Active Vibration Isolation contribute to a renovation for an acoustically challenging space.