A decade later, the two companies continue to collaborate and pursue mutually beneficial opportunities in the pro audio sphere.

As a global integrator and rental company, ATK has provided audio services for events including the Super Bowl, The Grammys, the Republican and Democratic conventions, and many others. Over the course of the companies’ ten-year relationship, Powersoft has moved forward in amplifier technology and systems design, including power efficiency, software control, and networked audio among many other innovations.

The two companies began working together in 2009 after ATK’s VP of engineering, Scott Harmala finally tested an amplifier from Powersoft at the urging of one of his trusted colleagues: “I started testing it, and I just couldn’t believe what I was testing — it just seemed too good to be true,” Harmala recalls. “So I started considering the idea that maybe Powersoft should be in the running for the new amplifier purchase I was about to make. I started working through the process with Claudio Lastrucci of Powersoft, who was very responsive.” 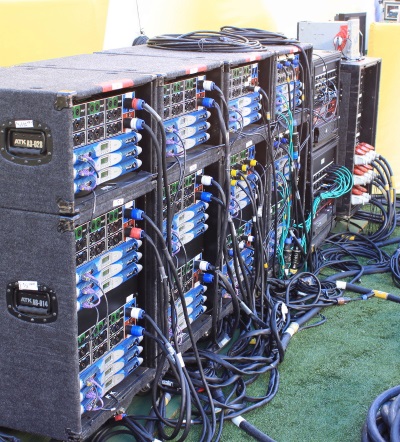 The timing was right, since Harmala had been pursuing a unified amplifier platform. “I was tired of having all these different amp sizes and configurations, different racks and systems. We had so much inflow and outflow of inventory on a daily basis, and it was logistically challenging having so many unique components. It is so much easier when you have fewer unique elements and a more unified approach. So I just started driving the idea in that direction and everybody internally seemed to be on board with it.”

ATK soon pulled the trigger on an order of 500 Powersoft K10 amplifiers as its first Powersoft order, which was at the time the amplifier manufacturer’s largest order to date. Now, ATK has 579 Powersoft K10s and 12 X4 DSP+ Dante amplifiers in its active inventory.

Originally, Harmala wanted the amps to be without DSP, because of ATK’s existing inventory and how systems were being used at the time. But after a year of having the K10s, and as their events became more sophisticated, Harmala begin populating them with DSP cards so they could build presets for all the speakers they were serving.

“We saw a great advantage to having the DSP handled internally and moving towards more of a distributed processing arrangement and I wanted Powersoft to be on board with this approach. They had Mario DiCola helped build the first iteration of Armonía, which I felt was a very positive step forward and one of the big reasons that I committed to what they were doing.”

The subsequently successful development of the Armonía software platform — which ATK was an early beta tester of — led to increased flexibility in amplifier deployments, as well as a deepened relationship between both companies. “Integrating DSP into the amplifiers was a massive change for our infrastructure and our way of doing things, but it allowed us so much more granularity and flexibility, while having seamless control of all our Powersoft amps.” 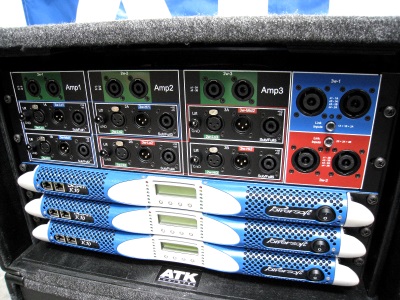 The collaboration between Powersoft and ATK led to further innovations, such as was when ATK required the ability to load presets onto Powersoft amp platforms: “ATK very often has many different requirements for its monitor, systems and monitor engineers,” comments Kurt Metzler, U.S. sales Director, Powersoft. “Each of these may require specific presets, so they needed a really fast and easy way to load these in on our X Series platform. Based on this feedback, we built a software platform that can load up 100 presets almost instantly using the USB plug on front of the interface. So their specific request and desired application drove us to create this solution.”

For the 2016 Super Bowl halftime performance, ATK brought in eight of their Mario DiCola designed subs — complete with M-Force technology — placing them in a 360-degree configuration around the stadium. Powersoft’s Kurt Metzler ended up getting a compliment on the system performance from a highly esteemed colleague: “He called me up out of the blue and said, ‘Hey Kurt, I was at the Super Bowl and I heard those Powersoft M-Force speakers. It was unreal what a difference it made. Nobody has ever heard a stadium with that kind of extension in the low end,’ and this guy had done countless stadiums and installs. The fact that ATK pulled this off was a great example of how they are always pushing the envelope on audio. We were proud to have our technology behind this effort of course.”

While features and functionality can often make set up and deployment more efficient, Harmala doesn’t mince words when it comes to his most important consideration in amplifier selection: “In my mind, reliability is always the top consideration in amplifier performance, and an area where Powersoft has consistently excelled.” Since working with Powersoft, ATK has experienced failure rates of less .5 percent of its inventory per year. “For ATK, reliability is mission critical — if something fails, that’s it,” adds Metzler. “And Powersoft will jump through any hoop we need to if there is any sort of problem — that’s the kind of relationship we have. If there is ever a problem, we will do whatever we have to do to make things right.”

When asked about what the future may hold between the two companies, Harmala becomes philosophical: “I think our industry has become quite a bit more sophisticated and the digital era has raised the bar in our industry, both in digital consoles and in digital distribution. It has become more technically challenging and it requires more education and understanding, but everybody in our industry now has more capabilities and more power to do more difficult things. Everybody is accustomed to working this way now, and there is no going back.”

“In terms of amplifiers, it is important to keep things efficient, small, light and powerful,” he continues. “Powersoft keeps on pushing the envelope in that direction, and I think they are well ahead of all the other manufacturers in power density and efficiency.” That is what caught my eye ten years ago, and I think they are an industry leader. There are others now that are trying to catch up, but Powersoft is still ahead. The rest is history. We’ve been using them ever since and having great success.

For its part, Powersoft has been privileged to work alongside ATK, according to Metzler. “ATK has been invaluable to us for beta testing new products and sharing candid feedback on our successes and failures. We depend on this open feedback and it has led to us going down different technological paths. There are many things coming that they will be a part of, and they will continue to help us shape new innovations and customer experiences.”