Isis, a concert venue with an accompanying upscale restaurant and bar located in Asheville, NC, recently opened with an installed sound reinforcement system that includes eight Powersoft power amplifiers, including Duecanali, K and M Series models, all outfitted with DSP and Ethernet connectivity.

The Isis Restaurant and Music Hall, located in a former cinema that originally opened in December 1937, books national as well as regional performers and can accommodate over 350 people.

Tom Brockenbrough, Jr., principal of Asheville-based company Summit Communications Systems, LLC, designed and installed the sound, lighting and video systems at the venue, which has also been comprehensively acoustically treated.

In addition to the Powersoft amps and EAW loudspeakers, Brockenbrough also supplied a 56 x 32 MIDAS PRO2C digital mixing console to handle both front of house and monitor duties. Audio and control data runs between the console and the Powersoft amplifiers over Ethernet.

Ken Blecher, executive vice president of Powersoft, formally introduced Brockenbrough to the amplifiers on a visit to Asheville during restoration and construction of the venue.

“When Ken took the time to visit us during our selection process, we were sold. He cracked the lid of a K Series and it was obvious that they had changed the game. I’d never seen a design like this before. Now with the amplifiers in place, I am happy to say that Ken and Powersoft delivered in every way. These are the most linear and transparent amplifiers I’ve ever had on a PA system, hands down.”

He continues, “I was pretty set on using EAW’s DSP, but as Ken demonstrated, I was able to load the EAW factory presets into Powersoft’s DSP and was presented with a GUI also unlike anything I’ve ever seen. The process of building up virtual racks and applying EQ groups across multiple amplifiers is the most intuitive and user-friendly interface that you could ask for. I only wish that I had access to this technology back when I was operating and tuning much larger systems.

“With an extremely savvy client, it was not only important that Summit provide world class products, but also the services to support this, and we are very grateful to Ken and his team at Powersoft for being right there with us every step of the way.”

Brockenbrough, who will oversee the system at the music hall for the initial schedule of performances, is using Powersoft’s Armonía Pro Audio Suite PC software to control the eight Powersoft amplifiers from the front of house position. “At front of house I’ve got two virtual racks and various EQ groups built in the Armonía software: a house rack with the amps for tops, subs and fills, and a monitor rack with those three amps.”

He continues, “I am really taking my time with tuning the system and making sure that my client and our community get the absolute very best that we offer. As we go through some different genres and styles of music, I am thoughtfully working on a place for the rig that best complements everything and everyone. But, it is also nice to know that we can very easily apply various presets if ultimately we need be able to change gears depending on the performance requirements.”

He has also configured presets within the software for a set-up of six two-way wedge mixes or four two-way wedge mixes plus a three-way mix, integrating the MicroWedge Sub. In addition, Brockenbrough has enabled Powersoft’s Active Damping Control in the software. “Where I was initially worried that the room would need more low-end, after applying damping control I’ve actually had to bring the subs back down!” he reports. “They just sit there and purr at you, no matter what you do. I have never heard anything like this. It’s awesome.” 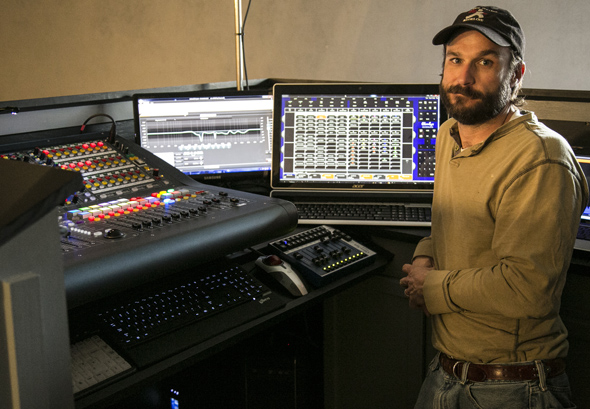