An absolutely vital but often overlooked aspect of system form and function.

Whether it’s a large festival line array rig or a single loudspeaker on a stick, all audio systems have one thing in common and that’s a need for power. Before starting to design, build, or use any power distribution equipment, the local laws and electric code should be consulted.

The place to start is the National Electrical Code (NEC), sponsored by the National Fire Protection Association (NFPA) and published every three years.

The purpose of the NEC is to safeguard people and property from electrical hazards caused by improper electrical wiring or unsafe practices. The actual code issued by NFPA is not a law, but rather an advisory document that outlines best/safe practices and offers warnings of known dangers.

Local municipalities can (and many do) legislate and adopt the current version of the NEC as law. Some may adopt the code it in its entirety, while others adopt parts of it and make changes (usually more stringent ones) to certain sections. Therefore, it’s important to check with a local government’s electrical inspectors and ascertain their specific code requirements. Once you’re up on the local codes it’s time to get the juice flowing to the gear.

Checking Things Over
The most basic way of getting power to equipment is plugging into a wall outlet at the venue. But this can have consequences if you don’t take the time to check out the outlets and breakers before the gig. The most common problem with wall outlets is that multiple outlets are allowed to be wired into a single breaker, and somebody else can plug into the same circuit as your gear and overload the circuit.

Before using any outlets in a venue, ask the venue staff if they’re relying on any of them during the event. Even plugging in a coffee pot to one of the circuits has the potential to wreak havoc with a system. Also check with the event planner to see if any other vendors, such as a photographer or videographer, will need power.

Next, find out what outlets in the venue share a breaker. This is easily accomplished by using a circuit breaker locator. These small test units consist of two parts, a sending unit (a.k.a., the Fox) and a detector unit (a.k.a., the Hound). The sending unit is simply plugged into an outlet, and the detector unit is moved over each breaker in the box unit it receives the signal from the sending unit. Using a circuit breaker locator is much more convenient than flipping breakers trying to locate an outlet because you won’t inadvertently turn off something important.

Once you’ve identified which outlets are on what circuits, label the outlets and the breaker box so it can be easily reset if a breaker is tripped later. After identifying the outlets that share a circuit, put a piece of gaff tape over any extra outlets to keep others from plugging into them. I find that a piece of white or yellow gaff with the words “Do Not Use” placed over the outlet keeps most from pulling off the tape and plugging in. (By the way, my circuit breaker locator is the CS61200 from Sperry Instruments and the sending unit also doubles as an outlet tester.) 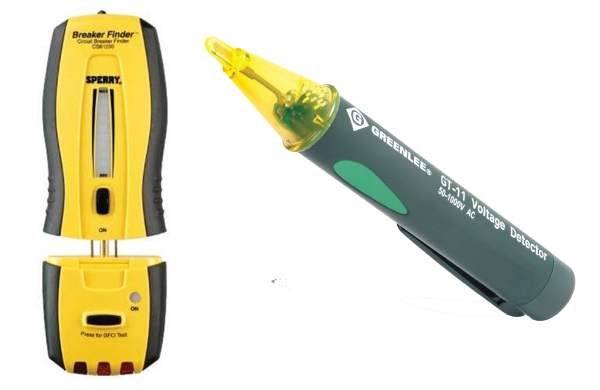 While locating breakers, also test to find out if the outlets are wired correctly. Most folks are familiar with the basic three light “cube” testers that plug into an outlet and can indicate different wiring problems via the three onboard lights. These testers can tell if an outlet is working and if it has a ground, but they cannot tell if an outlet is wired incorrectly with a “Reverse Polarity Bootleg Ground” (RPBG), which can be dangerous. Basically an outlet should have three connections: a slot wired to the “Hot” (black) leg, a longer slot for the “Neutral” (white) leg, and a rounded U-shaped hole for the “Ground” (green or bare wire). In some situations, a bootleg ground has occurred where the ground is tied into the neutral. In a reversed polarity bootleg ground, the outlet has been wired incorrectly and now the ground and hot conductors are joined together causing a shock hazard.

A standard cube tester cannot identify a reverse bootleg ground condition, but a simple non-contact voltage tester (a.k.a., Volt Tic or Proximity Tester) can easily reveal a problem. These small testers work by sensing and indicating the presence of voltage via a light or noise or vibration (or combination thereof) without having to be in the circuit like a meter. By placing the insulated tip of a non-contact voltage tester at the slots of an outlet, one can easily see if the neutral or ground conductors have power, which would indicate an improperly wired outlet that is not to be used. Only the hot conductor (small straight blade slot) on an outlet should read power with a non-contact proximity tester.

I’ve been carrying a Greenlee GT-11 tester for this purpose for years, but Sperry, Klein and others also make quality non-contact testers. They also come in handy to find out if extension cords have power and if circuits are live (before accidentally working with energized circuits).