Alpha Sound of Salem, Oregon recently completed the last phase of installation at Portland Center Stage Theatre (PCS), making it the first in town to have an entirely Yamaha/NEXO-based audio system for both its main auditorium and building-wide paging system.

A Yamaha QL5 digital audio console and two MTX5 matrix processors have been installed that allow incredible flexibility for designers and engineers, all running on a Dante digital audio network with a variety of Dante-enabled peripherals. 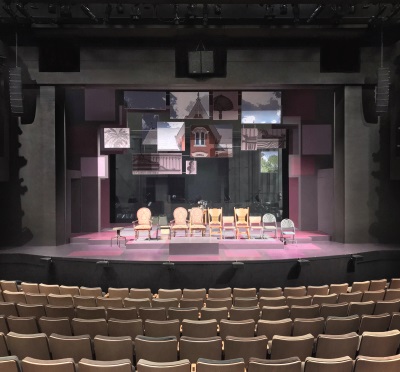 “With eight input sources requiring constant reassignments by various personnel to over forty zones on four different floor levels depending on daily activity throughout the building, we chose the MRX7 matrix processor with three additional MTX5 units and a Tio16 stage rack to be distributed and connected via Dante. Customized iPad control with ProVisionaire Touch allows instant and intuitive patching and parameter changes to the more than 400 control options.”

Resident sound designer and A/V supervisor Casi Pacilio worked closely with the Alpha team. Pacilio has been awarded by PATA and Drammy, and has worked both on and off Broadway productions, touring internationally as well as serving PCS for the past 13 seasons.

“Her in-depth knowledge and understanding of theater sound was a great asset during the installation process,” says Sheets. “It was a pleasure working with Casi and the theater, and we are very proud of this project.”

“The GEO M6 is deceptively loud and clear,” adds Sheets. “When we first installed the arrays, the guest engineer was worried about their small size and whether the rig would get loud enough for the rock musical they were doing. Upon hearing it for the first time, he could not stop smiling.”

Duane Sheets, president of Alpha Sound says that PCS was a fairly intense install, not so much because of the size but because of the high standard for audio quality at every point.

“We would not have considered anything other than Yamaha and NEXO equipment for this application; they are the only brands that we can trust to deliver.”

Pacilio says she appreciates Alpha Sound for being very responsive to the theater’s needs and requests through the years. “The NEXO and Yamaha systems are absolutely incredible, and we have had extremely positive feedback from guest engineers.”