At performance venues, we hardly give power a second thought, simply handing our tails or feeder to the house electrician to tie into the “company switch.”

Then we check the voltages at the distro end with a meter to make sure everything is connected properly, and that’s usually it – no more thinking about the power until it’s time to disconnect at the end of the gig.

The situation can be a bit different though when dealing with a generator. While sometimes there’s an electrician or generator technician on-site, more often we find ourselves having to spec, transport, connect to, operate, and monitor the generator ourselves.

A generator is a machine that converts rotating mechanical energy to electrical energy. A portable power generator consists of four main sections: engine, generating unit, governor controls and distribution. Engines in larger generators normally use diesel fuel, while gasoline is the common fuel for smaller units under 6,000 watts. 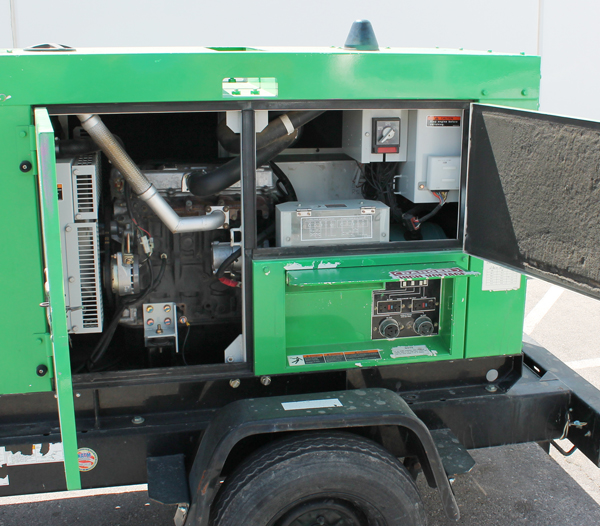 Power lugs to tie into at lower right, and a single-phase/three-phase switch at upper right. Also note the thick insulation on the door to block noise and vibrations. (click to enlarge)

The governor monitors the load on the generator and controls the speed of the engine to maintain the desired electrical output. The distribution section makes power available for use via connectors and lugs, and it also contains circuit breakers that offer protection from overloads.

There are a few types of generators, but for our purposes we need units made to power electrical equipment at a constant voltage and stable frequency while producing as little noise as possible. These units are generally known as “production,” “show,” “entertainment,” “quiet,” or “whisper” generators, and have excellent voltage regulation, usually within 1.5-percent tolerances or better.

Standard construction type generators are usually not as reliable as show types and are often quite unstable by as much as 25 percent. This may be fine for running a power saw on a construction site, but not very good for sensitive electronics like audio equipment. 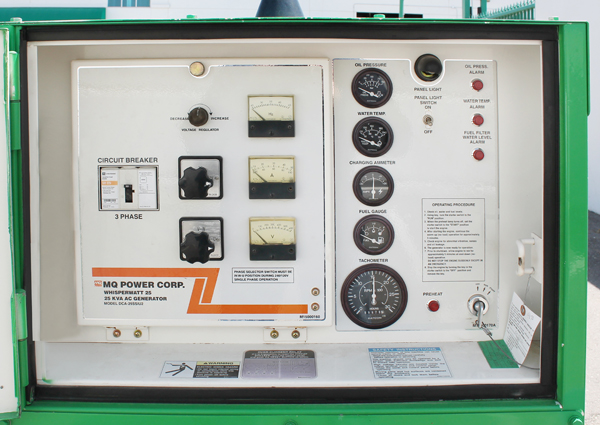 Control panel with voltage regulation controls on the left and gauges and lights for monitoring the genset on the right. (click to enlarge)

Production type generators are also a lot quieter than standard units, affording a greater choice in placement options. In addition to their better performance and lower noise footprint, they usually have larger fuel tanks in order to run longer between refueling. Most are mounted on trailers so they’re easy to tow/transport, and many trailers have a fuel cell built in for extended operating times.

Production type generators come in many sizes, with the load rating on the larger units usually stated in kVA (kilovolt-Amperes). It’s important to identify your specific power requirements and use a generator large enough that can handle your anticipated needs, as well as allow for any last minute additions.

I was going to detail the somewhat complicated math for calculating power requirements and conversions, but a very fast and accurate way to do it is online at websites such as www.onlineconversion.com.