The original stadium, opened in 1956, was a symbol of Poland’s post-war rebirth. It has held some of football’s most important and memorable matches, played by legends of the sport including Johan Cruyff, George Best and Cristiano Ronaldo. It has also hosted massive concerts by bands like U2, AC/DC, Iron Maiden and The Rolling Stones. In 1993 the stadium became the official home of the Polish national football team.

The rebuild of Śląski Stadium has been a long and sometimes difficult project. Started in 2009, the new 43,000 square meter roof proved the biggest hurdle and its partial collapse during construction lead to long delays and a re-design. Despite the problems and additional costs, the national importance of the venue ensured the project would succeed and it was finally completed in late 2017.

In addition to the new roof, the modernization has included new stands, lighting, video screens and sound systems. Other facilities include a restaurant, food vendors, and VIP boxes, and the stadium’s original speedway track has been replaced with a traditional track that allows it to host international athletic events.

An initial system design was put together by Dr. Piotr Kozłowski of Wrocław-based Acoustic Laboratory Pracownia Akustyczna, who subsequently approached Polish distributor Tommex to begin the process of equipment selection. Local company NOMA2 was brought in to carry out the detailed installation work under the guidance of its manager, Janusz Konopka.

Measurements determined the specification, which included a STIPA speech intelligibility of not less than 0.45 in an empty stadium. With a bandwidth of 60Hz to 16kHz, the system was required to deliver 105dB at the stands and 95dB on the playing field, each exceeding the estimated level of the fans by 10dB. 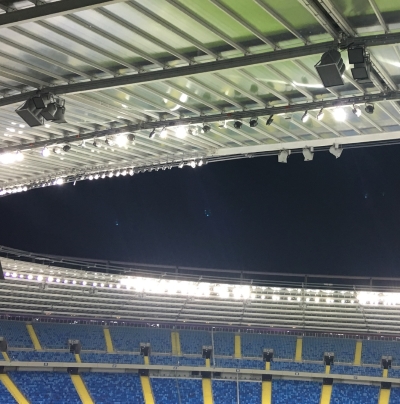 Meeting the design criteria required loudspeakers that would not only match or exceed the acoustic specification, but also handle the severe weather conditions. Śląski Stadium is an all-year venue so the sound system had to meet IP55 and, above all, the loudspeaker enclosures and fittings had to withstand the conditions of the severe Polish winter.

The system designed by Tommex is based around Dynacord electronics and Community loudspeakers. The main system for the spectator stands is divided into eight zones and utilizes one hundred nineteen Community R2-52Z three-way loudspeakers, supplemented by forty R6-BASSHORN. The raked seating of Śląski Stadium creates theatre-style balcony overhangs and the under-balcony seating and walkway areas are covered by sixty-one Community W2-2W8 loudspeakers. The playing field is covered by four three-way R2-694Z loudspeakers.

System management is located in the commentator room in the eastern stand. This is where a Yamaha CL1 digital mixer, Dynacord P64 matrix and Dante to MADI converters are located, MADI being the format for transmission of audio between the Yamaha CL1 and OB vans when providing signals for television or radio. Using the Dante protocol, the audio signal is distributed by two redundant optical fibre cables with a third optical fibre used for communication of the IRIS-Net network. System amplification includes forty two-channel Dynacord DSA 8209 amplifiers and forty-seven four-channel DSA 8410 amplifiers.

Read More
Counterintuitive? Cardioid Subwoofers Can Be A Bit Claustrophobic

A PC provides full control and system management via the IRIS-Net network. The system includes both wired and wireless microphone systems, with feedback eliminators. Zone microphones are additionally equipped with automatic regulators that adjust the signal level according to the background noise level and a Dynacord Promatrix microphone zone panel allows PA messages to be made by the stadium’s safety and security staff. CD, MP3, USB and SSD players are also provided.

All of the sound systems at Śląski Stadium are fully integrated with the audio warning system, which, if necessary, can take full priority and use the sound system for more efficient crowd control and evacuation of fans in the event of an emergency.

Marcin Zimny, the commercial director of Tommex, comments, “We are very pleased with the sound system at Śląski Stadium. With built-in reliability, it provides high intelligibility speech, great music quality and consistent coverage for this prominent international venue. It’s also a system of which we can be proud, being the largest sound system installed in any sports facility in Poland.”

Zimny adds, “It was a pleasure to work with Dr. Piotr Kozlowski and Pacownika Akustyczna and the installation company NOMA2, all high profile specialists in their fields.”

The Polish national football team will return to Śląski Stadium on March 27, 2018, to enjoy the modern infrastructure and facilities that now make it one of the most modern football venues in Europe.