Jurassic-themed event for over 35,000 people supported with largest deployment yet of Trinity arrays with CX800, Gravity 30, and Gravity 218 subwoofers.

Lost Lands Music Festival proved to be another historic event for both the Excision camp and PK Sound. With a Jurassic theme popularized by producer and festival-director Excision, it featured massive interactive dinosaurs and volcanic pyrotechnics. With over 35,000 people attending the event, Lost Lands once again made PK their exclusive large-format audio supplier.

The annual event held in Thornville, Ohio also brought many of the world’s most popular heavy-electronic performers and became the largest ever deployment of PK Sound featuring (104) PK Trinity large format line arrays with (96) PK CX800, (12) PK Gravity 30, and (16) Gravity 218. 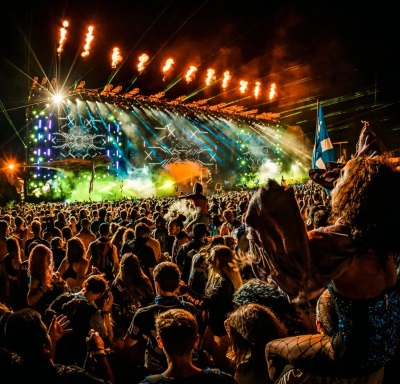 Additional Trinity out-fills to the left and right of the main stage provided extra coverage for VIP and ADA guests. Once flown, proprietary 3D Wavefront technology allowed engineers to robotically customize individual Trinity loudspeaker positions within the arrays to optimize coverage at each stage with crowd depths exceeding 1000 feet while avoiding sound clash between simultaneous performances.

Lost Lands also featured a secondary PK loadout for all 6 “Sound Camps” inside the festival for more intimate late-night performances. These stages used a total of (48) PK VX10 as low-hung arrays paired with (36) CX800 subs. Making use of the Trinity’s proprietary features was integral to the system engineer’s efforts to build a custom soundscape for the event.

Overseeing operations were front of house engineers Rory Stewart & Kyle Pace with system design led by Arlen Cormack. DiGiCo SD11 digital consoles along with PK’s Kontrol System Software allowed Cormack and his engineers to actuate Trinity’s horn-flares for ideal directionality while being flown from both stage rigging positions and truss towers for their field-delay positions.

The use of both Gravity 30 and Gravity 218 subwoofers allowed stacked placement, leading to an equally space-efficient footprint that allowed for the large amount of audio on just two stages.