PK Sound’s crew of engineers and technicians returned to the Do Lab’s Lightning in a Bottle Festival for Memorial Day 2018. An estimated 30,000 fans and contributors arrived at San Antonio Lake to play, dance, do yoga, learn, and cool off in in the water during the four-day camp out. Festival goers and experience creators enjoyed perfect weather, art, and a curated group of musical acts performing on PK Sound’s Trinity sound system. Music on the Lightning Stage both serenaded the crowd and roared throughout the weekend thanks to PK’s patented technology and their crew.

The Lightning Stage served as Lightning in a Bottle’s main stage where top acts like Anderson .Paak & The Free Nationals, Zhu, Griz, The Glitch Mob, Fever Ray, Sofi Tukker, Beats Antique, and Dirtwire performed. The audience danced from afternoon until last call, soaking in the soundwaves. 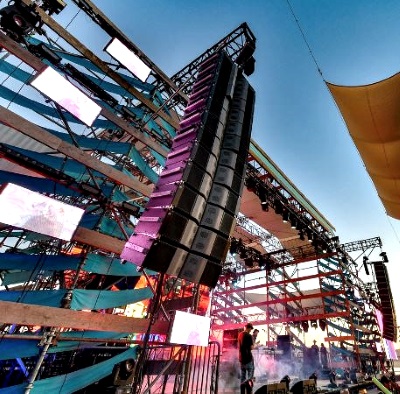 On stage loudspeakers included 3 PK VX10 compact arrays and 1 PK CX800 subwoofer per side as stage side fills for the bands and DJs, as well as 12 PK SW215 stage wedges and 2 PK Klarity 218 dual 18-inch subwoofers as drum fill.

The PA was plotted and configured through the use of EASE Focus software, which pinpoints the angles of the boxes and dispersion patterns. Front of house techs Rory Stewart and Ian Hicks manned the fort and accommodated three guest consoles with a total of 10 guest front of house technicians. “We strive to make it an easy and comfortable experience for any guest engineers on a PK rig, “comments Hicks.

Josh “CT” Sarraulte is on his first tour with The Glitch Mob as front of house audio and Lightning in a Bottle fell early in the tour schedule. “My only goal is to take what The Mob do and amplify it! For this gig it is about separation and clarity,” explains Sarraulte.

“I was happy with the amount of air I was able to push with the rig. Having this be the first big PA that we hit on this run it was nice that I didn’t immediately hit a boxes limitation,” he continues.

The following night Anderson .Paak and The Free Nationals engaged, entranced, and thrilled the audience with fun suave tunes for their closing set. Nevin Thomas – front of house for the band, joined the team in the sound booth to drive the system. While he’s working the live mix, Thomas’ main focus is getting a well-balanced mix that’s both simple and in-your-face. Through this approach he ensures the band matches the DJ tracks and its energy is what hits the audience first.

For his first time mixing on a PK Sound rig, Thomas states, “Amazing, nice and wide, clear sound everywhere. Feeling the subs and a nice top end made the night.” “I’m a fan of the tech that goes into the system as well – it added a huge stereo image,” he continued.

Coordinating the many moving parts and collaborating with top talent were the two themes of the weekend and the PK Sound team is always pleased to work with standout professionals.

“We had a pretty smooth year, considering how much gear came in and out. We always love working with the Do Lab/Lightning in a Bottle family and really enjoy supporting their vision,” says Arlen Cormack, VP of Production.