When measuring loudspeaker systems, the question of phase response often arises. I thought it might be informative to review setting the receive delay within a measurement system so that the displayed phase response is the “correct” one.

I have the word correct in quotes above because for a given magnitude response there are an infinite number of equally valid phase responses. This is due in part to what is called propagation delay. This is simply the time of flight of a signal through the air or any other medium.

It can also be caused by the latency of a DSP unit. An increase in propagation delay, or any frequency independent delay for that matter, increases the phase shift of a signal at the receiver location compared to when it originated. This is shown in Figure 1, below.

The same device was measured three different times with a different propagation delay for each measurement. This could have been due to different microphone location or different DSP latency. In this case, a different signal delay was applied to illustrate the point.

In each case the magnitude response is the same but the phase response is different. The reason for this can be understood by looking Figure 2. This shows the impulse response, in the time domain, of these same measurements. The progressively later arrival of each impulse (more propagation delay) causes more phase shift. 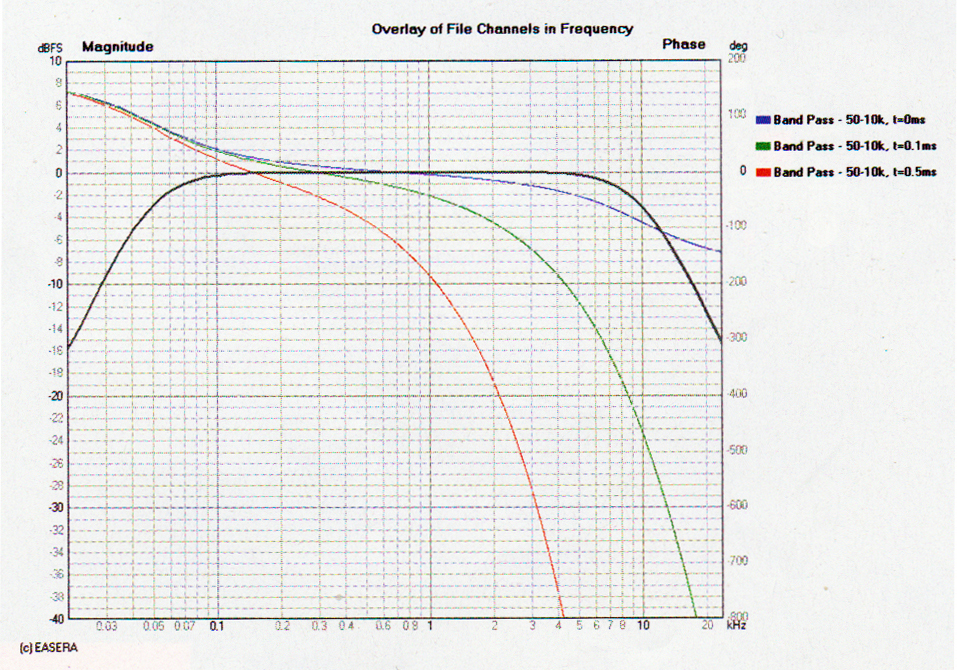 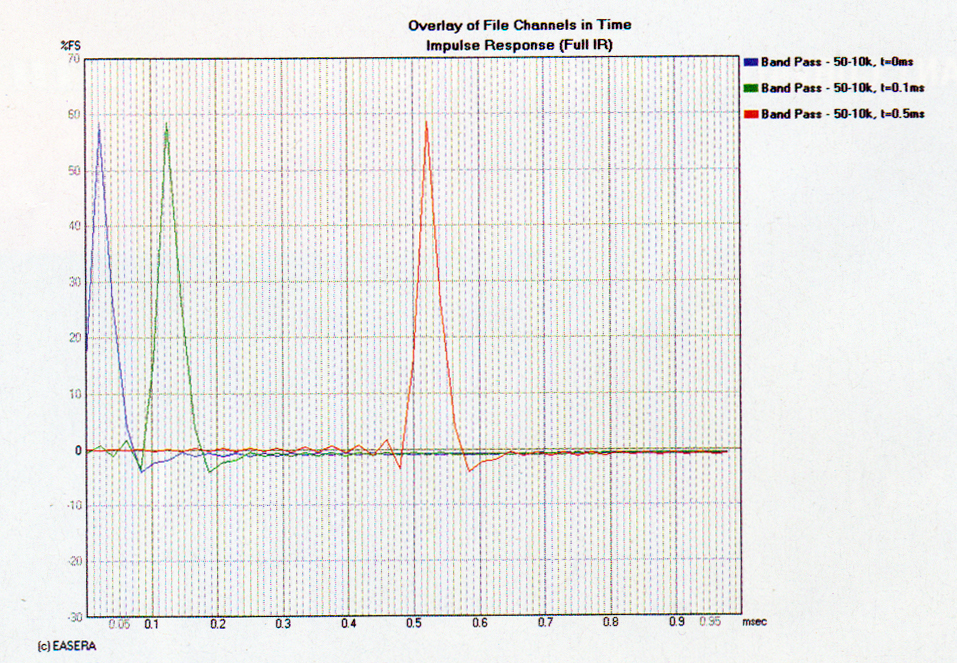 To see the inherent phase response of a DUT (device under test), we would like to be able to remove all of the propagation delay (red and green traces in Figure 1 & Figure 2) so that we are left with only the phase shift caused by the DUT itself (blue trace in Figure 1 & Figure 2). But exactly how much time compensation (receive delay) should be used? 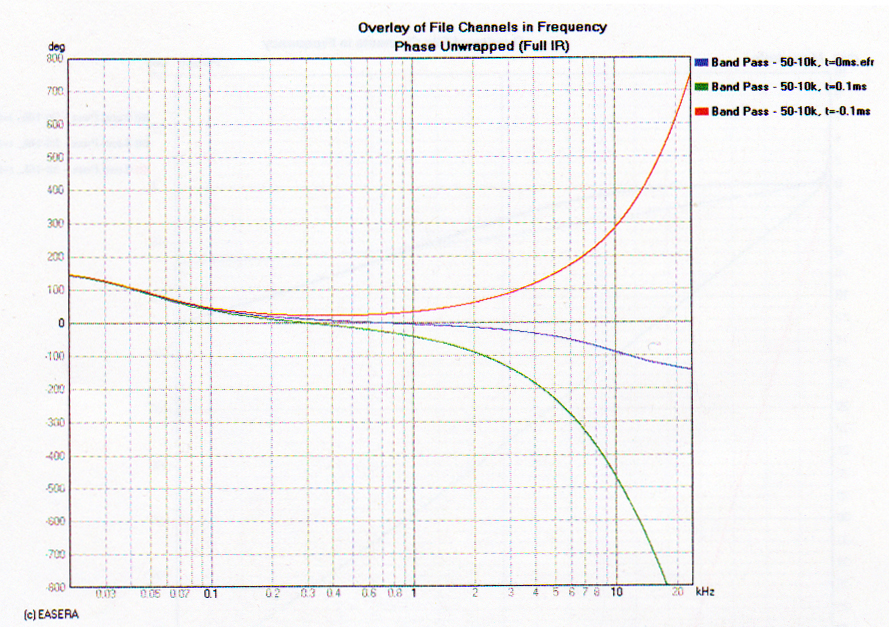 This latter condition indicates that energy came out of the DUT before it went into it. This is referred to as an acausal response meaning that the output was not caused by the input. This is shown in Figure 4 as the impulse arriving before time (t=O). This can’t happen in real time but can be made to appear as if it did with different analyzer settings or post processing of the measurement data. 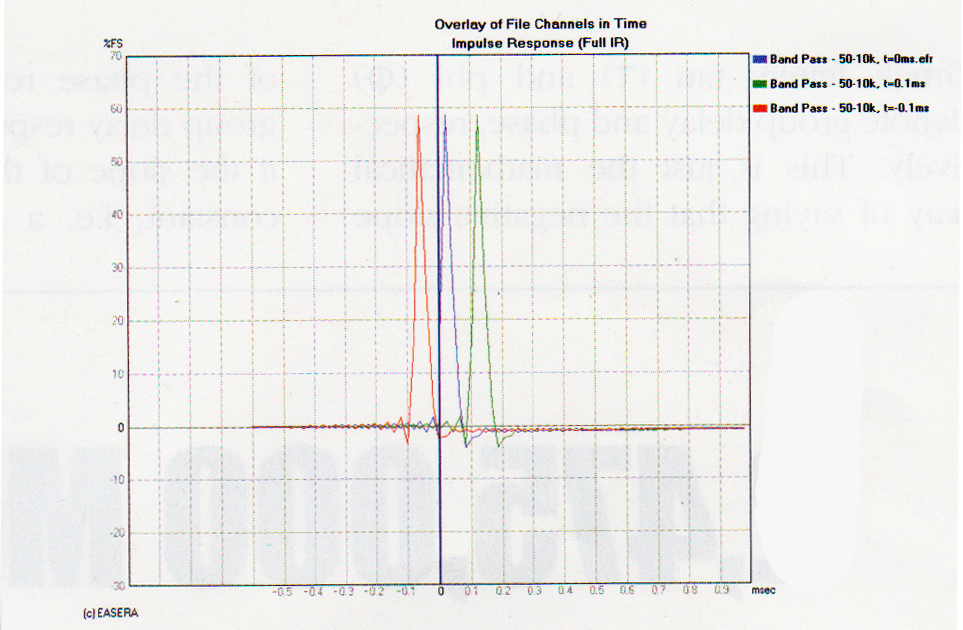 A loudspeaker can be modeled as a band pass filter. At low frequency the magnitude response will be very low in level and increasing with increasing frequency until it reaches its pass band level and flattens out.

At a higher frequency the magnitude response will begin to decrease with increasing frequency. This is shown in Figure 5. The phase response for this DUT is also shown. 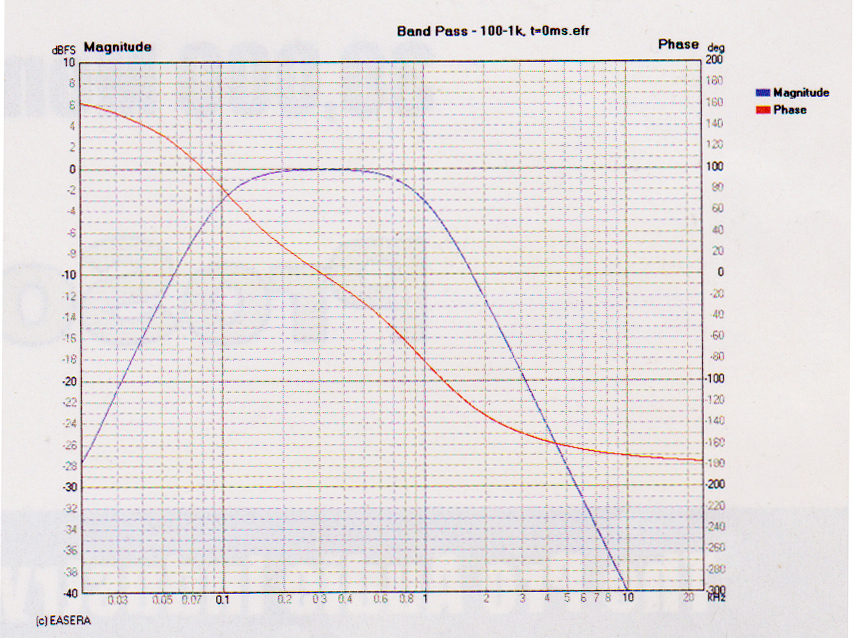 In this example, a 1 kHz corner frequency is selected as the high frequency limit to illustrate a concept detailed in a paper by Richard Heyser. (Determining the Acoustic Position for Proper Phase Response of Transducers, JAES, vol. 32, no. 1/2, pp. 23-25 (Jan/Feb 1984); also in Time Delay Spectrometry—An Anthology of the Works of Richard C. Heyser, pp. 182-183.)

This two-page paper is highly recommended reading. Its brevity greatly belies its substance. Heyser stated that, “If the value of time delay in the measuring medium is to be subtracted in the measurement process, as can be done for impulse, cross spectrum and TDS measurements, then the proper value of time delay has been subtracted, and the true acoustic position for the phase measurement has been obtained, when the plot of phase angle versus frequency approaches a flat horizontal line for frequencies well outside the pass band of the DUT.”

Notice also that in the higher frequency region of the pass band and just beyond (500 Hz – 2,000 Hz) the phase response is not flat. It is erroneous, albeit possible, to set a receive delay to yield a nearly horizontal phase response in this frequency region. This is a very common error and one that was formerly perpetrated by the author with some regularity.

Now that we know what to look for in the phase response, how do we achieve it? We can look at Figure 2 or Figure 4 and conclude that the correct receive delay to apply is some time between the initial perturbation of the impulse response from a magnitude of 0 (or out of the noise floor) and its maximum value. We could iteratively try each incremental data point (sample) of the IR and look at the phase to see if we had it right. This may become quite time consuming, however.

Alternatively, we can use group delay to help us determine the correct receive delay. Group delay is defined as the negative rate of change of phase with respect to frequency.

In real time the phase response always slopes down with increasing frequency. This means the slope is negative. If this actual slope is used as the group delay it implies that group delay is negative; that is the signal arrives at the mic/listener at some negative time (prior to when it left the loudspeaker).

Since this can’t happen in real time we negate the slope (multiply it by -1) of the phase response to get group delay. A negative slope times -1 will always yield a positive group delay (the signal arrives at the mic/listener at some time after it left the loudspeaker).

Read More
What It Really Means To Equalize The Room 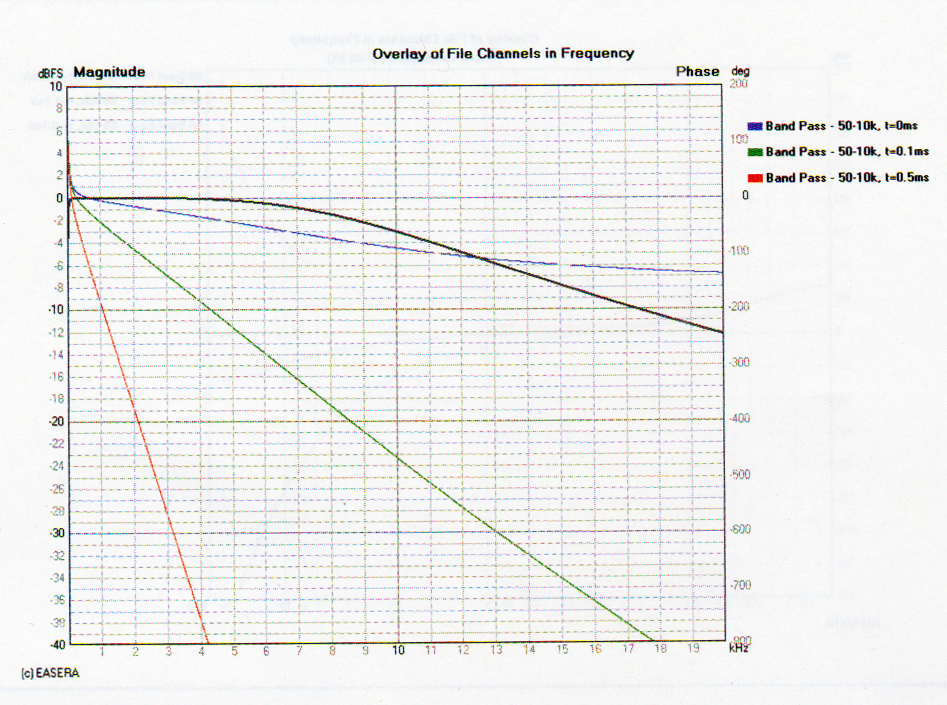 Figure 6—Magnitude (black) and phase response of the same device measured with different propagation delays (from Figure 1) shown on a linear frequency scale. 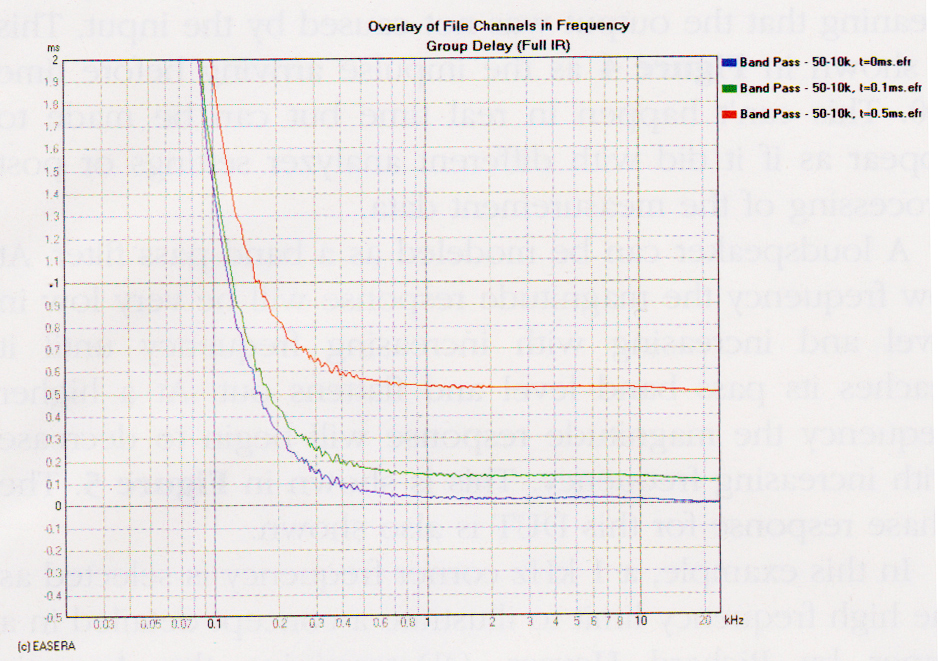 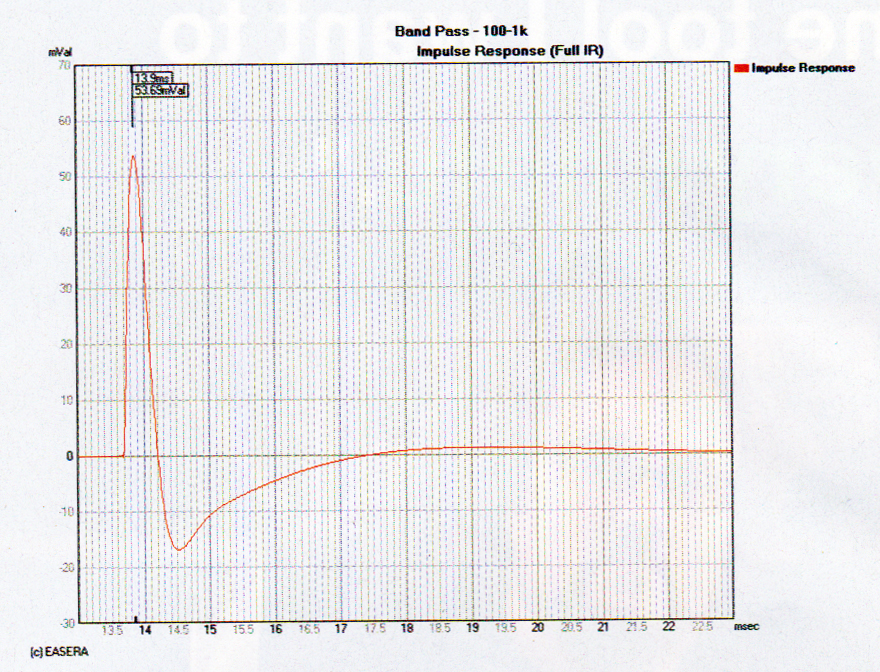 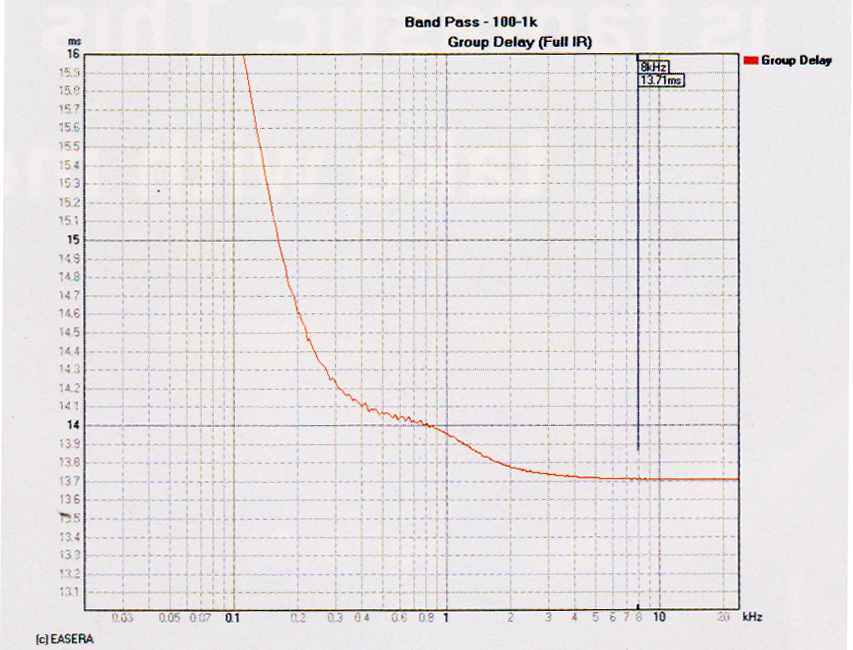 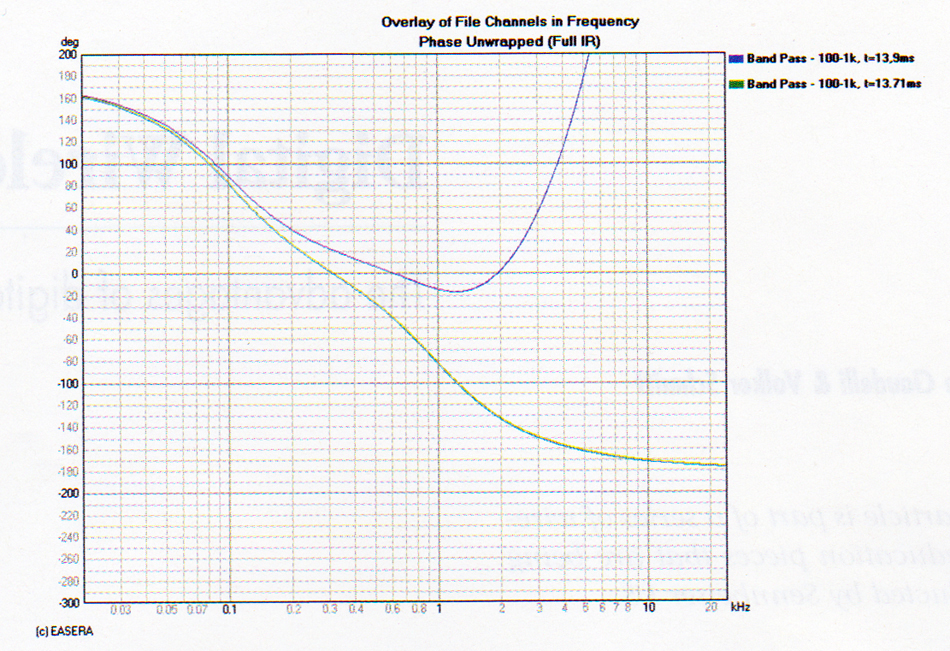 Comparing this to Figure 5 should be convincing. We have seen that the proper receive delay to be used for removing propagation delay is not the time corresponding to the maximum value (peak) of the IR (or ETC) but typically a bit earlier. We have also seen that this time can be located fairly accurately by looking at the group delay.

Hopefully this information will be useful to those of you making measurements to determine the correct acoustical position and phase response of a loudspeaker system.

Charlie Hughes has worked with leading manufacturers and currently heads up Excelsior Audio Design & Services, a consultation, design and measurement services company based near Charlotte, NC. He’s a member of the AES, ASA, CEA and NSCA.

Charlie Hughes has worked at Peavey Electronics and Altec Lansing, and currently heads up Excelsior Audio Design & Services, a consultation, design and measurement services company based near Charlotte, NC. As a loudspeaker design engineer, he's devised more than 60 products and has been issued five patents, and he's also helped to develop and implement a sophisticated multi-axis rotation mechanism to aid in the measurement of loudspeaker directivity. He’s also a member of the AES, ASA, CEA and NSCA.
All Posts
PrevPreviousMartin Audio MLA Deployed At Hollywood Casino
NextAuralex Introduces New Studio6 Bass TrapNext
Top Stories
Explore All Study Hall