Playing three-hour shows with 30-plus songs and set lists that change with each performance, Pearl Jam is well known for giving audiences their money’s worth. But on the band’s most recent stadium run, there was another group that received an even more tangible financial benefit: Seattle’s homeless population.

Pearl Jam’s pair of Seattle shows followed tour legs in South America and Europe this spring and summer, and served as the kickoff for a subsequent three-city, five-date tour of “Away Shows” in major sports venues: Washington-Grizzly Stadium at the University of Montana in Missoula, Wrigley Field in Chicago, and Boston’s Fenway Park. Rat Sound Systems, the band’s longtime touring reinforcement provider, carried a full complement of L-Acoustics loudspeakers for the sold-out shows. 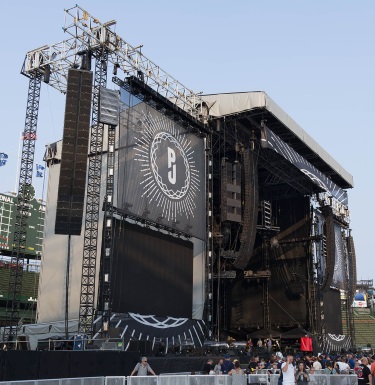 Rat Sound’s relationship with Pearl Jam goes back to the band’s debut album, Ten (1991), when it opened for one of Rat’s other longtime accounts, Red Hot Chili Peppers. Since then, the company has served as the group’s primary live production provider.

Greg Nelson has been the man in the front of house mixing chair for Pearl Jam since 2004, when the band toured with its first V-DOSC system.

In 2010, the band transitioned over to a K1 rig for the first time, which it has been using for tours ever since, including this recent run.

“K1 has a very pleasant, warm sound—even flat with no EQ modifications,” says Nelson, who mixed the shows on a DiGiCo SD5 console equipped with new 32-bit input cards. “I might make a few minor tweaks here and there, but the system makes it very comfortable for me to get the mix I want. L-Acoustics’ LA Network Manager software is part of that. It’s a well laid-out and easy-to-use tool that allows me to put the same sonic characteristics up in the nosebleed seats as we’re getting at front of house and down front.”

The standard show setup for the US outdoor stadium shows featured left and right main arrays of 16 K1 with six K2 down-fills flanked by two identical outfill arrays. Low-end punch was delivered by dual hangs of eight KS28 subs in cardioid mode, flown adjacent to the two main arrays, and bolstered by 40 ground-stacked KS28 arranged in ten cardioid stacks of four. Front-fill was achieved by a combination of double- and triple-stacked Kara enclosures positioned atop ground-stacked subs, plus four ARCS II in a horizontal array under each main K1 hang. Stage sidefills were comprised of left and right hangs of four K2, while audience delays consisted of four arrays of 12 K2.

“It was pretty much the same PA system for the whole tour,” Nelson notes. “The only differences were that the side hangs were smaller in Montana to get more vertical dispersion, because it was a football stadium, and there were no delay towers at Wrigley and Fenway—just carts of five or six K2 shooting up under the lower balconies.”

Although a major-league outdoor ballpark might strike some as a less-than-ideal setting for a high-fidelity concert experience, Nelson notes that Rat Sound’s system deftly handled the charge. “Big or small, every venue has its own unique challenges that need to be overcome, but I have been very happy with the flexibility that K1/K2 gives me. Again, tools like LA Network Manager and Soundvision make it far easier for me to get truly even coverage in any venue now, regardless of its size and geometry.”

Nelson points out that the Soundvision designs for each stadium were a collaborative effort between him and systems engineer Andrew Gilchrest. “I would do a rough design for a standard baseball stadium, including box count, position, sub count and placement, and front-fill coverage,” explains Nelson. “Then Andrew would take that and fine-tune it and do angles and trim for the various buildings. He also came up with the ground sub configuration.”

“Speaking of subs, the KS28 are so much more powerful… it’s just crazy. In arenas, I have considerably cut down on my sub count. They are so much deeper, and the 30-40Hz is much better represented than before.”

Nelson is also quick to compliment the L-Acoustics team. “I really appreciate how well L-Acoustics supports its users,” he says. “I have a slew of people that I can call on literally any time with questions or concerns. They are always very responsive and really care about the people who use their systems.”