WPM and CDD loudspeakers provide reinforcement for the 2020MY Ford Fleet Preview in Denver, Colorado.

OSA International recently furnished a sound system with Martin Audio WPM and CDD loudspeakers for the 2020MY Ford Fleet Preview in Denver, Colorado.

This year’s meeting went through a late re-design that incorporated a theatre-in-the-round style to better deliver the meeting theme and messaging. This arena staging and low ceilings presented a challenge for the audio team.

OSA senior staff engineer Paul Deuschle explains, “We were charged with providing an audio system for speech and video playback. The scenic design and staging divided the room into six slices of a pie within the circle around the stage. 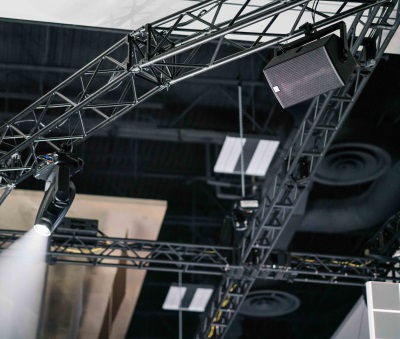 “The 30-foot ceilings were lower than a normal convention center and the client needed a large video screen in front of the audience, which limited the size of the system we could design and hang. Fortunately, this was the first show I remember where the producer agreed to move the screens down a little to fit in audio. We were given a four-foot window to fit the PA system above the screens.

“The system setup included three main line array clusters flown dead center. Each of these consisted of six Martin Audio WPM cabinets plus two CDD12 delay speakers mounted on a truss 45 feet into the audience, left and right of the video projectors along with one CDD12 each for the three areas with cars and trucks for the presenters.

Expanding the system rundown, Paul adds, “We also had three CDD8’s above the video screens pointing down to the stage for monitoring and three SX218 subs under the stage, one for each audience section for extra low end impact the client wanted for the opening video. We opted for the SX218’s because we needed something that could fit under the stage and deliver maximum power and impact.” 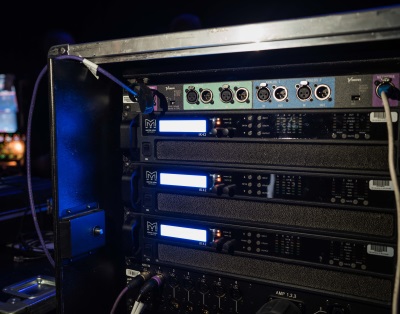 Asked about the results, Deuschle says, “The system worked out very well and the client was happy because they wanted a big sound so the audience could really feel the highly charged video soundtrack from a compact speaker that would fit above the screen, which is exactly what the WPM delivered.

“The executive producer loves the small box once we showed him how much audio quality and power WPM can deliver. The CDD’s also worked well with everything networked together via Dante which let me control every aspect of the system.”

Summing up, he concludes, “WPM is dynamic new-generation Martin Audio technology and very effective in terms of rigging flexibility, sound quality and uniform coverage. The speakers have the potential to provide effective solutions for a range of corporate applications.”