Have you ever heard a mix that was so naturally and transparently reinforced that you weren’t sure if a sound system was being used at all? A look at how we can translate ideas into techniques.

Have you ever heard a mix that was so naturally and transparently reinforced that you weren’t sure if a sound system was being used at all? A natural mix can be a hard target to hit. In this article, I’d like to discuss what I think a natural sounding mix means and how it can be achieved.

As a starting point, let’s consider what I mean by “natural.” In a very general sense, I associate the concept of a natural sound with clarity and tonal balance. In my mind, tonal balance means, for example, that the low end of the kick drum isn’t overly exaggerated, and there isn’t a large 8 kHz boost on the acoustic guitar making it sound artificially “sparkly.”

To put this in context, imagine a spectrum with an orchestra on one end and a very processed modern band such as Linkin Park on the other end. One has almost no reinforcement and the other is dripping with both reinforcement and processing, and they both sound incredible when done correctly.

It’s important to understand where your worship band’s sound falls on this spectrum. I recommend having a conversation with the worship leader to discuss what the goals are for the sound of the band. Additionally, listening to rehearsal recordings and reference recordings from other artists can be helpful in this dialogue.

Now let’s look at how we can translate ideas into techniques.

To me, a major aspect of a natural sound is crafting the vocal sound to be as clear and as intelligible as possible. A clear vocal is paramount to any type of reinforcement, and particularly so when mixing in houses of worship. People are there to hear the message and if that fails there is no point to anything else being correct.

There’s also a fine line between intelligibility and harshness. A vocal that’s too loud serves no one. If you think that the idea of someone screaming into your ear is “natural,” you may want to get your hearing tested. We want louder (that’s the point of the sound reinforcement system, right?) but there’s a pretty large gray area where “appropriate” lives. 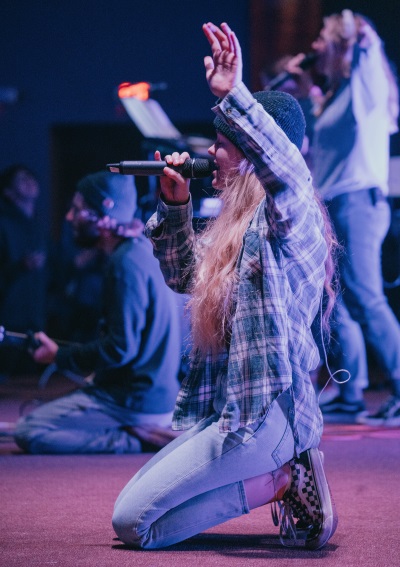 Every voice is different, which means that each one needs individualized attention. When I’m miking a pastor or working with a singer during sound check, I have a face-to-face conversation with them so that I can get to know the characteristics and the timbre of their voice. This gives me a palette with which to refer to while I’m mixing in order to gauge the accuracy of my system and my mix. As an added bonus, it creates a rapport with the individual.

Another suitable approach is to start with subtractive EQ. It’s generally better to start by cutting the frequencies we want less of, and then only resort to boosting the desired frequency ranges if still necessary. Lapel mics (“lavs”) should be placed just about mid-sternum to avoid shadows from chins and jaws while still giving fullness to the voice.

I’m occasionally guilty of cutting too much of the low-mid frequency range to compensate for a vocalist who’s “eating the microphone.” I’ve learned to be more vigilant about rectifying it, and of course, it helps to work with the vocalist on proper mic technique. After all, good sound begins at the source.

If feedback tends to be a problem in your sanctuary, slightly raising the location of the lav can help curb it. Headset mics should parallel the person’s jawline and leave somewhere between 3/4 of an inch to an inch between the capsule and the mouth. Keeping this space available for a person who’s very animated in facial expressions will help keep their cheeks from hitting the mic, thereby preventing unnecessary noise.

If you’ve never heard a band play acoustically, consider taking the time to go hear one (at least). A group of musicians who know how to play together and balance themselves without amplification are usually some of the best to work with. They can make our job 100 times easier. On the other hand, musicians who lack the ability to control their dynamics present the biggest mixing challenges.

In a worship context, emphasis on the rhythm section is important to assist people in keeping time (and vocals, of course). I think we’ve all borne witness to an assembly of people unable to clap in unison.

As we talk about music, this can get a little sketchy. Music means something different and sounds different to every single person. So, at least partially, this aspect is dependent on the musicians you’re reinforcing. Does it sound like the drummer is slamming the snare and barely tapping the kick drum? Is the mix thin or too bass heavy?

It can be easy to become overwhelmed with the technical aspects of audio. Sometimes it’s helpful to close our eyes, take a deep breath, and ask ourselves: “If I walked in right now, what would I think of the sound? Does it sound like a band is playing in front of me? Does it sound professional? Is this balanced? Can I hear everything that’s happening on the stage?”

Remember these questions and ask them periodically. I can’t tell you exactly what a natural-sounding band sounds like because it depends. There are so many questions. Perhaps this article is more of an inspiration to get you thinking critically. I can only give you my recipe and perhaps spark an idea.