On The Right Track

The last thing you need when you get some precious time off from the road is to come home and find a black bear in your refrigerator.

“This isn’t the first time, and probably won’t be the last,” says Jason Moore, having just cleaned up the foraging brute’s half-eaten mess in his garage, where the aforementioned fridge resides. “We know this guy. He huffs, puffs, and pounds the ground a bit every time we chase him out of here, but he won’t get truly mean unless you back him into a corner.”

Wildlife issues in suburbia notwithstanding, Moore’s home life is supported by his touring efforts, which for the last three years have placed him at front of house for Train, the renowned rockers from San Francisco.

As the maestro of the band’s live mix, he presides with a creative hand over songs from Bulletproof Picasso, the group’s seventh studio album (which also lent its name to the 2015 summer/fall tour), as well as other fan favorites such as “Save Me, San Francisco,” and “Drops of Jupiter.”

Not long ago, after restoring order to his home in Orlando following the bear invasion, Moore sat in his studio and gave consideration to his work and the technology that brings it to life every night. “Train is, first and foremost a rock band,” he begins. “These are real musicians. Guys who care about the music, write really good songs, create fabulous tones, and have high regards for their fans. They are definitely not in this just for the paycheck. 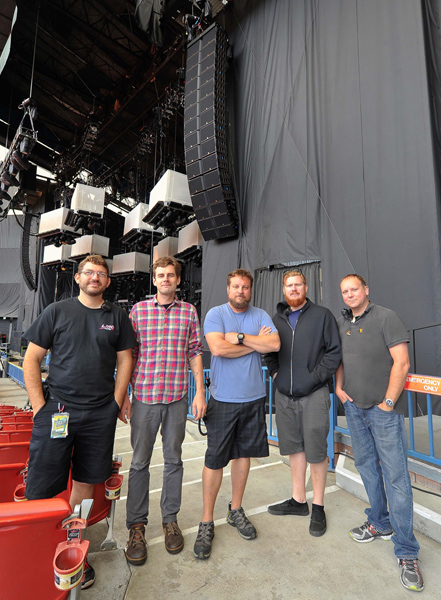 “A wide range of people love this band, including those in the corporate market, and that, if anything, poses one of our biggest challenges: The venues we play are as varied as the fans,” he continues. “Festivals, fairs, arenas, sheds, ballrooms, theatres, casinos, fly dates…We do ‘em all, and frequently back-to-back, so you have to know how to do this anywhere, and with the consistency everyone expects.”

Trying New Things
Joining Moore on the latest leg of the Bulletproof Picasso tour were monitor engineer Rob “LB” Greene, monitor tech Zach Larson, PA tech Michael Gazdziak, and system tech/crew chief Andrew Gilchrest. Show technology ranging from audio and video to lighting and then some was supplied by LMG. Traveling in six trucks and six buses, the show was big, substantial, and backed by a willingness to try new things in terms of the gear carried.

Out in the house, sound reinforcement was provided by left-right hangs of eight-over-eight K1 and K2 enclosures from L-Acoustics. Additional K1 and K2s were deployed as side hangs, while a half-dozen KARA cabinets saw duty as front fill on the downstage edge. 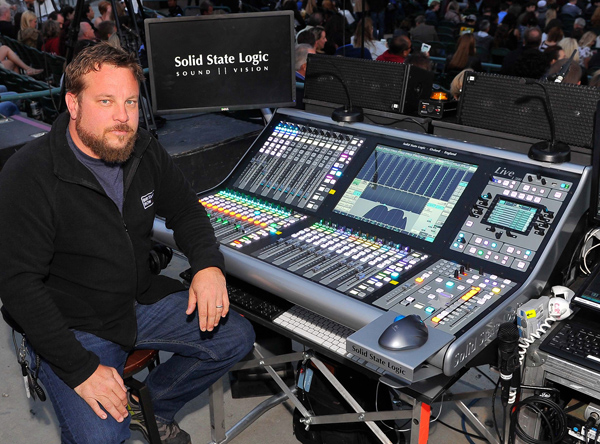 Front of house engineer Jason Moore with the SSL Live L500 he’s switched to for the tour.

After experimenting with a traditional nine-per-side arrangement of SB28 subwoofers that hit hard with a power alley right down the middle, the crew opted to take a more scattered approach to its extended low frequency map, deploying the low-end boxes in various blocks of two, three or four.

Consoles at both front of house and in monitor world were Live L500 models from SSL. “Prior to this tour I’d been on a (Avid) Profile for many years with different bands, and it served me well,” Moore notes, relating the backstory behind his recent switch to a new board. “But as fate would have it, at about the same time I started thinking about making a change, LMG purchased a pair of L500s, then asked me if I’d like to take one out. I did some research and said ‘let’s do it.’ Ultimately, both Rob and I have been quite happy with the results.”

With 52 inputs coming from the stage to both the house and monitor world, the SSL’s expansive real estate was readily welcomed by both Moore and Greene. “Over time, you reach your limits on older digital consoles, and you ask yourself where you can go next,” Moore explains. “You start wishing you could put a VCA anywhere you want it, or that you could have a group next to a channel. There’s this point where you just want more.” 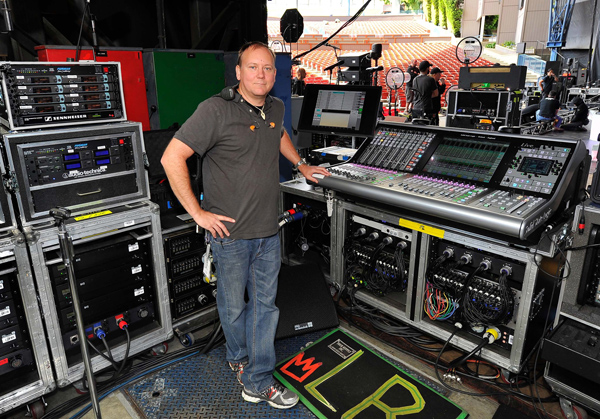 With the SSL Live L500, Moore was able to start the tour with a clean slate that let him put together his console exactly the way he wanted it for the band.

“It gave me a level of flexible functionality that did indeed allow me to put anything anywhere, and access it in many different ways,” he says of the build process. “The board has layers and layers of places you can put channels, and then you can move any of those channels and even stem groups. What I enjoyed about the analog days is that you had everything right in front of you. I recreated that kind of footprint on the L500 using the stem groups.

“For example, I put all my toms into one stem. For the most part, once you get your toms set, the levels should stay relatively the same. Once they are in a single stem, I can move them wherever I need them. Conversely, if I need to get to the toms individually, I simply press a ‘query’ button and they all appear in front of me, then I make my adjustments. Once I go out of query, I’m back to my basic, simple surface. I can do the same thing with guitars, kick drum, anything.”

Where’s The Energy? Understanding The SPL Metric “dB C Minus A”

Focusing on the additional information to be gained by looking at both C and A Weighted data together – viewing multiple metrics gives us ...read more →

In The Studio: Instrument Tuning Tips For Better Recordings

Something's not right... The tracks just don't pop the way they do in your imagination... What could it be?