Odds On Records & Studios is celebrating the grand opening of its $2 million multi-faceted recording facility in Henderson, Nevada, just outside of Las Vegas, and featuring both vintage and state-of-the-art gear as the largest duality console in North America, a 96-input Solid State Logic (SSL) Duality.

Bobby Ferrari, head of audio production as well as the development and installation of the new facility, is excited about what Odds On will have to offer its clientele.

“We’re all about putting customer service back into the record making process,” says Ferrari. “We have great lounges and private areas, lots of vintage outboard gear and classic microphones combined with state-of-the-art large format analog consoles and the latest in Pro Tools technology. We also have numerous acoustic environments and a highly skilled staff.  In the end, you have artists who are artistically satisfied with superior product.”

In addition to the newly built main tracking room where the Duality is situated, the new 12,000-square-foot building comprises a new mixing studio that furnishes an 80-input SSL 9000 K console, as well as a writing, editing and production suite that features an SSL Matrix. Each of the rooms, built by Acoustician Carl Yanchar of Yanchar Design & Consulting Group, also has its own client lounge.

The studio is outfitted with an array of high-tech equipment including Allen Sides’ Ocean Way monitors, 40 x 80 Pro Tools inputs and outputs in each room, as well as outboard gear and universal audio A/D converters.

Odds On Records & Studios took nine months to build.  It is currently in the final phase of construction for its mastering suite, which is expected to open by summer 2009. Already gaining momentum in the Las Vegas area, it has hosted several A-list artists including Alicia Keys, Akon, T.I., Smash Mouth lead singer Steve Harwell and Huey Lewis as well as Motown Legend Mary Wilson, the Band, Ultraviolet Sound, and up and coming Australian group, Blue King Brown.

Read More
My Touring Inspiration: Motivation In A Life On The Road

Cites ASP4816 analog console’s hybrid capabilities as a primary reason for its selection for his Surrey, England recording facility. 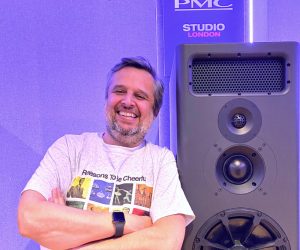 As a brand ambassador, recording and mix engineer seeking to introduce the company’s products to a wider and younger audience.