Years in the making, Johnson slowly constructed the studio in his Austin, TX home. “I always wanted a great rehearsal space, and it seemed natural to make it a recording studio as well,” he says. “I took my time because I wanted to do it right. I like to think about the tools I use the same way I think about guitars.

“When I find the right guitar, it facilitates my playing,” he continues. “It’s like I can feel the push of the polarity, the wind’s at my back, and soon I’m not paying any attention to the guitar itself… I’m just making music. It’s the same with the studio and all the equipment and processes in the studio. At their best, they fall away and I’m just making music.”

Most recently, Johnson collaborated with jazz guitar great Mike Stern on the album Eclectic, which the two recorded and mixed at Johnson’s studio with the help of accomplished recording and mix engineer Kelly Donnelly.

Most of the engineering duties at Johnson’s project studio fall to Donnelly. “Kelly and I often found ourselves second-guessing our mixes,” says Johnson. “We’d take a mix that sounded perfect in the studio and notice huge bumps or holes when we played it other places. It’d be like, ‘we must have overlooked that in the studio!’

“But then we’d go back to the studio and those bumps or holes wouldn’t be there. So there was a lot of back and forth, which wasted time, energy, and inspiration. I became very interested in finding a near field system that would ensure our mixes translated outside of the studio, especially as we drew close to working on Eclectic. People with ears I trust told me that ATC is the way to go.”

After performing due diligence with trials of numerous top-end reference monitors, Johnson arrived at the same conclusion. He purchased a pair of ATC SCM25As, a three-way active design starting with a 7-inch low-frequency driver. “The ATCs have a great vibe and they’re fun to mix on,” Johnson says. “The imaging is solid and in-phase, and the top end is natural – not glitchy or peaky or spikey. They’re pleasant at whisper volume or blaring, and the response seems pretty linear across that range.

“I’ve also noticed that we can monitor at high volumes on the ATCs as long as we like and they never become fatiguing. So the in-studio experience on the ATCs is great. Beyond that however, the mixes we’ve done on the ATCs translate beautifully, and we don’t have to second-guess ourselves anymore.”

“The ATC monitors are the most accurate loudspeakers I have ever heard, and I can’t imagine using anything else,” Blakemore states. “They work equally well on any genre of music, which is very unusual and particularly important for Eclectic. As the name promises, Eclectic is eclectic! It runs from rock, to jazz, to blues, to R&B, and to everything in between. The ATCs were critical for getting the high end correct and consistent across all those styles.

“Similarly, the ATCs were critical for making sure the low end was true and in the pocket from song to song,” he concludes. “Once I get things right on the ATCs, I’m confident that the final product will translate to any other system in the world.”

ATC monitors are distributed in the U.S. by TransAudio Group

Parking lot at Experience Christian Center in Orlando assumes a “drive-in theater” approach for services with reinforcement via Aero-20A arrays and LX-218 subwoofers. 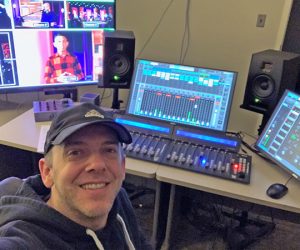 Church runs a Dante audio network that was in place prior to the LV1, with conversion for the mixer done via a DiGiCo Orange ...read more →