A little bored with the “tried-and-true?” Try some fresh approaches that are off the beaten path...

This article is provided by Bartlett Audio.

Getting a little bored with the same old “tried-and-true” microphones and techniques? Let’s have some fun with fresh approaches that are off the beaten path.

To create a differential (noise-canceling) mic, tape two identical omni mics together, one over the other, separated by a block of wood (Figure 1). Mix both mics at equal levels but with one mic switched in opposite polarity. Have the performer sing close to the top mic.

Many years ago, the Grateful Dead used this method to cancel sound from a huge stack of amps on stage. It’s actually the same as a figure 8 ribbon mic aiming up and down. It works best with in-ear monitors. Be sure to use a foam windscreen.

Need a zombie effect? Try a mic against the singer’s throat. Want a comb-filter sound? Mike the singer with two mics at different distances, mixed together. Hollow sound? Sing unto a mini mic placed inside the sound hole of a guitar. Also, have a singer use a megaphone, either acoustic or electronic. 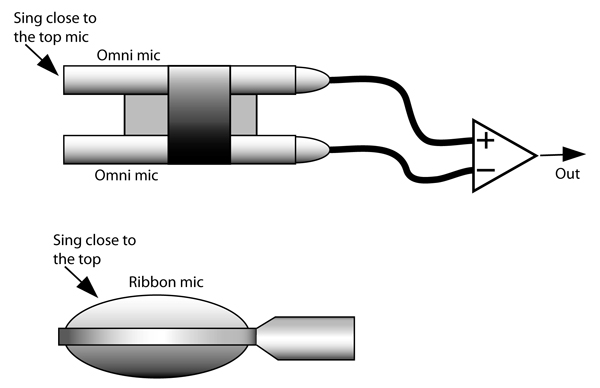 Try the one-mic technique invented by engineer/producer Tchad Blake that I touched on in a previous article (here) – take a large-diaphragm cardioid condenser and mount it over the kick drum top, aiming at the snare drum. (This technique is pictured in the opening image.)

It picks up a decent balance of the snare, toms, kick and cymbals all around it, and the balance can be tweaked by moving or rotating the mic, and raising/lowering the cymbals. There may be some off-axis coloration of the cymbals depending on the mic model and position, but in my experience it’s not too serious.

Another single-mic method employs a mini omni condenser. Clip it between 1 and 4 inches over the snare drum rim, in the middle of the kit over the drummer’s knee. It will pick up the snare, toms, and cymbals all around it (Figure 2). Put another mic in the kick. And for a punk band, try a single Shure SM57 overhead at the height of the drummer’s forehead. 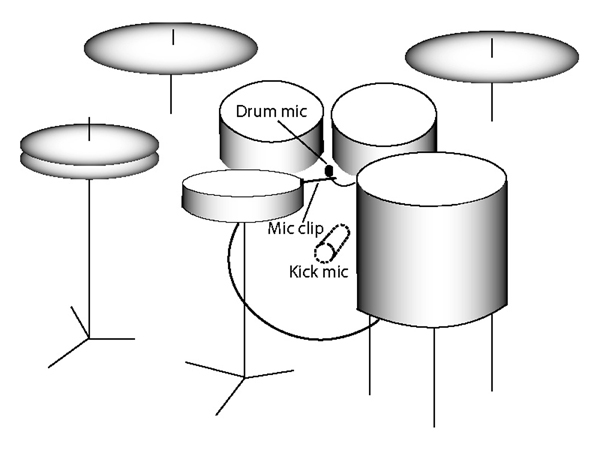 Figure 2: Miking a drum kit with a mini omni mic.

• Tape a couple of boundary mics (such as Crown PZMs) to the inside of a clear acrylic drum gobo. Add a PZM inside the kick taped to the shell. Another trick: tape a PZM to the drummer’s chest. This works especially well in picking up a large group of percussion instruments as the player moves around. For some added fun, tape a mini mic to each maraca, bongo drum, cowbell, etc.

• Mike a child’s toy drum set instead of a regular pro set.

• Hit the cymbals lightly with some rugged dynamic mics while amplifying their signals. That is, use the mics as drumsticks. The cymbal sound will bloom and shrink as it’s played.

Try a small-diaphragm condenser near the player’s right ear, aiming down at the bridge (Figure 3). You’ll hear a natural sound in this location, but watch out for feedback. 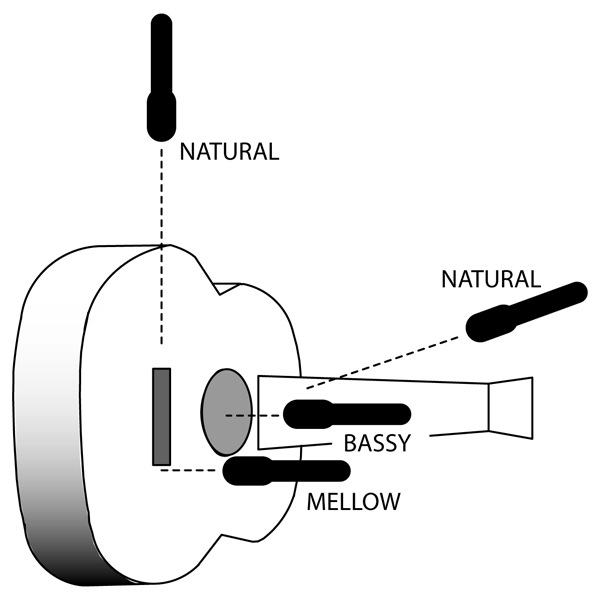 Tape a mini omni condenser mic just inside the sound hole, and roll off 100 Hz about 10 dB to compensate for the boomy tone in there. This method provides excellent isolation. It also works well on a ukulele or an oval-hole mandolin.

Read More
Learn It, Live It: Seven Things To Definitely Avoid While Mixing

How about an f-hole mandolin? Take a mini omni condenser, wrap its cable in felt or foam about an inch behind the capsule, and stuff it under the strings between the tailpiece and bridge (Figure 4). Roll off the lows and highs a few dB.

To capture a singing guitarist without phase interference, use two ribbon mics with their tops touching in a coincident-pair array. Aim one at the mouth and the other at the guitar. 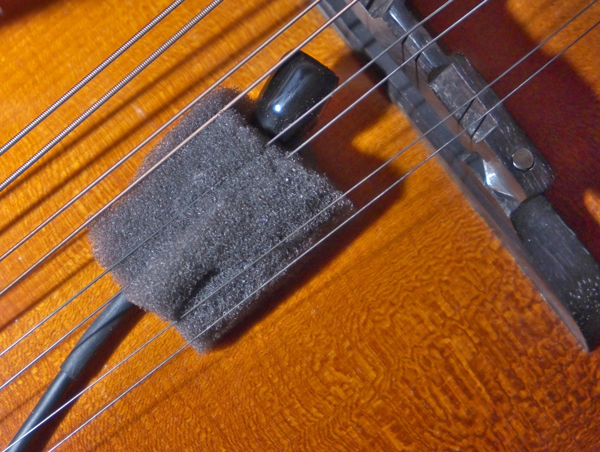 Some singers/guitarists hunker down so that their head is just above the guitar. Capture them both with a single small-diaphragm condenser below the guitar, aiming up.