NEXO loudspeakers, in the hands of rental company PogoArt, have played a central role at the World Games in Poland, bringing sound reinforcement to 24 venues in the city of Wroclaw.

Officially called the X World Games, this event is the largest competitive sporting festival after the Olympics. Nearly 1/4-million people gathered in Wroclaw to watch 3200 athletes from 111 countries in 31 sports which are not contested in the Olympic Games. Featuring powerlifting, karate, squash, water skiing, billiards, to name a few, the 2017 program encompassed more than 200 events.

Wroclaw-based rental company PogoArt was responsible for providing sound reinforcement to all 24 host venues, which was, according to owner Sławek Pogorzała, “a logistical and technical challenge, requiring a tremendous amount of equipment.”

With the support of Lauda-Audio, the NEXO distributor for Poland, PogoArt implemented an SR uniform of NEXO loudspeakers, teamed with Yamaha consoles. More than 340 NEXO cabinets were deployed, including line array systems of STM Series, GEO D and GEO S8 designs, as well as a large number of pole-mounted PS Series. It took 50x NXAMP controller/amplifiers to power all the systems, along with 25x Yamaha CL and QL Series mixers, and 18x Yamaha RIO3224 stageboxes. 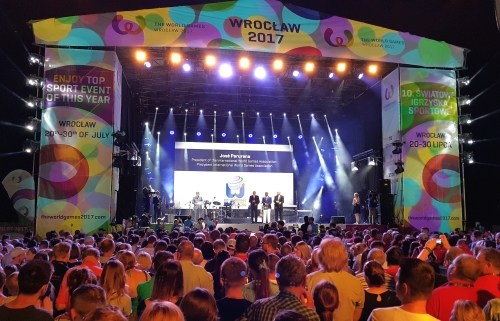 Infrastructure for the event included 1230-meters of CAT 5/6, 1100-meters of fiber optics, 1570-meters of loudspeaker cable and well over 2000-meters of power cable.

60 sound engineers and technicians were needed to operate the different PA systems, which made use of 120 wireless and 115 wired microphones.

“The biggest challenge was of course logistics. There were 24 venues, and at some of them, the events were running from early morning till late evening,” says Pogorzała. “For us, the most important factor was the stability of these installed systems. When so many things are happening at the same time, you need to be able to rely on your equipment. Once again, NEXO loudspeakers and Yamaha consoles proved the perfect match, for the events and for each other.”

It may not receive the global press attention of the Olympics, but the World Games is an extraordinary festival of sport, and the first of its size to be held in Poland.

Marcin Popek of Lauda-Audio reports “a unique opportunity for us to exploit almost all the systems in the NEXO catalog, we even had the new GEO M10 line array as well as the STM M28 for the primary venues. With great products and great teamwork backing up our main contractor PogoArt, this shows that NEXO can excel on the world’s biggest events.”