The studio operation of the U.S. Food & Drug Administration (FDA) recently implemented a new Yamaha RIVAGE PM10 digital console to enhance the production values of the administration’s content and keep its studio capabilities current and relevant into the future.

Chad Heupel is the director of the FDA’s television studio, one of the largest operated by a government organization in the Washington, D.C. area and used to create employee training courses and public service announcements. The studio also produces live and recorded programming to support various initiatives with other federal agencies in the drug and medical devices industries.

“Higher-quality equipment is going to give us higher-quality content,” Heupel states. “That will, in turn, add credibility to the FDA’s message. Reliability is also key. We’re often delivering critical public information, live, so any type of system failure would erode confidence in our ability to protect and monitor public health and safety.”

The studio utilized a Yamaha MC7L console for years and had no issues with it. However, considering future growth, expanding production requirements and elevating the FDA’s perception, Heupel and team decided on the PM10. They worked with Austin Wydrzynski of Washington Professional Systems, a Yamaha dealer, to configure the console and make sure it would be expandable for the future, but also serve their needs today.

The studio does a high volume of audio mixing for large-scale live programs, which often require additional freelancers to complement the in-house team. Heupel; “We don’t always know who is going to be available on show days so we needed a console that is intuitive enough where any operator who knows a professional board could sit down and within 20 minutes be ready to mix a live show for us.”

The studio team also looked for channel scalability, plugin availability, support for Dante networking connectivity and the flexibility to handle a diverse schedule of productions. The console arrived in June 2020 when Washington, D.C. (and the rest of the world) was in lockdown due to the pandemic. As a result, Heupel and team haven’t had a chance to use the PM10 yet for traditional in-studio productions. Instead, it’s been adapted for remote and online production, but the results have been no less stellar.

“The studio has always supported public meetings and presentations, usually held in a hotel ballroom using a portable field studio set-up,” he says. “Since COVID hit, all our meetings have gone virtual. We’re still doing the public webcasts, but they’re no longer in a ballroom with remote-controlled cameras and 25 panelists sitting around a U-shaped table. Now we have a dozen channels of Skype that we feed mix-minuses to and bring in independent audio signals from each source. And, where we used to set up 20 microphones in the studio, now it’s 20 different mix-minus channels and 20 different audio sources. The studio control room is still running the audio board, but instead of the images coming in on camera, they’re coming in on dedicated Skype channels.”

He adds that the PM10’s Dante support also contributes to the studio’s new capabilities: “This console combined with Dante gives us infinite flexibility. With the COVID shutdown, the ability to handle 144 channels in and out on a single network cable was exactly what we needed to keep us functioning.

“When I buy equipment, I buy the best I can because I expect it to operate at the highest levels for at least 10 to 15 years,” Heupel concludes. “We chose this board because of the Yamaha reputation for quality. Our previous console was a workhorse for 12 years and we have no reason to expect anything less from this one.”

Organizations, businesses and live events staff coming together on August 11 to shed light on an industry in dire need of the right support ...read more → 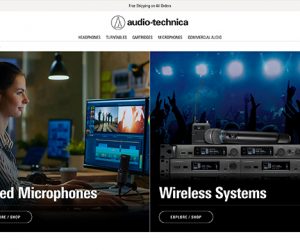 Content-focused on company’s entire range of products, offers enhanced e-commerce functionality with free shipping on purchases within the U.S., and more.