Mike Fanuele, who has worked with Dashboard Confessional and Fountains of Wayne, among others, served as the band’s house and monitor sound engineer (in addition to production and tour manager_ for three SXSW gigs and a subsequent two-week tour that hit New York, Chicago, and Los Angeles, two television dates with Jimmy Fallon (NBC) and David Letterman (CBS), and the Bamboozle Festival in New Jersey.

“The e 935 has a great sonic quality so that Taylor, and everyone else for that matter, can hear some nice hi-fi in the monitors,” said Fanuele. “Importantly, its tight pattern control gives me more gain before feedback then I’d get with most other live vocal mics. So we have nice, loud, clear vocals in the monitors, which fuels the energetic performance that these guys deliver.”

“It is of course equally important,” he continued, “that the mic sounds great for me out front. It has a smooth midrange with a bit of a presence peak that helps the vocals cut through without being annoying or harsh. Taylor’s vocal style is very dynamic, and when he moves on and off mic, the e 935’s frequency response changes very little. So with just a little compression, it’s easy to get a solid vocal that sits nicely in the mix no matter what’s happening on stage.” After a pause he added, “the e 935 looks cool on TV, too!” 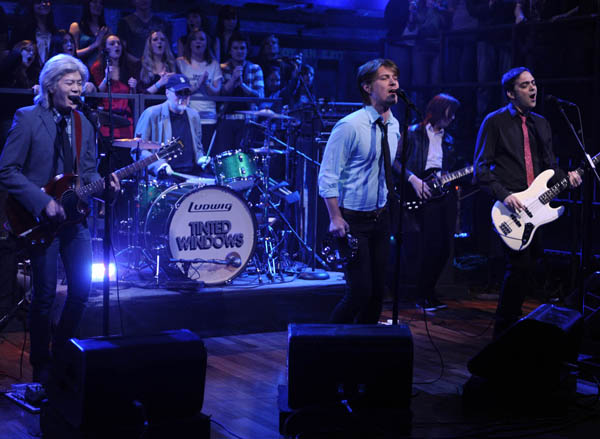 Fanuele also used Sennheiser mics on Bun E. Carlos’ drums, including an e 902 on bass and e 904s on toms and bottom snare, at Tinted Windows’ very first public performance – an unannounced warm-up show at a small club near their rehearsal space in Tulsa, Oklahoma. The next day, while Fanuele and the band were milling around their hotel lobby in Austin, a quick-handed thief made off with the bag containing all the Sennheiser mics.

“Sennheiser has always been there for me. Their global support – their support in general – is peerless,” said Fanuele. “At this point I have, on several occasions, contacted Sennheiser with a request, and the very next day someone shows up at the studio or the hotel lobby with the product.

“At some point you start to question it, ‘what did I do to deserve this royal treatment?’ Anyway, this circumstance was no exception. Sennheiser was right there with new mics so that the tour – including a number of television appearances – could go on as planned.”