Marking its ninth year, Neon Carnival returned to Thermal, California earlier this month. Officially unaffiliated, the invitation-only Coachella adjunct event is held at the HITS Desert Horse Park. The annual show is a tent pole social stop that consistently brings together Hollywood’s A-list with some of the biggest consumer lifestyle brands.

“The organizers wanted to create a very immersive audio experience,” explains Neptune Productions president, Raffi Ganoumian. “Since the venue is relatively open and flat, and the stage has a low ceiling height at just 16 feet, our solutions needed to be both compact and visually inconspicuous while offering a high level of fidelity and output.” 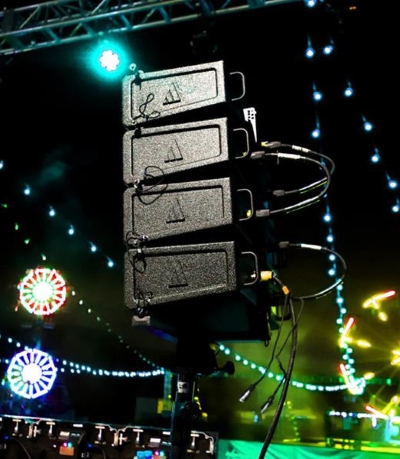 “The ability to mix and match VUE elements makes it really easy to customize arrays for challenging environments like this,” explains Ganoumian. “We had a lot of creative freedom to address everything, sight lines and coverage to weight, while being fully confident that voicing would always be consistent and top notch. And what can I say about the subs? They just kick ass.”

Neptune flexed their creative muscle throughout the rest of the venue as well. At front of house depth, the team flew two additional four-box al-8 arrays on each side. One left and right pair was delayed to provide auxiliary support to the back of the venue, while the second left and right pair faced forward to complete the immersive sound experience that event organizers initially requested.

“The VUE line arrays deliver a level of flexibility that allows us to be incredibly creative and get a lot of value out of a single inventory,” concludes Ganoumian. “Plus, they just sound really amazing. Regardless of how hard we push them, they always have more to give — especially at the high end.”

For the Neptune team, the real measure of success at any event is client satisfaction, and in that measure, Ganoumian is pleased to report that VUE has earned a coveted spot on A-list. “They were very pleased with the end result. We’re already talking about future collaborations.”

Neptune plans to next deploy their VUE line array systems over the Fourth of July weekend at the annual Navasartian Games, an Olympic-style event for Armenian-American athletes, which is expected to draw over 30,000 participants and spectators.