As the son of the late country music singer Chris LeDoux, singer/songwriter Ned LeDoux had the good fortune to get his musical career started by playing drums in his father’s road band, Western Underground. These days, he heads his own act as a vocalist and guitarist. His first full-length album, Sagebrush, launched in late 2017 on the Powder River Records label and, since that time, he’s been busy on the tour circuit.

For a recent Hope Community Christian Academy presents Ned LeDoux performance at the Sky Ute Resort, LeDoux and his band played to an enthusiastic audience using loudspeakers drawn from the StudioLive and WorxAudio catalogs of PreSonus Audio Electronics of Baton Rouge, LA. 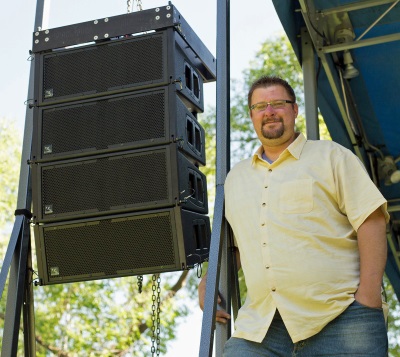 “The Ned LeDoux concert took place on April 7th, 2018 in Sky Ute’s Casino Ballroom,” Willyard reports. “The room measured 112 feet wide and 123 feet deep with a ceiling height of roughly 30 feet. The stage was 5 feet above floor level and measured 40 feet wide by 20 feet deep. There were bleachers along both the east and west walls that seated around 700 people, along with 29 tables on the floor that seated 10 people per table—plus a dance floor in the rear of the ballroom.”

“For this event, we flew four WorxAudio XL1 line arrays each for the left and right sides,” Willard explains. “Low frequency support came from four WorxAudio TL218SS super subs that were placed on the floor—evenly distributed across the front of the stage. For front fill, we used two PreSonus StudioLive 328AI enclosures, which were augmented by two StudioLive 315AI cabinets that served as out fill loudspeakers.”

When queried about those attributes of the PreSonus loudspeakers that made this assortment the ideal match for the LeDoux concert, Willyard offered these thoughts. “Being that the stage took up a portion of the ballroom and made the room wider than it was deep, I needed a loudspeaker system with very wide horizontal coverage that also could deliver good speech intelligibility and music reproduction. In researching available loudspeaker systems, I decided on the WorxAudio XL1 because of its design characteristics, wide 160-degree horizontal dispersion, user reviews, and company reputation. After listening to the XL1s for the first time, I knew they would do everything my production company required. In their size and class, I would put them up against any brand loudspeaker on the market.”

Both for live and installed sound projects, capable and responsive customer and technical support services are crucial. When asked about his experience with PreSonus’ support services, Willyard was very complimentary, “From the first phone call to inquire about their loudspeakers all the way to the first day of use, working with PreSonus’ Commercial Division was a pleasure. Tony Flammia, Jon Taylor, and Stevie Meranta went out of their way to make sure all my questions were answered and that I had the best possible system specifically suited to the requirements of my company and budget. Their expert knowledge of the products and their ability to explain the technical specifications in a way that made sense were two major reasons I decided to go with PreSonus.”

Reflecting on the outcome of the Ned LeDoux concert and his overall experience with the PreSonus Commercial Audio Division, Willyard offers these parting comments, “Looking back, the only thing I would have done differently might have been to buy these speakers a year or two earlier. In all the years I’ve been running sound at indoor and outdoor events, I have found that the key is to start with a system that sounds great right out of the box—and that’s precisely what the combination of WorxAudio and StudioLive loudspeakers provide. Don’t take my word for it; go listen to PreSonus’ loudspeakers for yourself and be prepared to be blown away by their size, quality, clarity, dispersion, and overall great sound.”