Writing the software was an interesting experience as it forced me to analyze what I do, think and feel when mixing a musical. Software developers sometimes have a reputation for not understanding user requirements but in this case I had to define my own requirements, implement them in code, then test the resulting software on myself in a situation where I wasn’t able to fix its behavior.

I quickly learned that when mixing a show, I have a far lower tolerance for usability issues than when I’m using software in everyday contexts. It’s a unique kind of horror when you’re mixing a musical and you encounter a bug you wrote in your own code that breaks your flow and there’s nothing you can do about it until the performance has finished. (Fortunately the audience never noticed.)

At the end of the pantomime’s season I was reasonably happy that I’d solved my problem and the software was reliably doing what it needed to do. Instead of putting the software away until the next show, I started pondering what other useful things I could get it to do, particularly functions that would be tedious or impossible to perform on the X32 console itself.

The software ended up turning into an ongoing side project where I’d spend a few hours every now and then trying new ideas and refining the user interface, although the features that ended up getting implemented were largely driven by the shows I was designing at the time.

ML: Now that you’ve crafted yourself a software tool that does what you need, are you happy with it, or do you consider it an eternal work in progress? Are you thinking of upgrades? What does the future hold for X32TC?

JH: Is software ever finished? What I’ve found is that now the finicky mundane DCA programming is easier it’s freed up time for creative thoughts which generate more ideas for X32TC.

As an example, I’d previously considered effects automation to be too complicated for my shows given the limited rehearsal time and high probability of programming errors, but now I can program effects assignments alongside the DCAs while marking up the script – come tech rehearsal time, it just works seamlessly.

In a way, the tool I created to make programming shows easier now entices me to create more complicated designs that necessitates new features in the software.

In the immediate future I have a backlog of features I’d like to implement, mainly focusing on scenarios that are common in community theatre such as mic swaps and channel restructuring, e.g., if the number of wireless mics gets reduced on a show or an ensemble understudy is split across tracks).

I’ve also received lots of interesting suggestions from people who use the software – it’s fascinating to hear how people use X32TC and find different ways to integrate it into their workflows. It seems that it’s made control group mixing more accessible and allowed people with not many resources to create complex musical mixes; the craziest I’ve heard of so far is eight wireless mics swapped across 18 actors for “We Will Rock You School Edition.”

Ultimately the software is still a side project between my work and theatre commitments, so I don’t get to work on it as often as I’d like. As a general rule I implement major features between productions and then test them on a show before releasing them to the public. I’m humbled by the praise X32TC has received and am a bit astonished at how widely it’s being used – when I wrote it I didn’t expect it would end up in theatres around the world. Chookas!

(“Chookas” is an Australian theatrical term for good luck.)

Michael Lawrence is a Smaart instructor and application support specialist for Rational Acoustics. He's also an independent front of house engineer and system tech, and serves as the technical editor of various pro audio publications. Send him your thoughts at [email protected]
All Posts
PrevPreviousDirectOut Extends Features Of PRODIGY.MC Modular Audio Converter
NextFull-Metal Prep: The Value Of A Well-Appointed Workbox At Every GigNext
Live Sound Top Stories
Explore All Live Sound

Discusses "being the only person an artist has" when wearing multiple hats as a front of house engineer, tour manager and perhaps more – ...read more →

Owner Aaron Young designed the system, which was centered around an ADAM frame with about 100 channels of RVON for long-haul transport to connect ...read more → 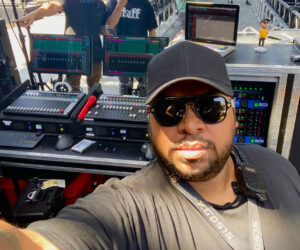