Britannia Row deployed three XL8 for the main stage, while EFX Audio supplied two XL8 for the Radio One stage

A plethora of Midas digital mixing systems were used across this year’s three-day T in the Park festival held in Scotland earlier this month. Britannia Row deployed three XL8 live performance systems at front of house on the main stage, while Scottish rental company EFX Audio supplied two XL8s for front of house on the Radio One stage.

Midas digital systems were also very much in evidence as headlining acts brought their own to the festival. These included a PRO6 and XL8 for Dizzee Rascal; FOH PRO6 systems for Faithless and Florence and the Machine and PRO6s at FOH and on monitors for Paolo Nutini. Rap artist Jay Z also arrived with an XL8 system for his appearance on the main stage.

On the Radio One stage, it was in-at-the-deep-end for many of the engineers who were using an XL8 for the first time. EFX set up the two XL8s in tandem, using the 431 active splits to enable them to access all the mics all of the time, on both consoles. Guest engineers were then able to ‘listen-in’ to the preceding band and get a feel for the EQ, as well as lining up gates, compressors, reverbs and overall functionality prior to line-checking their own band.

EFX’s Steph Fleming explains, “We felt it was important for guest engineers to become acquainted with the XL8s prior to show time. After that, the consoles would speak for themselves. For most, their big impression was of the sheer audio quality of the XL8, and also of the way it feels very much like a ‘proper’ mixing desk.”

“For us, it’s always about the great sound,” says Fleming, “but equally essential is the flexibility especially when you’ve got some 24 bands appearing over three days.”

“The sound was exceptional, and I found it very easy to mix on,” says Sophie Grant, front of house engineer for Jamie T and Kate Nash. “Selecting the VCAs to see my channels on the screen was so much easier then flipping between pages or layers. I also liked the fact that I didn’t have to flip layers to access my FX. And the colour coding is fantastic. Midas have always been my desk of choice, now I want to do a headline show on an XL8.” 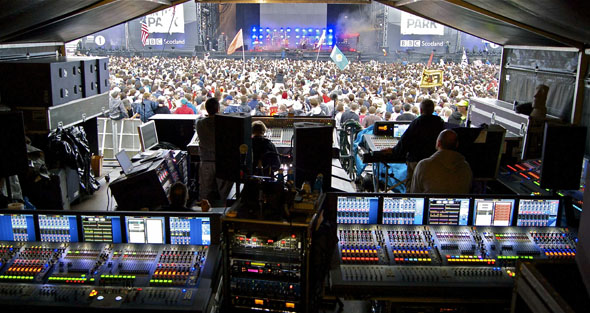