More Things I Learned Running A Sound Company In The 1990s

Boost profits and efficiency by watching for opportunities to streamline your operation by eliminating redundant practices and poor communication.

Previously (here), I described some early adjustments made to the daily running of a sound company I worked with in the 1990s, particularly the ins-and-outs of show inventory.

That article apparently struck a chord, plus I’ve recalled several other things we did that made a significant difference, so in no particular order here are some additional practices.

One thing that was a common occurrence when I took over was the appearance of one or more account managers late in the day with the announcement that they’d just sold our services for a show that loaded in the next morning. It would inevitably lead to a late night and the necessity of feeding the shop crew, usually pizza. This, of course, required a cash outlay, and if it happened more than once in a week, would often lead to the staff going into overtime.

At the same time I noticed that some of the staff habitually had trouble making it to the shop on time in the morning. My solution was a split shift. I called the staff into my office and asked who were early risers, who liked to sleep in, who needed to leave early to beat traffic, etc.

Here’s what we worked out: The early shift was 8 am to 4 pm, with the people on that shift responsible for unloading any trucks that came in over night and checking in those shows. The later shift was 10 am to 6 pm, and they were responsible for loading trucks at the end of the day.

During the time that the shifts overlapped, everyone was responsible for building shows and rentals, as well as the usual day-to-day tasks. There was also a tacit understanding that if we got really slammed, the early shift would stay at least another two hours to help out and everyone would stay longer if needed.

The results? Happy staffers that got a choice in their work hours, less overtime, fewer pizza parties, better workflow through the shop, and regular business hours from 8 am to 6 pm, something that was greatly appreciated by our dry rental customers. And at no cost to the company.

When I first started, it was a point of pride that every loudspeaker was tested with a frequency sweep before it went out the door. It didn’t take me long to realize that while this was great, it meant that problems were being discovered as the units were on their way out of the shop. 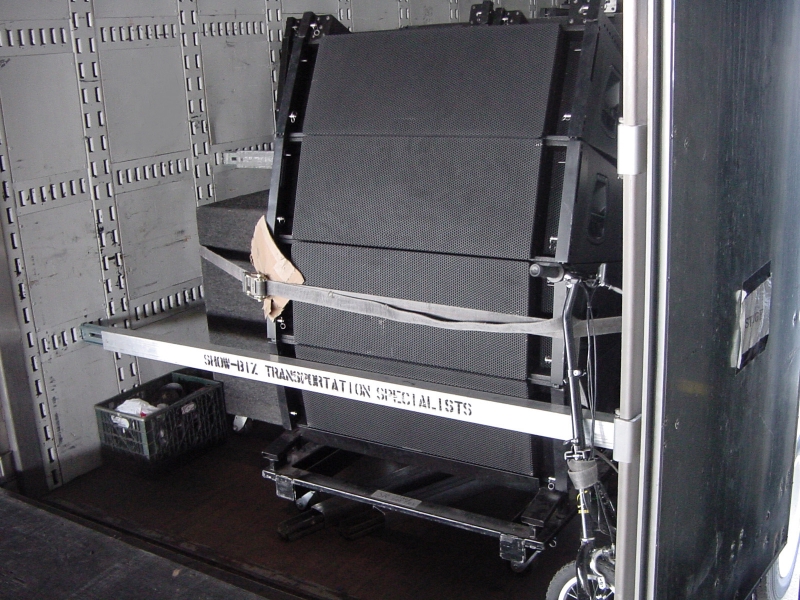 I changed the process so that every loudspeaker was swept on return from a job.

This provided two benefits: it gave us far more time to change out drivers or make other necessary fixes, and if the loudspeaker was damaged either through negligence or operational failure (say, a bad amplifier), it gave us a much better chance of finding out who/what was responsible and doing something about it.

There was a week in the summer of 1992 were we got just about every ticket possible for trucking violations. There were overweight cube vans, overweight 5-tons (because they were the lower weight class anyone-can-rent-and-drive moving vans), 5-tons that were not overweight for their class but were being driven by a driver who didn’t have the proper license for that weight class, and so on.

This required several responses:
1) I got the company to agree to facilitate our regular techs and freelancers getting higher weight class licenses. This typically involved nothing more than encouraging them to take the written test and get the medical, and then supplying a truck and driver so they could do the road test.

2) Account managers were often specifying a cube van to make their numbers work on a quote, and that had to stop. We had cube vans leaving the shop with their back tires smoking because the box was sitting on them.

I also made a policy of “no seat, no seat belt, no rider” so they actually had to think about how to get the crew to/from an event, safely and legally.

3) I began inspecting every load that left the shop, something that continued through the 8-plus years I was there, right up to 53-foot trailers. After a while, my suggestions and changes trickled down to the general shop staff, which resulted in them becoming more knowledgeable about truck packing, securing loads and weight distribution.

When we started to get better at checking in shows, I found there were often a few items that could not be accounted for as either definitely being returned or definitely being lost. The most common was the “quad box” (i.e., two duplex Edison plugs) extension cord.

Because we were an integrated company with sound, lights and staging, sometimes one of these cables would have been packed by audio and borrowed by another department on the show. And sometimes it might have been lent to the promoter for some reason, or sometimes it was in the account manager’s car because he’d found it on a walk-around after load-out, and so on.

The trouble was, even if one turned up, there was no way of really knowing if it was the one that had been marked as missing because while each one had a sticker with the company’s coordinates on it, they did not have a unique number. Since just one of these cables, when built properly, has at least $100 worth of parts, it’s an important thing to be able to keep track of.

So I implemented a program where every one of these cables was given a unique number and suddenly it was possible to know with 100 percent certainty if one of them was truly missing or not. (It sounds so basic now but we were years away from getting a bar code tracking system.)

Two things to keep in mind on this front.

The first is deciding if an item is worth that level of inventory management. For example if you pay $4 for 3-foot by 1/4-inch DI cables, in bulk, is it worth it to have shop staff spend a lot of time looking for a lost one?

The second is if an item is likely to be seen on camera, like a microphone (or the female end of a mic cable), develop a discrete way of numbering it (and we all know to put the tie and the ID on the male end of a mic cable, right?) so the bar code doesn’t lose you a gig when it shows up on IMAG.

Ike Zimbel is a wireless frequency coordinator and tech based in Toronto. Reach him via LinkedIn. Ike is a freelance RF technician available for tours, one-offs, off-site frequency coordination and consulting on RF issues.
All Posts
Top Stories
Explore All Study Hall