More Than A Project: Audio For Alan Parsons In The Live Realm

A studio legend takes it out on the road

Few have achieved the level of success of Alan Parsons as an engineer/producer, as well as a performing artist in his own right.

After beginning his career as an assistant at Abbey Road Studios at age 19, he worked on iconic records such as Abbey Road and Let It Be before further cementing his reputation on projects with The Hollies, Al Stewart, Paul McCartney and Wings and, of course, with Pink Floyd as engineer on Dark Side of the Moon.

He remains active in the studio – recently undertaking projects such as The Raven That Refused To Sing (And Other Stories) by Porcupine Tree’s Steven Wilson, and Jake Shimabukuro’s Grand Ukulele, and he also continues to tour with the Alan Parsons Live Project (APLP), completing a rare run of U.S. shows in February, 2013 before heading to Europe for more live dates.

Given Parsons’ reputation as a recording artist and engineer, it’s natural for anyone mixing front of house for APLP to have a case of the nerves the first time out. “I’d be lying if I said I wasn’t nervous at all,” says Nashville-based Martin Frey, who’s been the band’s house engineer since 2010 and is a long-time fan of Parsons’ music. “But I did my homework. I still have those records on vinyl, and when I got the set list I arranged the tracks in order on my computer, listened to them for several weeks and made notes, so I went in with a clear mental picture of what I was going for.”

Frey adds that Parsons immediately put him at ease prior to the first show: “Alan came out into the house to listen during sound check so I went over and said, ‘Well Mr. Parsons, what do you think?’ And he replied, ‘could you push the vocals back in the mix and put a little more bottom on the snare? And by the way, please call me Alan.’ He’s just a straightahead guy and knows exactly what he wants to hear.” 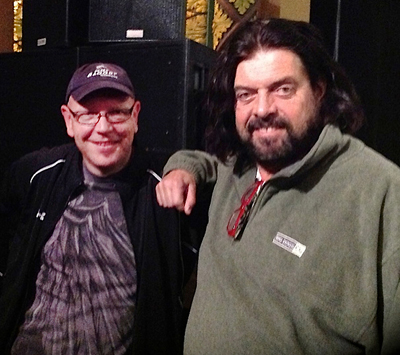 Front of house engineer Martin Frey with Alan Parsons prior to a show on the recent tour. (click to enlarge)

For his part, Parsons is content to leave the mix to Frey. There are audience members, however – audio engineers and enthusiasts of all descriptions who are fans of Parsons’ work – that are quite willing to offer comments, Frey says, but, happily, this feedback has been positive.

While audio professionals have long been attracted to Parsons’ work and APLP shows, interest has increased since he released a series of videos entitled the Art and Science of Sound Recording in 2010, which trace the development of sound recording “from Edison to the MP3.”

Speaking with me before heading off for the European leg of the tour, Parsons said that the intensified interest is encouraging, adding that he’s also considering a follow-up project that will deal with live sound exclusively.

Pick A Console
Frey’s approach to mixing APLP is similar to that he employs with other artists he’s worked with, which range widely and includes rock bands such as Journey, country stars Tanya Tucker and Big & Rich, and large orchestras. “Although I work in a wide variety of musical genres, from a mixing and production point of view, I approach everything the same way,” he notes. “I study the material, make notes, and unless someone tells me differently, I go for what the records sound like.” 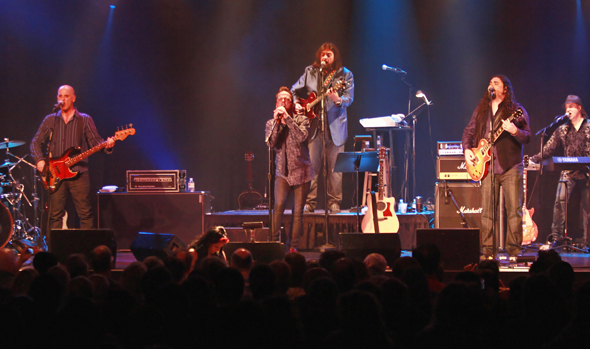 When tuning the PA in advance of shows on the recent tour, Frey utilized Sound Check, a test disc released in 1993 by Parsons and Stephen Court. “I’ve been using that for 20 years to listen to the human voice, which allows me to ascertain the intelligibility of the PA immediately, and to the drums and bass to fine-tune the low end,” he explains.

That’s a key concern, particularly since for the most part, APLP doesn’t carry sound (or lights), which remained the case with this tour. “Even if we did,” Parsons says, “we’re still at the mercy of the acoustics of the venue. We try to be as high fidelity a live act as possible. It’s not always easy, but I try to make sure we have the best engineers possible who will achieve the best results they can with the equipment they have.”