Additional lessons from a series of outdoor chamber music concerts, this time working at a not-so-normal site requiring creative microphone approaches, loudspeaker placement on the fly, and more.

In my previous article, “The Great Outdoors: An Adventure In Orchestral Sound Reinforcement,” I provided a look at some of the challenges and goals of reinforcing outdoor orchestral performances that I discovered in working with the Cincinnati Chamber Orchestra for its Summermusik Festival – a collection of unique outdoor chamber music concerts throughout the city over a period of two weeks with the aim to bring the music to the people.

The initial profile detailed what happened in a relatively “normal” venue, but this time, I’m going to provide details of working at a not-so-normal site hosting two evenings of music – a small chamber string ensemble and a rock band playing tunes by The Beatles accompanied by a string trio – at an amusement park.

“The Fab 5 & Friends Featuring The Music Of The Beatles” was performed by an exceptional string trio of cellist Tom Guth, violist Heidi Yenney, and violinist Amy Kiradjieff accompanied by a stellar three-piece rock band led by the guitarist and vocalist Roger Klug joined by bassist Aaron Jacobs, and drummer John Taylor.

To get ahead of expected challenges given the close proximity of the musicians, I reached out to bandleader Klug to chat about some approaches that begin with the musicians, before thinking about gear. We discussed where the musicians would feel most comfortable on stage, and then I looked at all the instrumentation and explored how we might mitigate bleed without negatively affecting their playing and “feel.” My goal was to support their ability to maintain their tone and style that took a lifetime to develop. For example, simply adjusting the position of a directional guitar amp six inches can make quite a difference.

Once a general layout was agreed upon, I asked drummer Taylor to consider bringing dryer, darker cymbal choices, which he ended up delivering in spades. Bassist Jacobs came prepared with an excellent pickup and a DPA microphone combo for his acoustic bass as well as small but powerful amplifiers and cabinet choices for both his upright and electric instruments. I suggested a bit of low-end roll off to help keep the rumble down on the hollow, wooden stage.

The venue, Moonlite Pavilion, is smack dab in the middle of an active amusement park called Coney Island in Cincinnati. It’s a large, covered open-air picnic shelter with a reflective metal roof and marble floor, with our three-foot-high carpeted stage located on one of the short sides. The venue has loud and distracting industrial ceiling fans to keep the air moving, while staff was cleaning up the surrounding grounds with leaf blowers at exactly the same time it was important for me to listen to the sound system. After systemically disabling a few of the noisy fans, I found a small slice of “Radina Quiet Time” to actually listen critically, fine tune loudspeaker location choices, and set delay times.

Thanks to audio provider Grant Cambridge at Event Enterprises, I decided to deploy a single Yamaha DXR12 compact active loudspeaker per side on a stick with the 7-degree down-tilt option in front of the downstage edge “line.” The seated audience area was wide, so I filled in the center with a smaller DXR10, and also clustered a pair of Yamaha DXS18 subwoofers in cardioid mode for a bit of low kick reinforcement. Another pair of DXR loudspeakers on stands about 30 feet from the deck served as delays, and I patched into a set of the venue’s ceiling loudspeakers for just a bit of fill in the back.

My goal was to get the combination of all these loudspeakers and the sound off the stage to “play nice” with one another in the time and frequency domain, so I reached out to fellow audio friend Nathan Lively of Seeing Sound for some support with Rational Acoustics Smaart. After some measurements and a bit of tweaking during my very limited “quiet time,” I settled on a nice combination of delay and level.

A proper front of house location in the audience wasn’t viable, so the good ‘ol side stage FOH with an iPad did the trick, working with a compact Yamaha QL1 console. Wireless RF “sticks” for the emcee, plus an assortment of mics, active and passive DIs and sub-snakes placed carefully, helped keep the stage cabling clean.

I wasn’t familiar with the program and was prepared for the best and worst-case scenarios when it came to microphone choices for the strings. Although I was able to achieve a warmer string sound with an overhead mic, the bleed and gain before feedback made it challenging to keep the strings present within the rock band instrumentation.

Therefore, I resorted to clip-on mics for these instruments. I didn’t have access or time to rent additional dedicated clip-on mics that were needed, so I devised a fast punt. My handful of Sennheiser ME2 and Countryman B3 lavalier elements could do the job, but they required some “gadgetry” to make them suitable in this application. I came across the affordable and professional DPA MHS6005 microphone mounts as well as RODE VXLR+ 3.5 mm-to-XLR adapters. After some general testing of the integrity of this setup, I was satisfied with it and deployed the mics on string instruments where needed.

To accommodate musicians coming on and off stage, the mic “rig” remained attached to the instrument and the musicians were instructed to simply “unplug or plug in” (with my watchful eye on the mute button, of course). In addition, I used traditional Shure SM81 overhead mics on each instrument for quieter parts and pieces, and where appropriate, I experimented with a blend of the clip-ons and SM81s.

Yamaha’s dynamic EQ helped in taming the 2 to 6 kHz region of the string section, as well as at 160 Hz. Some creative uses of groups and DCAs kept the management of levels easy and accessible via a single page/view on the iPad.

To keep the drum microphone choices simple, I used a bit of noted studio engineer/producer Glyn Johns’ method – a Shure KSM32 to the drummer’s right, aimed across and matching overhead facing his snare. I also deployed a Shure SM91 in the kick.

The second performance at this venue, titled “Her Voice” didn’t require as much effort to reduce bleed as with The Beatles show, although I still faced the same venue challenges and a plea for “quiet time.” “This performance was curated by CCO conductor Eckart Preu, who performed on keyboard. The afternoon featured CCO strings concertmaster Celeste Golden, associate concertmaster Sujean Kim, and section principals Heidi Yenney and Patrick Binford. Complimenting the strings were principal flute Rebecca Andres and principal trumpet Ashley Hall.

A nice surprise was the introduction of a unique instrument called the “viola d’amore” played by the talented Yenney. This baroque instrument has seven strings and an equal number of sympathetic strings located below the main strings for a total of 14 strings – and quite a beautiful sound.

The challenge was the lower acoustic output, especially of the sympathetic strings. The crowd was large, and it was necessary to project the nuances of this instrument. I chose to use the clip method with an SM81 above. I think the combo worked great — the audience, including myself, were in a mesmerizing space as she played.

I also stuck with the SM81s above for each player as well as a standing mic position for the guest soloist. A keyboard was used in lieu of an acoustic piano, which employed a stereo passive Radial and a DXR10 for just a bit of foldback for the players. I did attenuate a bit of 1 to 4 kHz on the piano channels to leave some sonic “space” for the miked strings.

With the leaf blowers, runaway fans, heat and metal roof, we all worked in harmony to produce unforgettable musical experiences. The final installment in this series is a performance featuring woodwinds at the Cincinnati Zoo (with exotic animals) as well as a jazz organ trio with full brass section at a beautiful park in another picnic shelter, although this time with high wood ceilings. Stay tuned for more exciting venue challenges! 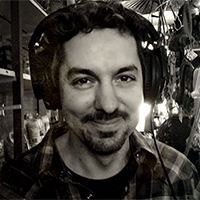 Nicholas Radina is a long-time audio engineer and musician based in Cincinnati who also tours as the monitor engineer with the band O.A.R. He invites your input via his website at NicholasRadina.com. Sign up for his upcoming educational workshop at SoundNerdsUnite.org.
All Posts
PrevPreviousSolid State Logic Introduces New DeEss Plugin For Vocals, Instruments & More
NextNew Concert Hall At Leading Music School In Poland Equipped With CODA AudioNext
Study Hall Top Stories
Explore All Study Hall