For Gardot’s act on the Arena Stage, the bassist used a bridge pickup run through his SWR amp, and the speaker was miked with an AKG D 112. At the Garden Stage, when possible, the instrument pickup was supplemented with a mic on the instrument, or on the amp’s speaker.

There was nothing unusual about guitar miking; typically it was handled with an SM57 on the guitar amp, aimed toward the outer edge of the speaker cone. No acoustic guitars were observed at the festival other than a nylon-string guitar using a bridge pickup and DI played for one tune at the arena stage, and most were semi-hollow body electrics.

Visceral Feel
Engineers mixed a wide variety of acts, ranging from quiet duos to big bands, and each with their own styles, stage levels, and requirements. For example, trumpeter Christian Scott and his band appeared on the Night Club stage, with instrumentation including drums, acoustic bass, acoustic piano, electric guitar, and trumpet.

During the majority of the sound check, the band leader went out into the audience seats to call his preferences as each instrument was dialed in, and the combo played. According to house engineer Mark Speen, the artist preferred to push the bass frequencies up a bit to provide a more visceral feel. The music itself had plenty of drive, and levels were close to that of a rock act.

The electric guitar was played through an onstage amp with an SM57 aimed toward the center of the speaker and run with only slight EQ. For the piano, miked with a pair of KSM27 overheads and an ATM25 “in the hole,” the high mids were pushed to “shine above the guitar a little.” A slight pan was also used to separate the instruments since their frequency ranges overlapped. 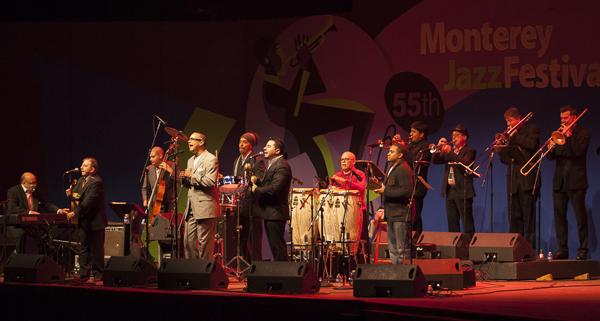 The Eddie Palmieri Salsa Orchestra on the Arena Stage, with all acoustic instruments getting dedicated mics. (click to enlarge)

The bass had a bridge pickup which was routed to the console through a Countryman passive DI, while the drum kit was captured with a D 112 on kick, an AKG dynamic on the snare, and a pair of Shure SM81 pencil condensers for overheads. Scott supplied his own CAD E100 mic for his trumpet.

At the same stage earlier in the day, a duo consisting of guitarist Mimi Fox and flautist Ali Ryerson had a simple setup consisting of an SM58 on the flute and an SM57 on the guitar amp. The resulting musical rapport was extraordinary, and the sound was great.

Later, Tierney Sutton and her long-term band brought yet another musical flavor with acoustic piano, acousticelectric bass, drums, and vocals. The same piano and miking as with Scott’s band was taken, but with more emphasis placed on the overhead mics. A DI to the console captured the bass, and the drums featured an Audix D6 kick mic, SM57 for snares, and pencil condenser overheads.

Sutton, seated on a stool, sang through a KSM9, with a pair of floor monitors bringing the band to her. Behind her, the band was arranged on a diagonal so that they had visual contact, with the bassist sandwiched between the piano and drums.