Malgieri explains that the choice of mics used with any given act is a judgment call based on the orchestration and physical setup of the band. He prefers using omni mics and studio miking techniques when possible, but if a drum kit is nearby, then a “sliding scale compromise” comes into play.

The other end of the spectrum, when using overhead mics is impossible, is to deploy the AMT pickup along with any other closely placed mics, and to high-pass the condensers at 1 kHz to 2 kHz for “crispness” and mix it with the DI feed from the AMT system’s preamp.

In this case he is likely to use the fundamentals from the AMT, with the DPA 4060s or the AKG C 414s adding the top.

Move & Groove
McCune’s favorite mic for capturing solo horns is the Shure KSM27, and these microphones were used at most of the stages. The typical positioning is one to two feet in front of the instrument, and the engineers noted that they’re especially useful for players with plenty of volume and projection.

The player is free to “move and groove” from this distance without any appreciable change in audio response or proximity effect. The mic’s cardioid pattern and good isolation, plus its “natural sound,” were given as reasons for the choice.

When miking horn sections at the festival, mics were either placed one per player or “split chairs” when the sections were large – such as having five players share three mics. Several big bands played the Garden and Dizzy’s Den Stages, requiring a significant quantity of microphones. 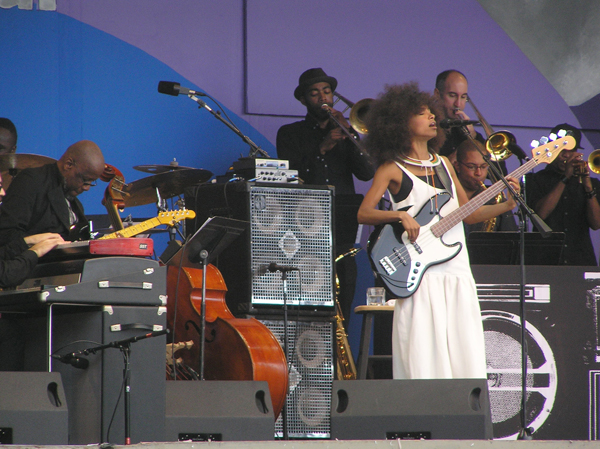 Esperanza Spalding and band on the Arena Stage, providing a view of some of the mic approaches. (click to enlarge)

Sennheiser MD 421s were used for saxophones and sometimes for trumpets and other horns (run either flat or with the highs slightly rolled off ), with Shure SM57s as the “workhorse instrument mic” for trumpets and trombones, and the occasional Electro-Voice RE-20 for lower frequency brass. A KSM27 was typically placed up front for soloists.

At the Garden Stage, which is outdoors, the majority of the mics are high-passed at 80 Hz, mainly to minimize wind noise. As one engineer told me, “with 40 open mics, if anything will be a problem it will be the low end.” Also, the channels are generally run closer to flat outdoors, since without the reflective surfaces and potential room resonances there is less need for corrective EQ.

Drum miking trended toward simplicity at the smaller stages, with the kick and snare individually miked and a pair of overhead condensers capturing the cymbals and toms. The AKG D 112 was predominantly used on kick, although an Audix D6 was also observed for one act. Snares were typically miked with the SM57, while overheads ranged from C 414s to Shure SM81s and KSM27s or KSM32s.

On the larger Arena Stage, additional mics were used on individual toms in some cases, using small condensers with short goosenecks clipped to the rims and aimed toward the outer edge of the drum heads. Melody Gardot’s drummer deployed a C 414 on a stand angled at about 30 degrees and about 6 inches away to capture the snare; the percussionist used a set of Audix percussion mics to capture his wide variety of instruments.

To reproduce the acoustic bass, either a bridge-mounted pickup is used (already installed on the instrument by the artist) through a DI, or a small microphone is placed under the bridge. Malgieri favors the DPA 4060 omni mic for this purpose, and considers it his “Swiss Army knife” for concealed, closely miked applications.