Another technique, explains Marian Colbeck, house engineer at the Garden Stage, is to set up the console with a “festival patch.”

From left to right across the console, groups of channels are designated and labeled for particular instruments for the duration of the event. Drums, bass, piano/keys, guitars, lead vocals, backing vocals, horns, and so on each have specific channels to patch into.

If a particular act does not have a certain instrument, or fewer than the allotted channels, then those channels are skipped. For the big bands, with multiple mics for the saxes, trumpets, trombones, and other brass, channel sections on the right side of the console are reserved.

The Tradeoff
Veteran stage technician Brian Alexander specializes in piano, having worked extensively with Chick Corea and several other artists, and he spent the show at the Arena Stage.

On the subject of compromise in audio capture decisions, he points out a “contention” between audience sound and artist sound – a tradeoff between the aesthetics that are most pleasing to the musician and their sound and what can be delivered to the main loudspeakers (and thus the audience) given the stage setup, the venue acoustics, and the interactions with the other instruments on stage.

Alexander adds that it is all about balancing needs by making the artist comfortable while providing sufficient level, quality, and isolation to the individual instruments. With TV screens and broadcast becoming a norm for live shows, visual sight lines for the TV producers are an additional consideration for miking.

“It’s a strange, interesting world behind the curtains, requiring multi-tasking people who can make something happen right now,” he notes.

The piano is a central instrument to many of the acts performing at the festival, and its sound helps define the jazz genre. Two intertwining goals of piano miking are to capture the natural timbre and range of the piano while minimizing bleed from other instruments into those microphones. 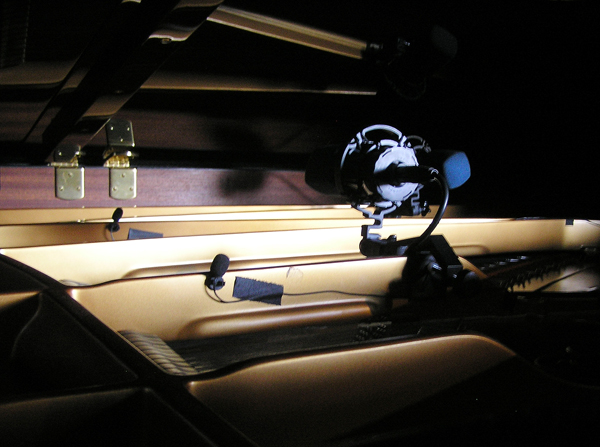 Interior photo of the piano miking at the Arena Stage. (click to enlarge)

At the festival, a combination of closely placed omni mics, ambient cardioid condenser mics, and soundboard pickups are used either by themselves or in tandem to achieve sufficient level along with adequate isolation to the piano.

The Arena Stage piano was miked in such a fashion. Four AKG C 414 side-fire condenser mics were used, with one pair mounted on either side of the soundboard with the microphone’s diaphragm pointing downward and in toward the center of the soundboard, capturing the lower and higher strings.

The second pair was mounted on the propped-open lid, affixed to the upper bracing, again angled down toward the soundboard on the low and high side; these more distant mics were to provide ambience when stage levels were low enough to prevent significant bleed.

Two DPA 4060 miniature omni condensers were positioned on ribs of the soundboard “harp” approximately six inches from the key hammers, and about a foot in from the low and high sides of the piano. The mic elements were pointed up toward the lid. An AMT M40 piano boundary mic system was placed through one of the holes in the harp onto the soundboard, and secured with tape to both hold it in place and prevent any rattle or buzz. The closely placed AMT provides isolation and the ability to raise the level on the piano when bleed-through with the other mics is too great or sufficient gain is not able to be achieved with them.

Rounding out the piano miking, a pair of Shoepps MK4 cardioid condensers on external tripod stands outside of the piano provides “air” when stage levels permit. All of the cables and connectors from the mics within the piano are run together in a bundle, and are clearly labeled so that the particular miking combination for each act can be selected and run to the monitor and main consoles.