The annual Monterey Jazz Festival is a three-day extravaganza where tens of thousands of music fans enjoy a variety of jazz acts on several stages throughout the grounds.

The most recent edition of the festival (the 55th), held late last year, saw stages ranging from two informal outdoor venues featuring simple audio systems in the entry courtyard and the concessions area to the 6,500-seat Jimmy Lyons arena with a concert stage, flown loudspeaker arrays, and full front-of-house and monitor stations.

Venerable sound company McCune Audio of San Francisco provided audio support for the festival, as it has for many years.

While delivering excellent sound reinforcement to the audience is a prime responsibility, it is equally as important to concentrate on the source of the audio itself – the musicians’ instruments and how they are captured.

This involves the selection of appropriate microphones for each instrument based on their frequency and dynamic ranges, maintaining sufficient isolation among the instruments, mixing the outputs of electronic and acoustic instruments, and balancing the stage requirements of the musicians with the house systems that present the results to hundreds or thousands of listeners.

I attended the festival to see first-hand how the sound team handles this highly improvisational musical form, and will focus on some of the equipment and techniques that bring the artists’ music to the audience – and that give the artists the intimacy to interact with each other musically on the concert stage. 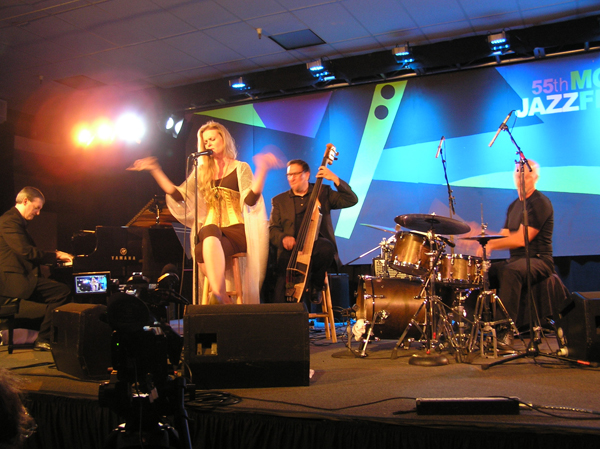 The Tierney Sutton Band on the Night Club Stage at the 55th Monterey Jazz Festival. (click to enlarge)

Mixing On The Fly
A reality of festival shows is that a number of acts, each with differing instrumentation and requirements, come to the stage with only a short break in between to place equipment and set up and confirm the miking, DIs, monitor mixes, and feeds to the front-of-house console.

Some elements are pre-set with stage plots, equipment riders, moveable drum risers in the wings, discussions with the musicians and their technical staff, and pre-show sound checks when time permits – but many decisions must be made on the fly.

At the Arena Stage, when the curtains close and setup begins for the next act, front-of-house engineer Nick Malgieri had several useful ways to monitor the action. Two side-stage cameras were focused on the setup area, and fed to a video monitor at the FOH position. 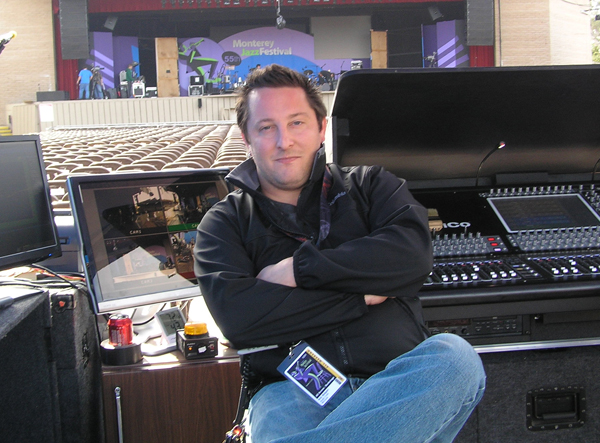 With the visuals, he was able to know where musicians and microphones= were placed, and how the audio capture was being set. Via the intercom system, he was able to talk with the stage techs and be informed of any changes.

The mains were Meyer Sound MILO line arrays, tuned to a flat frequency response, and Malgieri also had a replica of this system at FOH, allowing him to pre-mix the next act on his DiGiCo SD10 console as the mics were placed and tested. He monitored through a pair of Meyer UPM-1 loudspeakers, equivalently tuned, set up so that the audio response of the mains and his monitors can translate back and forth. Malgieri notes that this method is “a huge tool” because he’s not able to sound check all of the acts.

Both models designed with a dynamic, low-mass moving coil assembly and injection-molded shells that are internally textured and ported for added acoustic control and ...read more →

Joined by a companion subwoofer that also comes equipped with a six-channel mixer in a package that's driven by up to 1,200 watts of ...read more →

A lively conversation about design, mixing, and careers in technical theater, going inside an A/B system design, and more.