In what was a comprehensive search for the perfect amplifier platform, Rodriguez primary requirement was a flexible system that was both efficient and musical. He found the Powersoft X4 to be perfectly suited for this.

“When I first tested the X8 and X4 amplifiers with our new large-scale line array system, I was amazed by the overall power of the X Series,” Rodriguez says. “On top of that, the clarity and musicality of the system — combined with the fact that no sonic colorization was being added from the amplifiers — really solidified the deal for us.”

“Our line array system is a 4-way box, and the X Series 4-channel amplifiers basically allow me to configure 4 boxes per component per channel,” Rodriguez explains. “I can use 4 of the complete 12.2. boxes with one X4 which is great because it saves us so much amplifier rack space.”

In addition to powering the FILA 12.2’s, two X4 units were used to power four of Mode Audio’s BPM-218 subwoofers. As a result, Rodriguez also had power front of mind when selecting the X4 units for the system which featured 10-15 dB headroom. “The headroom we had was just amazing,” he says. “The X Series amps never sounded like they were choking or stressing for power so that also made them a good fit for the system.”

For ease of use and peace of mind, X4 amplifiers come equipped with Powersoft’s ArmoníaPlus System Manager software which allows for remote control and monitoring of Powersoft’s full range of products. 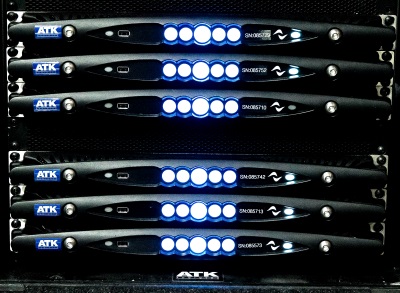 “Using the Armonía software helped make everything run even smoother,” Rodriguez says. “Because this was the first event where we were showcasing the new line array system, it was great to have this support from Powersoft to insure everything ran even smoother.”

With debut of the FILA system and the first pairing of Mode Audio and Powersoft now in the books, Rodriguez said he couldn’t have been happier with the results.

“The whole night went great,” he says. “It was a great show, and the sound quality from the X Series was amazing — so much so that even the band’s sound engineer was extremely satisfied with the sound, and that of course gives me great satisfaction.”